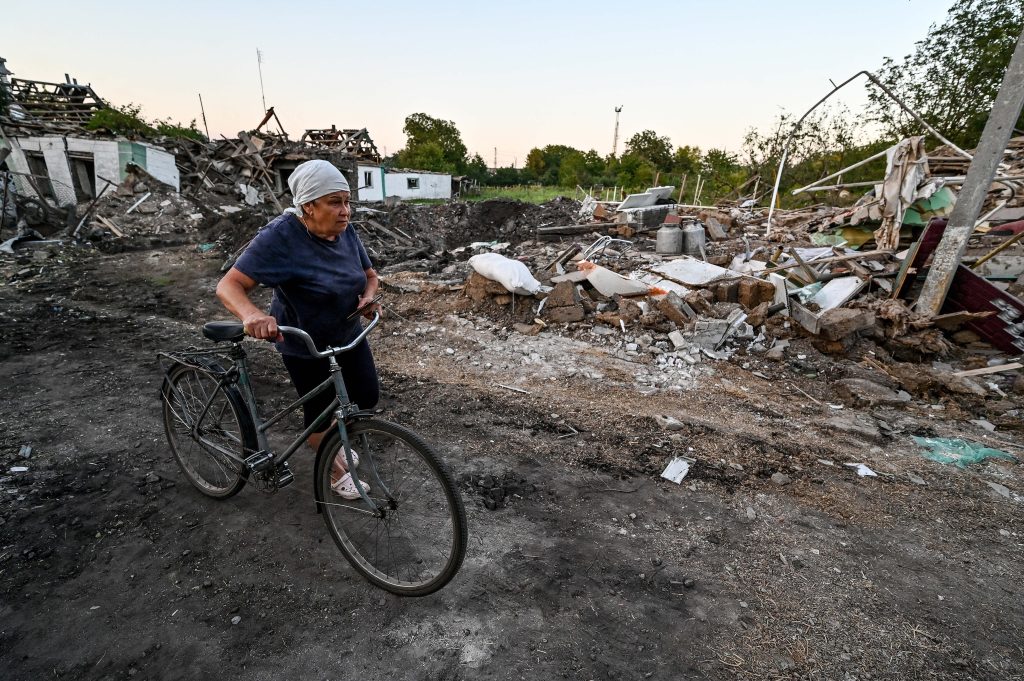 The Air Force of the Armed Forces of Ukraine said that during August 24’s Ukrainian Independence Day celebrations, the Russian Air Force carried out more than 200 flights to simulate missile strikes on the territory of Ukraine in order to activate air sirens and sow panic among the population. In the midst of this, a Russian missile attack at the railway station in the central Dnipropetrovsk region killed fifteen people and wounded another fifty. The attack occurred in in the village of Chaplyne, which is far from the front lines, and there are no known military sites in the area.

Meanwhile, Russian authorities deployed security forces in the Luhansk region, probably in response to decreasing support for the war and the increasing reluctance among local residents to fight outside the province. The Ministry of the Interior of the so-called Luhansk People’s Republic (LPR) announced on August 23 that its staff had carried out joint patrols with police units from the Interior Ministry of St. Petersburg and Leningrad region in Starobilsk, Schastia, and Stanytsia Luhanska. The previous day, it announced that Russian national guard units maintained security during the celebration of the Russian Banner Day in Starobilsk.

While news reports speculate that the General Staff of the Armed Forces of the Russian Federation are insisting on a general mobilization, evidence for such a move remains unclear. The Russian army still worries that announcing a mobilization would be a widely unpopular move, especially in western parts of the country. However, there is a need for military reinforcements on the front lines in Ukraine and the occupied territories, where resistance continues. On August 25, for example, President Putin signed an order for the Defense Ministry to plan for an increase of 137,000 troops as of January 2023.

Meanwhile, news broke that same day that the Security Service of Ukraine (SBU) arrested agents of the Russian Federation who coordinated the attack on Kyiv at the start of the invasion. According to the news reports, the SBU managed to neutralize the group, composed of residents of Kyiv. The press service of the SBU echoed these reports.

The Ukrainian forces also continued to shell military sites linked to the Russian army this week. On August 24, a military depot was hit in the city of Tokmak, currently under Russian control, in response to Russian shelling in the Zaporizhzhia region. Two days earlier, the Ukrainian army shelled positions in Russian-occupied Kherson. In Crimea, Sevastopol has been targeted multiple times with drones since August 21, while in Donetsk, a munition depot was destroyed in a Ukrainian army rocket attack.

Against this backdrop, Russian forces continue to make slow progress. After several weeks of false reports that the Russian army had taken over the village of Pisky, they were finally successful on August 23, when Russian and Donetsk separatist forces occupied the village after heavy fighting. The Ukrainian army tried to regain control but has thus far been unsuccessful thanks to the Russian artillery superiority in the area.

On Ukrainian Independence Day, multiple pro-Kremlin Telegram channels and media posted a photo of a screen featuring a forged letter regarding casualties in the Armed Forces of Ukraine. The letter imitated a response from Valerii Zaluzhnyi, Commander-in-Chief of the Armed Forces of Ukraine, to Oleksiy Danilov, Secretary of the National Security and Defense Council. The forgery claimed that as of July 1, there were 76,640 dead, 42,704 injured, and 7,244 in captivity. This went against Zaluzhnyi’s claim that Ukraine has lost almost 9,000 soldiers.

The letter was debunked by Hanna Maliar, Deputy Minister of Defense, alongside fact-checking NGO StopFake and the Center of Strategic Communications. First, the letterhead is incorrect, so Zaluzhnyi would not have signed such a document. Second, the letter features numerous grammatical mistakes that suggest crude translations from Russian. For instance, the word “оборони” (defense) featured the Ukrainian letter “і” at the end of the word. This letter is located at the same button on the keyboard as the Russian letter “ы,” which goes at the end of the Russian version of this word. And instead of using the official name of the Armed Forces of Ukraine, the colloquial term “Armed Forces” was used, which is not something that would have been featured in the official correspondence.

This is not the first forgery to emerge from pro-Kremlin sources; the DFRLab has covered several similar cases. Notably, some pro-Kremlin sources acknowledged that the latest letter appeared fake, identifying problems with the letter while sharing it anyway. RIAFAN and several Telegram channels avoided featuring the letter but described it as genuine and indicative of the Ukrainian army’s weakness. Another channel rounded up overall casualties to “nearly 200,000” total losses, though provided no evidence to support it. The exact total of Ukrainian casualties remains unknown.

Lev Gershenzon, the former head of Russian news aggregator Yandex.News, has launched a beta version of The True Story, an alternative service that reportedly will aggregate news content currently censored by Yandex.News.

In an August 22 Facebook post,  Gershenzon stated that the goal of the new project is to illustrate the major events of a day and provide links to media and social media coverage. According to Gershenzon, The True Story “ranks stories, headlines, and external content, but the choice – where to read the details, whose opinion to believe, and which one to disagree with – always remains with the reader.” This way, he continued, users receive not just atomized news, but “the opportunity to look at the event from different angles.”

The True Story’s about section highlights that it is independent and plans to hand over the tools for managing “their information bubbles” to individual users. The website indicates that the initial financial resources were provided by its founder and grants, and that the platform currently operates with the help of volunteers. In the future, it hopes to rely on financial support from users. The aggregator does not displaying advertising, arguing that ads “significantly worsen the user experience and make the service dependent on advertisers.”

The True Story runs a Telegram channel, which was created on July 6 and became operational on August 21. At the time of writing, the channel had more than 4,000 subscribers. It shares news aggregated on The True Story website, with posts garnering an average of three to four thousand views.

Lev Gershenzon was the head of Yandex.News from 2005 to 2012. Following Russia’s February 2022 re-invasion of Ukraine, he called the aggregator “a key element in hiding information about the war” and called on his former colleagues to quit and not to be “accomplices in a terrible crime.”

According to the independent Russian investigative outlet The Insider, Yandex recently sold its news aggregator and Zen platform to Russian social network VK.

Yevhen Balytskyi, head of the Occupation Administration in the Zaporizhzhia Region, signed an order defining Ukrainian citizens arriving in the occupied area as persons seeking temporary asylum on the basis of Russian law. The order requires the registration of Ukrainian and Russian citizens based on their residence or place of arrival in areas occupied by Russia and requires the distribution of temporary IDs to all “non-citizenship persons.” The Russian occupation authorities classify all Ukrainians entering the occupied territories in the Zaporizhzhia region as “refugees running from persecution” in Ukraine.

The order also identifies Ukraine as a separate country of which Zaporizhzhia is no longer a part. The wartime administration has effectively detached the region from Ukraine, violating international law and the human rights of the local population.

Meanwhile, the Krasnodar regional administration published information about a program in which Russian authorities transferred over 1,000 Ukrainian children from Mariupol to Tyumen, Irkutsk, Kemerovo, and the Altai region, where Russian families had “adopted” them. The administration added that more than 300 children are still waiting to “familiarize themselves with their new families” and that citizens who decide to adopt these children will receive a one-time bonus from the state. The announcement was later removed but Internet users captured screenshots of it.

The forced relocation of children is a violation of the Convention on the Prevention and Punishment of the Crime of Genocide.

According to a DFRLab analysis conducted using the social media monitoring tool Meltwater Explore, Italy was the top location of Twitter accounts using the hashtag #Dugina in reference to the death of Darya Dugina. Dugina was the daughter of Aleksandr Dugin, a Russian nationalist philosopher who developed the so-called “Russian World” ideology used by the Kremlin as an excuse to wage war against Ukraine.

The top retweeted tweets in Italian that contained pro-Russian and anti-Ukrainian or anti-Western sentiment were posted by accounts representing Italian far-right and far-left populists. One account, @AsaDragan, used the popular fascist slogan “Dio, Patria, Famiglia” in his bio, while @Qua_Agatha expressed anti-migrant and anti-vaxx sentiments. The account @antonio_bordin often shared anti-Western sentiments and populist criticisms of Italian Prime minister Mario Draghi, as did the account @tutinodavide. Anti–Ukrainian sentiment was expressed by the account @francescocantin.

Dugina died the night of August 20 in a car explosion that the Russian Federal Security Service (FSB) blamed on “Ukrainian special services” and a woman named Natalya Vovk, who they questionably alleged was a fighter with the Ukrainian Azov regiment, which Russia considers terrorist organization. At the same time, a Russian underground organization called the National Republican Army took credit for the car explosion, according to Ilya Ponamorev, a former member of Russian Parliament who voted against the annexation of Crimea in 2014 and went in exile to Ukraine.

These developments come at a delicate time as Italians are slated to elect their next parliament on September 25, and represents the latest evidence that the country shows a substantial weakness to Russian disinformation and others forms of interference. Recently, former Russian President Dmitry Medvedev urged Italian voters to “punish” their government for “opposing Moscow” through the electoral ballot. This wasn’t the first time he has attacked Draghi’s government, nor the first instance of Russian interference in Italian politics. The Parliament’s Intelligence Committee (COPASIR), in a report published this August, explained that Italy “could be used as a “picklock” to force and weaken the Euro-Atlantic front. “Damaging the country can also weaken its projection in the wider Mediterranean, so as to favor the growing Russian strategic presence in Northern Africa, the Sahel and the Balkans,” the report suggested.

Image: A woman pushes a bicycle past residential buildings destroyed in a Russian missile attack on Chaplyne urban-type settlement, Dnipropetrovsk Region, central Ukraine, August 24, 2022. The strike on the residential sector and the railway station carried out by Russian occupiers on Ukraine's 31st Independence Day claimed the lives of 25 people, including an 11-year-old boy and a six-year-old girl, while 31 people got injured. Photo by Dmytro Smolienko/Ukrinform/ABACAPRESS.COMNo Use Russia.