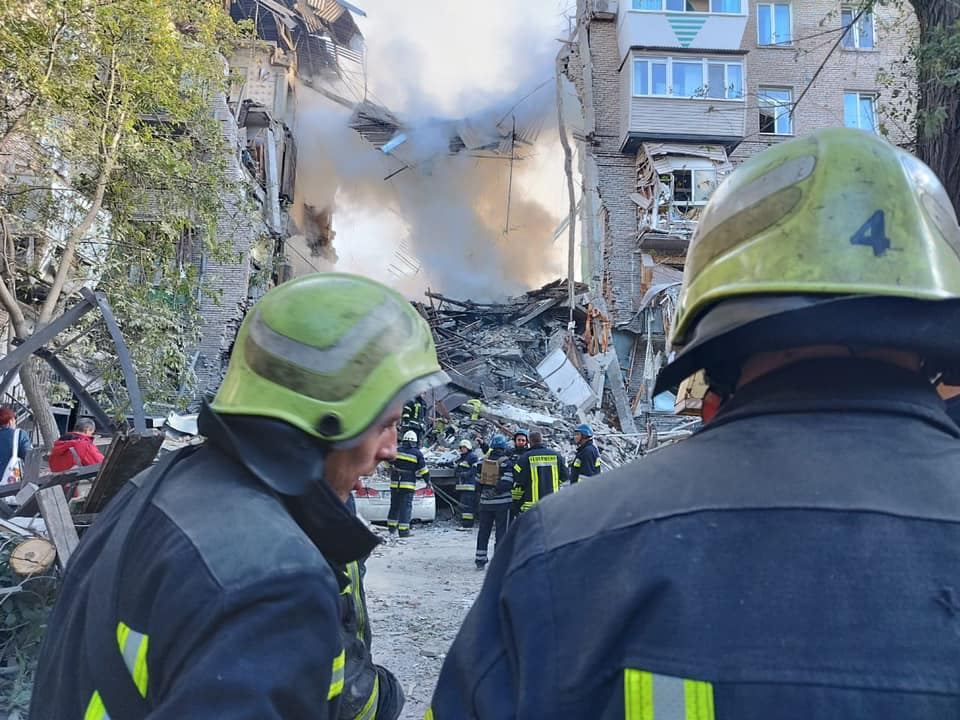 On October 5, the Russian army conducted another strike with an Iranian-made Shahed-136 drone in Bila Tserkva, Kyiv Oblast; this is the first strike in the Kyiv area since June. The strike resulted in the destruction of civilian buildings. This indicates that Russian forces are using advanced weaponry to target areas far from the active combat zones. The tactic of striking civilian infrastructure away from the frontlines has previously been used by Russia, presumably to add pressure on the civilian population and the Ukrainian administration. Ukrainian Brigadier General Oleksiy Hromov said that Russian forces have used a total of eighty-six Iranian Shahed-136 drones, of which, Ukraine has destroyed 60 percent; this has not been independently confirmed. In addition, for the first time since August, Russian Tu-22 M3 bombers reportedly launched Kh-22 missiles from Belarusian airspace against the Khmelnytskyi region.

In addition, Putin deferred mobilization for all students in Russia, including part-time and masters’ students. Putin’s motivations are not clear, but this could be the result of increasing domestic resistance to the mobilization. Putin criticized the defense ministry for difficulties with the mobilization’s roll-out.

Meanwhile, police in Russia’s major cities appear to be using surveillance software to search for men who have failed to report for military service. According to Astra Press, run by independent Russian journalists, on October 3 and 4, at least ten men suspected of “evading mobilization” were captured by surveillance cameras in Moscow. Four of them were detained by the police and sent to a military enlistment office.

Further, according to the United Nations, the humanitarian situation in Izium and Kupiansk “is extremely concerning following months of intense hostilities that have left behind a path of destruction.” In Izium, essential services have been decimated, leaving as many as 9,000 people in the town completely dependent on humanitarian aid. In Kupiansk, shelling and hostilities have forced more than 4,000 people to spend most of their time in bunkers and basements, with extremely limited access to vital items.

Following Putin’s recent announcement of a partial mobilization in Russia, citizens of the Russian-occupied Georgian regions of Abkhazia and South Ossetia questioned whether they would be included in the mobilization order. On October 3, Aslan Bzhania, the de facto president of Abkhazia, signed a conscription decree approving urgent military service for citizens aged eighteen to twenty-seven.

On September 21, the day of Putin’s mobilization announcement, a statement quoting Russian Defense Minister Nikolai Pankov circulated in Abkhazian Telegram channels. It claimed that Abkhazia wouldn’t be able to avoid the mobilization. The Abkhazia Ministry of Foreign Affairs said the statement was “fake” and a “provocation” to harm Abkhazia-Russia relations. On September 24, independent media outlet Meduza cited a “source close to the Russian president’s administration” to report that the Kremlin was considering the mobilization of citizens from Abkhazia and South Ossetia.

In South Ossetia, the de facto defense ministry denied reports circulating on Telegram that claimed servicemen of the 4th Russian military base, stationed in the South Ossetian capital of Tskhinvali, were handing out draft mobilization notices.

A Russian court on Tuesday fined TikTok for not removing “LGBT propaganda” that violated Russian laws.

Meanwhile, the livestreaming platform Twitch faces fines for publishing content about the war in Ukraine that Russia deems “fake.”

On October 18, the same court will examine two cases against Twitch, which is owned by Amazon. According to RIA, Twitch is accused of refusing to remove “fakes about the Russian army during a special operation in Ukraine.” The cases were initiated after Twitch hosted an interview with Oleksiy Arestovych, a military reporter and adviser to Ukrainian President Volodymyr Zelenskyy.

The latest legal actions are a continuation of Russia’s assault on Western technology companies. In July, a Russian court fined Google 22 billion rubles (USD $360 million) for failing to remove unfavorable content about Russia’s war in Ukraine.

A new mass grave was uncovered in the city of Lyman after it was recently liberated by Ukrainian forces. According to Ukrainian reports, the bodies have not all been identified, as they may have been left on the streets for a long period of time before burial.

In Zaporizhzhia, several people were killed in a rocket attack launched by the Russian army on October 6. Rescue operations continued throughout the day as people were believed to be buried under the wreckage.

For the second time in eight months, Burkina Faso was the scene of a military coup d’état. On September 30, Captain Ibrahim Traoré overthrew Lieutenant-Colonel Paul-Henri Sandaogo Damiba, who himself ousted the country’s democratically elected president in January after urging the then-president to hire Wagner Group to fight Islamist insurgents.

Social media sites in Burkina Faso saw an uptick in pro-Russian messaging before both the most recent coup and the January coup.

On Telegram, Kremlin propaganda channels with hundreds of thousands of followers praised the “joining of Ibrahim Traore and the country of honest people to the anti-colonial alliance with Russia.” These Telegram channels also claimed that Russia had effectively taken control of three West African countries – Mali, the Central African Republic and now Burkina Faso – from the “French neocolonial empire.” Following the coup, protesters, some waving Russian flags, attacked the French embassy in Burkina Faso and vandalized a French cultural center.

Notably, many Telegram channels stated that “Niger and its uranium mines are next in line.” On September 19, a protest in the capital of Niger saw Nigerien citizens calling for France’s removal while carrying Russian flags.

Image: Footage shows the aftermath of the morning shelling in Zaporizhzhia, Ukraine, on Thursday Oct 6, 2022. 7 missile strikes on Zaporizhzhia! Destroyed residential buildings, according to the State Emergency Service of Ukraine. Rescue workers are now combing through the shattered remains of one elegant five-storey apartment building. Zaporizhzhia regional head Oleksandr Starukh said one woman was killed. Another seven people, including a three-year-old child, were injured. The Ukrainian-held city is the capital of the eponymous Zaporizhzhia region, which Russian President Vladimir Putin earlier this week declared annexed, along with three other Ukrainian regions - Donetsk and Luhansk in the east, and Kherson in the south. Ukraine and its Western allies condemned the move. Moscow does not fully control any of the four regions, and in recent weeks Ukrainian troops have made significant advances in the the country's north-east and south. (State Emergency Service of Ukraine via EYEPRESS)