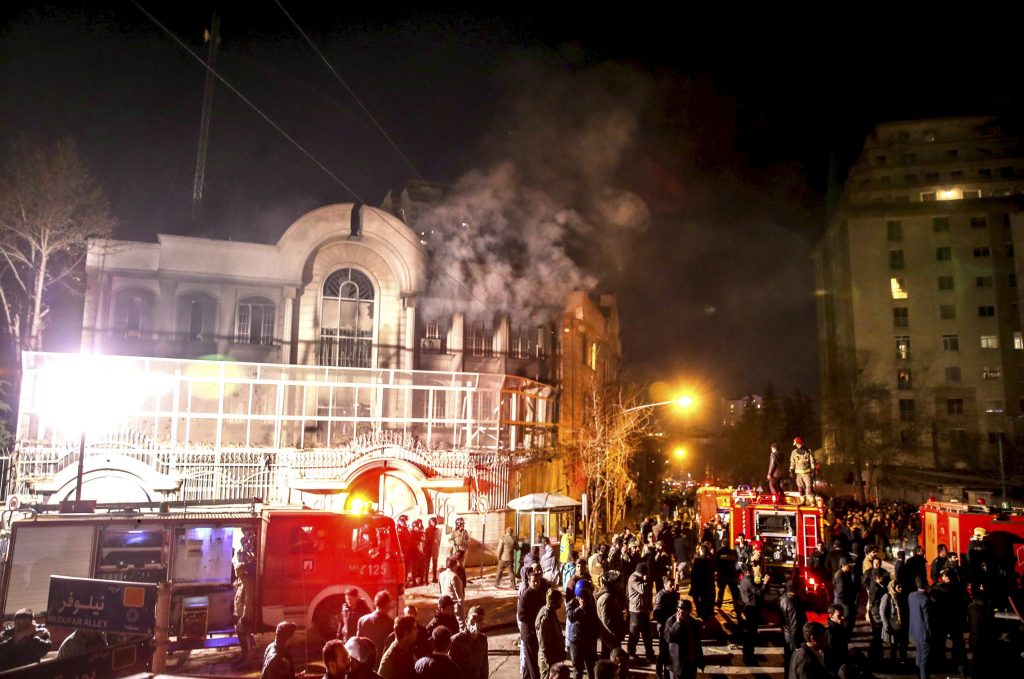 A mob set the Saudi embassy in Tehran on fire during a demonstration on January 2 over the execution of Shi'ite cleric Sheikh Nimr Baqr al-Nimr in Saudi Arabia. (Reuters/ Mehdi Ghasemi)

The deepening rift between Saudi Arabia and Iran may have dire consequences for global oil markets because the kingdom’s Eastern Province, where the Shia are in the majority, produces most of its oil. Production would suffer if Iran were to foment unrest among this population.

This crisis between the Middle East’s two major oil producers coupled with the slowdown of the Chinese economy make up the ingredients of a perfect storm for oil in 2016.

The execution of a Shi’ite cleric, Sheikh Nimr Baqr al-Nimr, in Saudi Arabia prompted an angry response in Iran where mobs ransacked and burned the Saudi Embassy. Saudi Arabia, Bahrain, and Sudan responded by breaking off diplomatic relations with Iran; the United Arab Emirates and Kuwait recalled their Ambassadors to Tehran.

This is the latest chapter in the conflict between Iran and Saudi Arabia, who first clashed over the Saudis’ stewardship of Mecca in the 1980s and again last year during the Hajj pilgrimage when more than 700 people were trampled to death and over 900 injured.

The Sunni-Shia conflict has already claimed hundreds of thousands of lives and created millions of refugees. Deepening tensions between Riyadh and Tehran may aggravate this conflict throughout the Middle East and drag in the United States and Russia.

Saudi Arabia and Iran have long been at odds with each other. However, a rupture of this magnitude has not occurred since the late 1980s.

This latest rift will set back US efforts to end the war in Syria where Saudi Arabia favors the ouster of Syria’s embattled President, Bashar al-Assad, who is backed by Iran. There may also be serious implications in Yemen where Saudi Arabia is waging a war against Houthi rebels who are aligned with Iran.

Meanwhile, a drop in China’s Caixin Purchasing Managers’ Index (PMI) on January 3 suggested a slowdown in the Asian giant’s economy. China’s economy, while growing, appears to have slowed down every year since 2013. This will lead to a decline in demand for oil in the fastest-growing BRIC economy and the second largest in the world.

Riyadh and Tehran have long competed for dominance in the global hydrocarbon markets. An escalation of tensions in the Strait of Hormuz, through which roughly 40 percent of the oil traded worldwide is transported, and which Iran has the strategic advantage of controlling, would drive shipping and insurance premiums up in the Gulf.

Geopolitical tensions in the Middle East typically cause oil prices and insurance premiums to spike as traders worry about supply disruptions. In this case, the worry is justified because two major oil producers and the founding members of the Organization of the Petroleum Exporting Countries (OPEC) are involved.

Iran and Saudi Arabia are, however, likely to keep pumping oil at a fast clip in order to cover their growing budget deficits. The OPEC has refused to cut production to lift prices. The Saudi-led cartel is trying to squeeze out higher-cost producers: in the US shale patch, Russia, and everywhere else.

Iran, having had its oil trade curtailed for years by sanctions, is eager to boost production as sanctions are lifted under a nuclear deal concluded last year. Iran plans to increase production to 1.5 million barrels a day in 2016.

Iranian-Saudi friction will likely increase Russia’s role in the Middle East because Moscow is trying to expand weapons deals with the Islamic Republic. Russia and Iran already have a contract for S-300 long-range surface-to-air missile systems, which can be used to protect Iran’s nuclear sites. The two countries are also discussing the sale of the state-of-the-art S-400 Triumph air defense system.

The Obama administration should have the peace, stability, and prosperity of the Middle East as its paramount foreign policy goal. It is in Washington’s interest to keep oil production in the Gulf safe and sound, which means preventing Iranian expansionism and aggression. Tehran is a source of instability from Yemen to Bahrain, and from Iraq to Syria and Lebanon.

The United States should strengthen its military posture and stand by its allies in the Gulf despite intense budget pressures, the Russian challenge in Eastern Europe and Syria, and a commitment to focus on the Asia Pacific region.

Superpowers must be able to walk and chew gum at the same time.