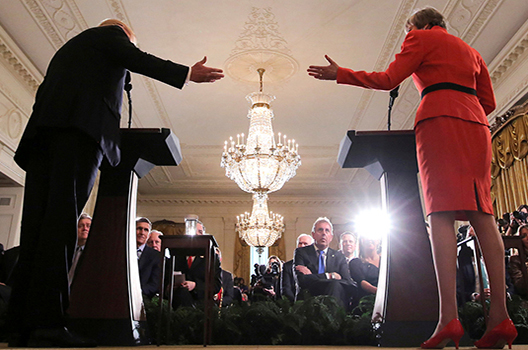 London’s top representative in Washington has resigned his post after unprecedented pressure from the White House against a top US ally, the latest sign of an increasingly rocky special relationship.

Sir Kim Darroch, the United Kingdom’s ambassador to the United States since 2016, announced his resignation on July 10 after days of pressure over comments he made about US President Donald J. Trump in a series of secret diplomatic cables—leaked to The Daily Mail and published on July 6—that described the US president as “incompetent,” and his administration as “uniquely dysfunctional.”

Trump responded to the leak by attacking both Darroch and outgoing British Prime Minister Theresa May on Twitter, promising that his administration “will no longer deal with” Darroch. Trump later described Darroch as a “wacky Ambassador that the UK foisted upon the United States.”

“I deeply regret that my successor, Kim Darroch, feels he has to resign,” former UK ambassador to the United States and Atlantic Council Distinguished Ambassadorial Fellow Sir Peter Westmacott said.  Darroch “has done nothing wrong,” Westmacott argued, as Darroch “was simply doing his job, very well.” Damon Wilson, executive vice president of the Atlantic Council, said that “the resignation of Sir Kim Darroch is unfortunate as he was an outstanding civil servant and steward of the US-UK special relationship.”

Westmacott blames the situation on “whoever improperly, and perhaps illegally, leaked the classified messages sent to London by the Washington embassy,” as well as Trump “for over-reacting to the evidence that Sir Kim, like every ambassador around the world, was doing what he was supposed to do by reporting on the local situation—with what one US senator told me he considered ‘typical British understatement.” Darroch’s position was ultimately untenable, Westmacott argued, because “politicians in the UK [failed] to give [Darroch] the unequivocal backing he deserved.”

Despite insistence from Theresa May’s office that the ambassador had the prime minister’s “full support,” Darroch admitted in his resignation letter that the pressure “is making it impossible for me to carry out my role as I would like.” He decided to resign, he said, because “in the current circumstances the responsible course is to allow the appointment of a new ambassador.”

Darroch had “been put in an impossible place by the leaks, the White House comments, and by the lack of support he has received from the UK government or the candidates for conservative leader,” Atlantic Council Vice President of Communications Andrew Marshall said. “Sir Kim has done the right thing,” Marshall argued, “because the relationship with the United States is at the end of the day more important than the individual.”

For Westmacott, “part of the tragedy that has now befallen Sir Kim’s career is that he appears to have been caught up in the political crossfire in Britain as opposing factions argue about how, or whether, to deliver Brexit.” In the aftermath of the leaks, Westmacott explained, Darroch was attacked by hardcore Brexit supporters who “said that the leaked documents showed that Sir Kim had poor judgement, wasn’t fit for the job, and should be replaced by a Trump-supporting one of their kind.” The potential political motivations for the leak make it “critical that the enquiry into who handed the [leaked] documents to The Mail on Sunday, and why, reaches a conclusion,” he argued.

“A conclusive investigation and a clear message from political leaders that they still support the tradition of a non-partisan public service are critical if diplomats and other officials are to continue to feel able to speak truth to power without fear of favor, retribution, or leak,” Westmacott maintained.

Troubled Times for the Special Relationship

The row between Darroch and the White House comes just weeks after Trump’s official state visit to the United Kingdom when the US president labelled the UK-US relationship as “the greatest alliance the world has ever known.” Despite the praise, both countries have found themselves increasingly at odds over issues such as trade, the nuclear threat from Iran, and the potential use of Chinese 5G technology in the United Kingdom.

“The US relationship is one of the most precious assets that the UK has,” Marshall explained, adding that “no one in London is under any illusions about how potentially fragile it is, and how much less it weighs on the minds of their American counterparts, especially now.”

Westmacott cautioned that there is “no reason why there should be lasting damage to the bilateral relationship—there is just too much substance to it for that.” But he warned that there has been significant damage, as Trump’s “disobliging remarks about both Prime Minister May and Ambassador Darroch are hardly the payback people in the UK expected for the state visit enjoyed by the Trump family just a month ago.”

Wilson argued that “the leaking of secret diplomatic observations should not have overshadowed the deep trust and expansive cooperation between the United States and the United Kingdom. At a time when there is considerable uncertainty about the United Kingdom’s place in Europe and looming great power competition with Russia and China, Washington must make every effort to make sure nothing comes between it and one of its most important allies.”

A new prime minister and a new ambassador may warm relations with the White House in the short term, but the disagreements between both sides will still need to be navigated, as London and Washington adjust to a new geopolitical era and attempt to ensure that their historical special relationship continues to thrive.

“The United States has always been able to count on the United Kingdom and vice versa; we must endeavor to make sure that remains the case,” Wilson said. “The challenges we face are ones we will always want to face along with our British allies.”