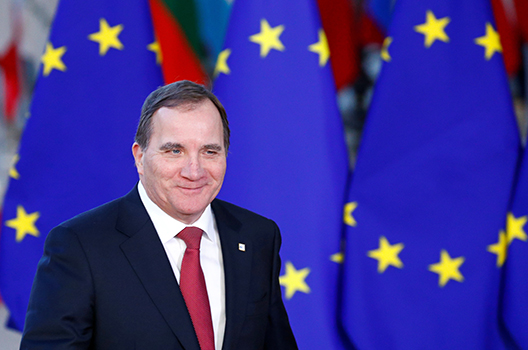 Support for the European Union (EU) remains high in Sweden. Recent polls show that while 65 percent of Swedes support EU membership, only 19 percent would like Sweden to leave the Union. As a result of this strong public support, Sweden’s two most Eurosceptic parties, the Left Party (part of the European United Left/Nordic Green Left or GUE/NGL group in the European Parliament) and the Swedish Democrats (part of the European Conservatives and Reformists  or ECR group in the European Parliament), have abandoned their demand that Sweden ought to leave the EU, instead saying that they would work from inside the Union to shift it in their desired direction.

The Swedish principle of “lagom,” meaning just the right amount, is visible in the debate ahead of the European parliamentary elections on May 26. The Christian Democrats (part of the European People’s Party or EPP group in the European Parliament) has chosen “Make the EU lagom again” as its slogan.

All parties, apart from the Liberals (part of the Alliance of Liberals and Democrats for Europe or ALDE group in the European Parliament), remain reluctant to further EU integration and are campaigning on platforms that seek to balance power with Brussels.

A second issue of discussion is the creation of a European pillar of social rights. A third topic is the fight against right-wing extremism, widely debated among the mainstream parties, although voters seem to be less concerned. The Swedish Democrats are declining the idea to form a new nationalist group in the EU parliament with the parties of Italy’s Salvini and France’s Le Pen.

Overall, the Swedish debate on the EU has been criticized by experts and journalists for failing to address central questions, such as how the EU should prevent another economic crisis and how the deepening defense cooperation could progress further. With a debate that lacks focus and vision for the EU, the results of the European elections will likely reflect support for the parties’ domestic agendas.

Sweden currently has twenty seats in the European Parliament. This would increase to twenty-one when and if the United Kingdom leaves the EU. A look at the polls ahead of the May 26 elections shows the Swedish Democrats likely to take over from the Moderate Party (part of the EPP) and become the second-largest represented party in the new European Parliament.  However, pro-EU parties will likely retain a clear majority with twelve seats against the eight seats won by Eurosceptic parties.

In the last European elections in 2014, 51 percent of eligible Swedes voted, which was significantly higher than the EU average turnout of 42.6 percent. This year, voter turnout could go either way. It could increase as a consequence of the rhetoric about right-wing nationalism, but there is also the possibility that turnout will be low as a result of political fatigue following the protracted process of forming a government in Sweden—a process that took four months after elections in September 2018 but produced no clear winner.

For Swedes, the most important issues in the European elections are climate and migration. A higher ambition for climate action, both nationally and on an EU level, is an issue that has long engaged Swedish voters. In the 2014 European parliamentary elections, the Green Party (part of the Greens/European Free Alliance group in the European Parliament) won 15 percent of the vote mainly due to its focus on climate action. Today, climate has taken an even bigger place in the Swedish debate. Parties compete to be the most ambitious on the issue, although they disagree on the ways the EU could become a climate leader.

The issue of migration is prominent because Sweden, alongside Germany, took in many of the migrants that arrived in Europe at the peak of the migrant crisis in 2015. According to the Swedish Migration Agency, 163,000 migrants applied for asylum in Sweden in 2015. Going forward, a central issue for every Swedish political party will be how to create solidarity within the EU on this issue and how to handle future waves of migrants. Many political parties want to strengthen borders as well as create a common asylum system that equitably shares the migrant burden across the EU.

Anna Wieslander is the Atlantic Council’s director for Northern Europe and secretary general of the Swedish Defence Association. Follow her on Twitter @AnnwieAnna.