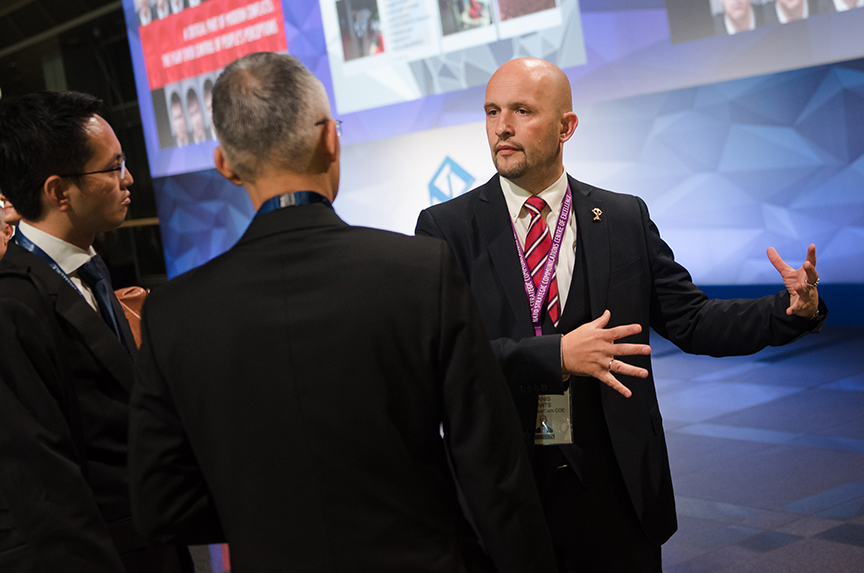 In the early 1980s, the KGB began spreading the conspiracy theory that the CIA was behind the AIDS epidemic.

There were several variations of the fabricated tale. The main one was that CIA experiments to create an incurable disease for use as a biological-warfare agent got out of hand. The result, according to the storyline, was that AIDS infected unsuspecting Haitians and Africans whom the CIA was testing it on—and the disease spread across the world.

It took a couple of years for this phony account to gain traction, giving scientists time to debunk it.

Thanks to the Internet, a conspiracy theory today can circle the globe in hours, picking up millions of believers, before it can be debunked.

The difference in the speed at which fake news is disseminated these days, and the fact that so many people accept it as true, are at the heart of a Latvia-based, NATO-accredited center for strategic communication.

Janis Sarts, once the Number 2 official in Latvia’s Defense Ministry, heads the NATO Strategic Communications Center of Excellence. It is one of twenty-five special-expertise NATO partner centers addressing issues ranging from terrorism to cold-weather warfare to energy security.

The decision to join a center is up to each NATO country. The NATO StratCom Center of Excellence has fourteen Alliance members, plus the non-NATO countries Sweden and Finland.

The center’s overarching goal is to identify disinformation trends, come up with ways to counter them, and share these approaches with NATO members, governments, academics, journalists and others. Unlike some disinformation centers, StratCom does not do daily fake-news monitoring and debunking, Sarts said. It reports on how disinformation evolves over time.

What became the NATO center started as a Latvian response to a torrent of Russian disinformation in 2012 on a referendum to make Russian Latvia’s second official language. The fake news included claims that the 40 percent of Latvians whose main language is Russian were second-class citizens, that Latvia had a worse economy after joining the European Union in 2004 than during Soviet times, and that the United States was dictating Latvia’s foreign policy, including its fractious relations with Russia.

Three-fourths of Latvians voted against the referendum. But the campaign contained so much fake news aimed at affecting Latvian policy that the country’s leaders realized disinformation had become a security threat.

“It was a turning point,” Sarts said. “It showed the magnitude of Russia’s hold on the information space in the country.”

Sarts left his position as the defense ministry’s state secretary to become the center’s second director in 2015.

At the time, NATO was doing a periodic review of its performance in Afghanistan. One conclusion was that the Alliance needed to develop better communications expertise. A key reason for the conclusion was that its efforts to win over the civilian population and counter the enemy’s cyber-propaganda were falling short.

“It didn’t have a concept of how to deal with today’s complex information environment—one where you need to communicate simultaneously with many audiences at the same time,” Sarts said. When NATO decided Latvia could help, “our national center quickly turned into a NATO Center of Excellence,” he said.

The mandate of the NATO Strategic Communications Center of Excellence is to research information warfare in general and warfare designed to affect behavior in particular, Sarts said. It uses its findings to devise strategies for countering the enemy’s disinformation tactics and to train military and civilian leaders in information-warfare skills.

Partly because of the center’s work, the four forward battle groups that NATO deployed to its eastern frontier in 2016 “were set up with the idea of what kind of communication effects NATO wanted to have, both in the areas it is protecting and in the ones it is deterring,” Sarts said. The forward deployment was a signal that NATO would not allow Russia to use against the Baltics and Poland the hybrid-war tactics it employed in 2014 to seize the Crimean Peninsula.

Canada leads the battle group in Latvia, Germany the one in Lithuania, Britain the group in Estonia, and the United States the one in Poland. In addition to soldiers from the lead and host countries, each group includes troops from a number of other NATO nations.

Although NATO’s StratCom Center of Excellence does not track all online information on specific subjects to identify fake news, it does focused monitoring to gather data, Sarts said.

As an example, “we’re monitoring the robotic networks in Twitter and other social media that talk about NATO in the Baltic States and Poland,” he said.

While the center normally focuses on disinformation trends, when it becomes aware of a specific fake-news story that poses a major threat, it is ready to alert the public to it.

An example was the Russian propaganda machine’s false story that migrants had gang-raped a 13-year-old ethnic Russian girl named Lisa in 2016. The tale riled Russians, ethnic Russians across Western Europe, and anti-migrant groups.

“We were the first to conclude, and publicly state, that the story was false and that Russia was using it to target German Chancellor Angela Merkel,” Sarts said.

The center makes about three-fourths of its reports on the changing disinformation environment available to the public. The rest go to NATO’s headquarters in Brussels, all twenty-nine individual Alliance members, and the center’s non-NATO members.

In addition, the center holds about twenty conferences, seminars, and other disinformation-trend proceedings a year. Some focus on particular areas, such as the Western Balkans or the Arctic, where Russia, Canada, the United States and China are jockeying for resources. The public can attend most of the proceedings or watch them live on the events’ Facebook page.

The scope of the NATO StratCom Center of Excellence broadened recently to include advising countries on ways to deal with election-related disinformation. A number of both NATO and non-NATO countries with elections that are coming up asked for the help, Sarts said. “There’s an understanding these days that preparing for elections also means preparing for potential hostile interference,” he said.

Sarts believes the ultimate defense against fake news will be to inoculate people against it.

Once a false story begins spreading, it’s too late, he said. It’s already having an impact—people are believing it.

“To prevent fake news from spreading, you need to be able to deduce from various signs what it will look like,” he said. Then you warn the public what’s coming. Once they are alerted, they are more likely to disregard it, he said.

Like vaccines against health threats, developing fake-news inoculations is likely to be challenging and take time. But in terms of safeguarding the overall health of a society, the payoff may be just as important.