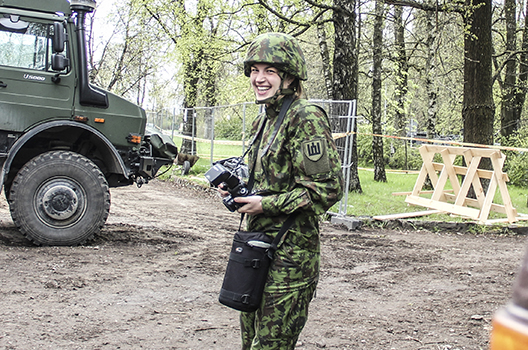 Sergeant Specialist Ieva Budzeikaite was less than two weeks into her award-winning career as a combat photographer when the Lithuanian Armed Forces gave her a chance to snap pictures of troops taking survival training.

“How cool is that!” she thought.

She had no clue that in the forested, swampy training grounds she would be running faster than she had in her life.

Her task was photographing a dog chasing a soldier trying to avoid enemy capture, the dog’s handlers, and the capture when the trackers caught up with the soldier.

Although Budzeikaite was in shape, it was all she could do to keep up with the fleet animals and their handlers. “Thank God I left my backpack behind,” she said with a laugh.

Although spent, she didn’t dare fall behind. Visibility was poor. If she got lost, she faced the embarrassment of the survival trainers having to call off the exercise to rescue her. So she kept running.

Finally she caught a break—and her breath. The dog lost the soldier’s scent, and the trainers decided to rest for awhile. Budzeikaite turned down their invitation to take pictures of  another round of the chase.

The tracking assignment showed why the 28-year-old loves her job so much.

“Every day is an education,” said Budzeikaite, who is in her second year of combat photography after four years as a Lithuanian Ministry of Defense photographer. Although all her assignments are interesting, she said, “patrol training and survival courses are my favorites.”

Making the job even more invigorating is interacting with “awesome military-journalist colleagues and the people I take photos of,” including soldiers from other NATO countries, she said. Some of her most cherished memories involve “sitting around a campfire and having a good time” after the work day ended, she said.

Budzeikaite became a photography enthusiast in high school. After majoring in Applied Photography at the Vilnius College of Design, she worked at the Fotodiena press photo agency. But she tired of the repetitive fare of “photos of celebrities at concerts, parties, various opening ceremonies and TV shows.”

So when the Ministry of Defense offered her a job, she didn’t hesitate. The native of Marijampolė  in southern Lithuania knew little about the military, so after a year at the ministry, she took a three-month basic training course. It hooked her on a military career.

Maj. Tomas Balkus, who heads the public affairs team of Lithuanian Armed Forces’ Defense Staff, said Budzeikaite has developed a reputation as someone who will go to any length to get great pictures. This includes wallowing in the mud, he said.

“I don’t mind the water, mud or grime—that’s what makes it interesting, and that’s what gives me the opportunity to get a better shot,” Budzeikaite said. “In fact, the more grime there is, the better picture I can take,” she said with a smile.

Weather can challenge a combat photographer, but if you’re smart, you can overcome it, she said. “If it’s cold, you have to keep on moving to keep yourself warm, and, of course, make sure you have some tea in your backpack. If it’s hot, make sure you drink a lot of water. I know that’s a cliché, but it’s true.”

A combat photographer also needs to stay fueled, she said. The quality of food in the field is no problem—“it’s those moments when you don’t have any,” she joked.

“It doesn’t matter what you’re eating, especially when you’re tired and very hungry,” she said. “Like my father used to tell me, ‘If the food isn’t good enough, you are not hungry enough.’”

Braving the elements for riveting pictures “is not always easy, I have to admit,” she said. “But when you look at the compelling photos you took, and the emotions you captured in them, all you can think of is, ‘Wow!’”

The breakthrough year for recognition of Budzeikaite’s work was 2016, when she won two Golden Shots in the Lithuanian Press Photography Awards competition. One of the firsts was for a photo of shaved-head, bewildered-looking recruits on a bus and the other for a photo essay of soldiers on patrol training.

In 2014, she won the National Equality and Diversity Photography Competition for pictures of members of different religious communities—Orthodox Christians, Jews, Muslim Tatars, and Hare Krishnas.

Budzeikaite has covered a number of NATO exercises. One was Iron Sword, which brings 4,000 troops to training grounds in Pabrade and Rukla, Lithuania. In addition to Lithuanian soldiers, the Iron Sword that she covered in 2016 included forces from the United States, Canada, the United Kingdom, Germany, Poland, Romania, Estonia, Latvia, Slovenia, and Luxembourg.

“They were doing urban warfare training, taking turns attacking and defending a site,” she said. “I spent two weeks photographing them and talking with them.”

The NATO troops worked well together toward their common goal of learning to fight better in cities, Budzeikaite said, but some of their differences intrigued her.

One contrast was that troops from some countries—the Netherlands, for example—were happy to have their pictures taken, while those from others were more reserved.

Some combat photographers can be very competitive, not wanting to share ideas and techniques with others, she said. But American photographers would shout to her to come to where they were shooting so she could get a better vantage point.

The bottom line on Iron Sword 2016 was that it was “an amazing opportunity for soldiers from a lot of countries to get together and work as a team,” Budzeikaite said, adding: “We like having NATO troops here because we can share their experience and knowledge.”

The German-led NATO battle group that is permanently assigned to Lithuania also includes troops from Norway, the Netherlands, Belgium, Croatia, and the Czech Republic.

Budzeikaite has yet to experience combat, although she has accompanied top military leaders on visits to Lithuanian troops in Afghanistan—the head of the armed forces, Lt. Gen. Arvydas Pocius, in 2014, and then-Defense Minister Juozas Olekas in 2015. Several dozen Lithuanians a year were stationed in Afghanistan as part of the NATO missions between 2002 and 2015—first International Security Assistance Force and then Resolute Support. A new batch was deployed there in 2018.

Although not a combat veteran, Budzeikaite got a feel for battle during a two-day course the Lithuanian military gives civilian journalists who may end up covering a hot spot.

The training included finding cover under fire, what to do when a grenade is tossed at you, conditions you’re likely to experience during captivity—including waterboarding—and learning to escape from handcuffs.

“The bombing-field part of the course was the scariest,” Budzeikaite said. “First there’s the anticipation of the incoming round, and then the actual explosion. It reverberates throughout your body.”

When soldiers receive live-round-response training they are usually ordered into a bunker before an explosion, she said. But the civilian journalists she was with “were given the chance to be outside and experience the blast from plastic explosives that were so close that they filled our hair and eyes with dirt,” she said.

After the explosion-acclimation training, the instructors told the journalists that, for their safety, there was nothing else they could show them.

Budzeikaite has proven many times that she is up for anything, but as in the case of running after the tracking dogs, one dose of the live-fire training suited her just fine.

“If you ask me, it was more than enough,” she said with a chuckle.