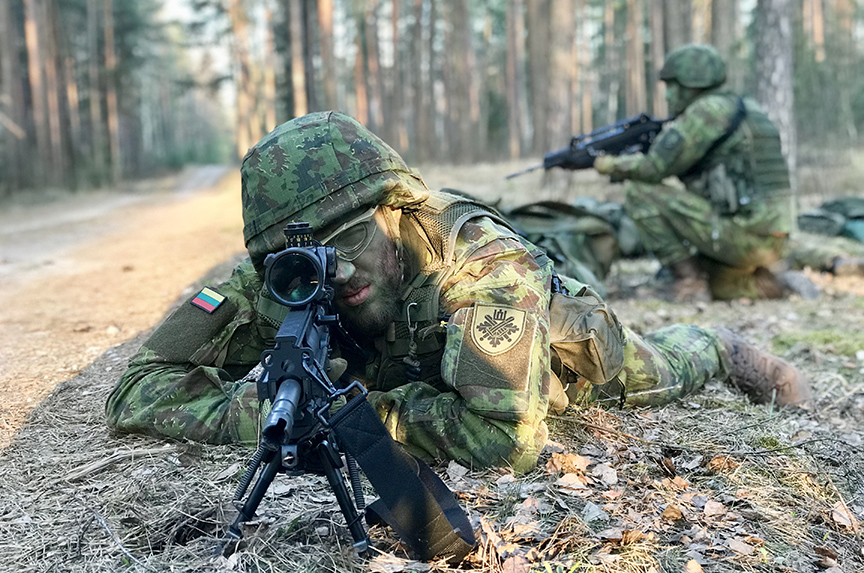 Lithuanians born after their country declared its independence from the Soviet Union on March 11, 1990, are often referred to as the “Freedom Generation.” Bužinskas is one of them.

In his fifth year of service in the Lithuanian National Guard, Bužinskas is a twenty-six-year-old masters student at Vilnius University, a politician by trait and education. While still in university he was elected to the Vilnius City Council, becoming one of the youngest delegates ever elected during the short history of independent Lithuania.

But there is another side of Bužinskas with which not every resident of Vilnius is familiar. Well known to the public for his wit and sometimes edgy sense of humor, Bužinskas finds himself wearing camouflage and a burgundy beret as often as grey suits.

Lithuanian National Guard Private First Class Adomas Bužinskas (right) and a friend pose in the Vilnius City Council. Bužinskas is one of the youngest delegates elected to the council. (Photo courtesy of Adomas Bužinskas)

The National Guard, an integral part of Lithuania’s armed forces, defends Lithuania’s borders and undertakes operations for which the country’s regular forces are not nimble enough. Burgundy berets and contrasting personal experiences are what distinguishes the National Guard from other units. The National Guard is a collection of soldiers from diverse backgrounds. “It is hard to find two soldiers from the same field,” Bužinskas said with a laugh. “We have IT guys, lawyers, businessmen, professors, you name it.”

All of the servicemen in this branch of Lithuania’s armed forces are volunteers. No one was forced to come and no one is forced to stay. Their motivation is awe-inspiring.

Varying age groups and backgrounds give the National Guard units an edge and a willingness to implement new innovations. “The National Guard just started using drones in our exercises because we have a bunch of IT guys who fly drones in their free time and agreed to bring them to their units,” said Bužinskas. “Now everybody knows that we have them, but the first time we used them it caused some commotion.”

“We are often tasked to be the OPFOR [a military term for a combat unit tasked with representing an enemy for training purposes] for different units and the first few times our guys used drones against them, they were caught with their pants down,” Bužinskas recalled with a chuckle.

Innovation does not stop at drones. Bužinskas’ unit regularly trains on motorbikes and quadbikes—part of a recent National Guard initiative to make the small units even more mobile. The tactic, perfected by the Lithuanian Special Operation Forces (SOF) in Afghanistan, is now being passed on to other less conventional units, giving them unparalleled mobility through thick Lithuanian forests.

Although soldiers are not able to fight while riding quadbikes and motorcycles, they have the ability to quickly change course and prepare ambushes in locations where enemy armored vehicles are unable to pass.

“I don’t want to brag, but our National Guard unit is becoming more and more similar to SOF,” said Bužinskas. “It makes sense. They operate in small units and so do we. They work behind the enemy lines, which is also our prerogative.”

After completing a variety of courses, starting with heavy weaponry and ending with explosives, Bužinskas is currently well suited for unconventional warfare. The Lithuanian military has, since the country’s independence, been training for partisan, underground resistance against overwhelming numbers because in the event of war, Lithuania would likely be challenged by bigger and stronger countries.

Lithuania’s NATO membership serves as the main guarantor that in the event of conflict Lithuania will not stand alone. The Lithuanian National Guard has participated in international NATO exercises. Bužinskas values the importance of allies. Training together with NATO troops from different member states has been the most demanding and rewarding  experience, he said.

I asked Bužinskas what his typical day in the “office” looks like.

“I am not sure there is such thing as ‘typical’ in our service,” he replied. “As we are not the regular army, we work twice as hard to be as effective during the exercise.”

“I had a feeling you would say that, but doesn’t it get to you sometimes?” I pressed.

“Some days I start at the shooting range, then we train how to move quickly through the forest with bikes and go for a jog together with the guys. What is there not to love?” he responded half-jokingly.