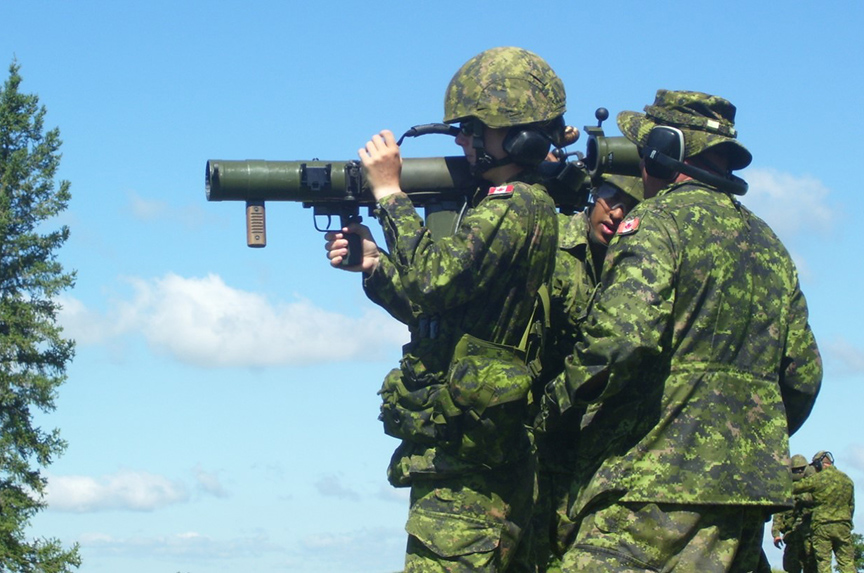 The Canadian Armed Forces (CAF) was one of the first militaries in the world to open all of its positions, including combat roles, to women. Introducing women into the combat arms in 1989 increased the recruiting pool by about 100 percent.

The combat arms are the four combat-focused branches of the Canadian Army: armor, artillery, infantry, and engineering. Each now has a small but powerful contingent of women, including artillery officer Maj. Melissa Marshall.

Immediately after graduating from St. Thomas University in 2007 with a political science degree, Marshall enlisted. She completed artillery officer training the next year and was posted to the Canadian Artillery School in Gagetown, New Brunswick. It was there, on the large military base in the small maritime province, that Marshall received her Forward Observation Officer qualification. Thereafter she could work within a combat team, advising in offensive and defensive maneuvers to ensure safe and tactical firing of artillery.

In a field that’s less than 10 percent female, old misconceptions can make work challenging for a woman. Marshall said they inspired her to go the extra mile to “prove” herself physically. She began weight training and became passionate about fitness, exercise, and nutrition.

“I am constantly pushing myself to be stronger, to be faster, and to be better,” she explained. “Fitness teaches me to focus my mind and push myself well beyond perceived limitations.”

Marshall continues pushing her body to extremes, from breaking trail through waist-high snow while carrying a 150-pound rucksack to completing the 26-mile Bataan Memorial Death March across New Mexico’s White Sands Missile Range. You have to be physically fit to accomplish these feats, but Marshall believes mental resilience is equally important. Strategies like positive self-talk, setting specific goals for each workout, and focusing on how amazing the human body is when properly fueled and trained have helped propel her over any hurdle in her path.

“As long as your heart and mind are always a part of the journey, your body will follow suit,” she said.

In 2013, Marshall deployed on Operation ATTENTION Rotation 3 in Kabul. This was the CAF contribution to the NATO Training Mission–Afghanistan (NTM-A), which delivered training and professional development to the national security forces of Afghanistan.

As Task Force adjutant she coordinated administration, and she provided administrative and disciplinary advice to the commanding officer of the National Command Support Element, the command-and-control center for CAF members in Afghanistan. This element was a hub for security, mentoring sessions between Canadian and Afghan soldiers and police forces, and governance efforts in Kabul. One day she would be advising the commanding officer when misbehaving soldiers were brought to a summary trial; the next day she’d be the master of ceremonies for an American-led September 11th memorial parade; and the day after that she was conducting live fire ranges with Canadian Special Operations Forces members mentoring their Afghan counterparts.

The best part, Marshall said, was interacting with Afghan civilians. NTM-A forces were there to lend support and security to the Afghans, and meeting with locals let soldiers get to know the people who most benefit from improved stability. Regular contact also allowed citizens to maintain friendly relations with the military personnel.

Camp Phoenix, the NATO military base where Marshall worked, held a monthly market set up by Afghan women and children. Over the course of her nearly seven-month tour her “desire changed from wanting to buy scarves to giving something back to them, even if it was little.”

Marshall began collecting some of the bulk items that came in from overseas, including shampoo, deodorant, and toothpaste. She also started taking snacks from the dining hall to give to the children.

“One day I asked a woman if I could give her daughter a Popsicle. She said yes, hugged me, and cried. She didn’t speak English but her daughter translated that she was emotional because she would have never been able to give her daughter something like that,” said Marshall.

Marshall didn’t really sleep that night. “I found it incredibly sad to think that there were children in the world who would never be able to enjoy something as simple as a Popsicle on a warm day,” she said. “That always stood out to me, because you never actually realize how good your life is until you see what life is like ‘on the other side.’”

Afghan women held a market every month at Camp Phoenix, the NATO military base where Maj. Melissa Marshall worked during her deployment to Afghanistan in 2013. These events provided the opportunity for military personnel to interact with civilian women and children and gain a deeper appreciation for the important security and stability work they were doing. In this photograph, Marshall poses with two Afghan children. (Photo courtesy of Maj. Melissa Marshall)

From HQ back to the field

Marshall has been the executive assistant to the Commander of 3rd Canadian Division since 2017. The role, vital to day-to-day command group operations, has largely kept her from the field for the past two years. But this year she’s been posted to Manitoba to take over as a battery commander, in charge of the functioning of the artillery group, at Canadian Forces Base Shilo. Starting in August 2019 she’ll handle everything from discipline and administration to ensuring that the soldiers are prepared for deployments. This summer 3rd Canadian Division will be in the high-readiness phase, poised to deploy in Europe, in the Middle East, and domestically.

Marshall will be one of two female battery commanders in Canada, and she says she’s humbled by the opportunity to set an example of leadership that soldiers can emulate.

“Whether it’s in terms of their physical or mental resilience, I want to show the people I’m responsible for that I absolutely want to be a part of their lives,” she said. “I will celebrate their achievements and also support them through hardships.”

Ashley Materi is a public affairs officer for the Canadian Department of National Defence and recently finished an internship with the Public Diplomacy Division at NATO. Follow her on Twitter @Ash_Materi.