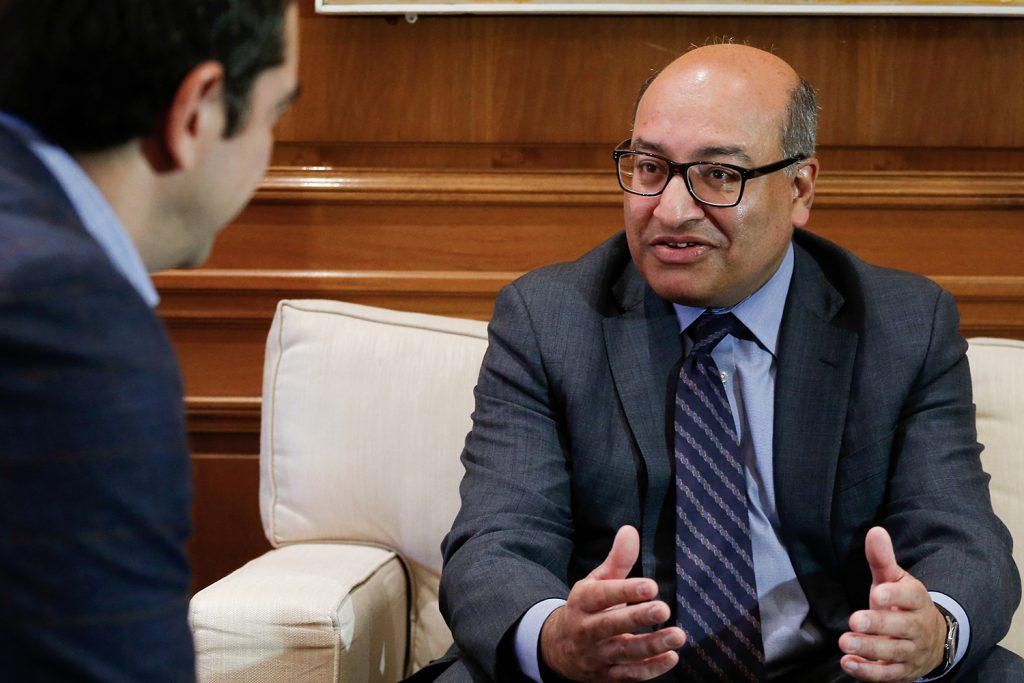 On April 23, the bank’s shareholders approved a comprehensive series of response and recovery measures worth €21 billion over the next two years.

Collectively known as the “solidarity package,” its key pillar is a resilience framework to provide finance to meet the short-term liquidity and working capital needs of existing clients in the thirty-eight European, Central Asian, and North African nations where it invests.

Sir Suma Chakrabarti, who is stepping down in July after heading the EBRD since 2012, spoke May 27 with Ryan Heath, author of Politico’s Global Transitions newsletter. The Zoom chat was sponsored by the Atlantic Council’s Global Business & Economics Program.

The Indian-born civil servant said the EBRD is adapting and scaling up existing instruments while developing new initiatives to help stave off the immediate threat of the coronavirus, which has already infected 5.6 million people and killed at least 350,000 around the world.

The EBRD said it’s also helping prepare its beneficiary countries for the post-coronavirus era and safeguard their progress toward sustainable, fair, and open market economies.

“If you go back five years to the Addis conference, we had to get more private-sector finance into the system,” Chakrabarti said, referring to the Financing for Development meeting of multilateral development banks held in July 2015 in Addis Ababa, the Ethiopian capital.

“Then along comes COVID-19, and whatever numbers we had before, we have to redo. The amount of financing now required is much greater,” he said. “I personally think we need to go back to the drawing board and take a fresh look at the quantity of financing we need. I would call for a new Addis to actually think about the amounts, and that requires strong leadership from the richer nations to come up with a plan.”

In fact, said Chakrabarti, the €21 billion package is “a sort of down payment—not the end of the story.”

“A lot of this money is going to have to come from private financiers,” he suggested. “We’ve got to tap into sovereign wealth funds and pension funds to get the leverage and the multiplier effect we need into the system. We will have to revisit the Addis agreement very soon.”

Chakrabarti said he’s not worried about fraud or money laundering as it relates to the current COVID-19 crisis.

“We have extremely strong internal controls on compliance and integrity, so that hasn’t been an issue,” he said. “A much bigger issue is disbursement. It’s all very well for multinational banks like mine to approve these sums and then have nice ceremonies. But what really matters is the money reaching the client. In the private sector, we tend to do very well, but with sovereign clients it’s much more sticky. They quite often involve policy reform, and that tends to slow down the whole program. We can’t sit around waiting for disbursements. We’ve got to get the money into these economies.”

“Right now, we’re going through sort of an inward-looking period, and this COVID-19 crisis has exacerbated these tendencies. The US-China trade dispute has also taken up a lot of bandwidth. That makes some of what I said more difficult to achieve. I hope I’m not whistling into the wind, but it will require new leaders to come to the fore,” he said, praising French President Emmanuel Macron and the prime minister of New Zealand, Jacinda Ardern.

“My worry is that some of those people who may feel let down by globalization are much more negatively affected by the COVID-19 crisis—particularly the gains that have been made in access to finance, women in the labor force, and youth unemployment,” he said. “The risk is that in a crisis like this one, many of these groups will actually be put in the back of the queue. It is absolutely important that leaders speak up.”

Chakrabarti took pains not to directly criticize the Trump administration when Heath asked if Washington’s “withdrawal of leadership” in fighting the COVID-19 pandemic troubled him.

“I would encourage the United States to develop a set of issues which it cares about,” the bank chief responded. “When I think of all the big initiatives I’ve seen in my career, the US has always been at the center of it. US support was fundamental in Ukraine and our work in the Middle East. I would love to see it get back in that mood of wanting to have a positive agenda for the multilateral system.”

Pressed as to whether the United States was undermining EBRD efforts in the developing world, Chakrabarti said “no, but it’s not speaking up as much as it used to. There are many people in Congress who I admire across parties. I just think that voice is a little stilled at the moment.”

In recent years, the bank president said, his institution has been “extremely successful” in North Africa, tapping into opportunities in Morocco, Tunisia, and Egypt. Of particular significance, he said, is the EBRD-funded Benban solar park in Egypt—a thirty-megawatt plant that when fully operational will generate clean, renewable energy for North Africa’s most populous country.

To date, the EBRD has invested over €4.7 billion in ninety-two projects in Egypt since it began investing there in 2012.

“I fully expect that within the next eighteen months we’ll be investing in Algeria as well,” he said. “Egypt has been our largest market for two years now. It’s also the region which has been championing further expansion of the EBRD into sub-Saharan Africa. Many Moroccan companies want to invest there. They know EBRD well, and they’d like to take that same magic further south.”

Chakrabarti stressed the need to refocus on Africa, given that the COVID-19 pandemic is likely to spark the first continent-wide recession in twenty-five years—with up to a third of Africa’s workforce poised to lose their jobs.

This year, the EBRD projects a global economic downturn of 6.5%—a sharp contrast from the 3 percent growth had been predicting before coronavirus became a household word. For 2021, the bank expects to see 4.8% growth. Yet that growth will be uneven, with a very sharp recovery likely in the western Balkans provided tourism rebounds quickly.

Chakrabarti said he supports extending EU membership to various Balkan nations as a way of galvanizing reform. He specifically praised the EU’s decision in March to open accession talks with Albania and North Macedonia, and said he hopes the Serbia-Kosovo issue will be resolved “so that those two countries can move forward as well.”

Moving to Central Asia, Chakrabarti lauded President Shavkat Mirziyoyev of Uzbekistan, who assumed leadership of his country in September 2016 following the death of its hardline autocratic ruler, Islam Karimov.

“What’s happening in Uzbekistan is quite striking,” he said. “In just over three years, its president has really transformed the landscape, both politically and economically. We’ve already made over €1 billion in investments. I would really look at that market.”

Heath noted that not all countries receiving EBRD help are really democracies—despite the bank’s original mandate, when it was established in 1991, of supporting democratic reform in Eastern Europe and the former Soviet Union.

“Yes, we were set up to invest in countries that are making progress toward multiparty democracy and pluralism,” Chakrabarti conceded. “It’s clearly been an uneven ride. No one is going to pretend otherwise. I insisted we have an honest, grown-up debate about this.”

He added: “We no longer go around saying every country is doing fine. But if you take the long-term view—as is the case with Kazakhstan and Uzbekistan—the changes in recent years have been positive. It’s unfortunate that we tend not to talk about those positive changes.”