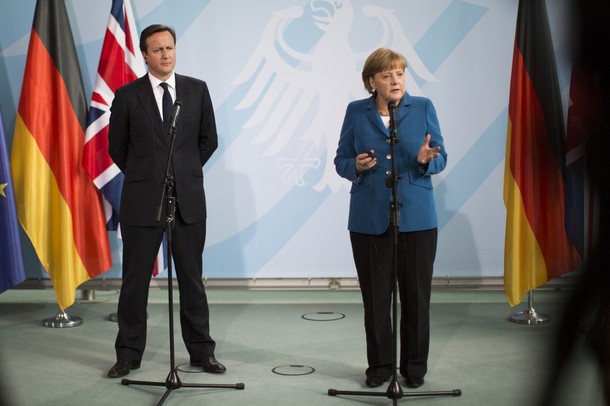 Those of you of a certain vintage will remember those flinty, somewhat silly British war movies of the 1950s. The story line was always roughly the same; a plucky British soldier, invariably called Tommy, armed only with a broken toothbrush, elastic band and a piece of chewing gum would, after suffering much adversity, defeat an entire Wehrmacht division.

At some point in the storyline Tommy would invariably and temporarily be captured by some cartoon-cutout German who would invariably utter the immortal line, “Vor you Tommy ze var ist Ofer”. As we descend into the Euro abyss reading the German Kommentariat I am tempted to say some are at it again. Britain, the line goes, has no alternative but to accept the German view of Europe, so why can the silly British not see it?

Part of it is understandable frustration that in the midst of the Eurozone crisis the age-old issue of Britain and Europe has again come to the fore. Equally, in spite of my huge respect for modern Germany the Kommentariat also reflect a German tendency to believe that what is good for Germany is good for Europe. Thus, to the Kommentariat pursuit of the German national interest is known as ‘European integration’, pursuit of the British national interest ‘blackmail’.

Poor little Britain, the line goes, is lost in a long-dead past, and wallowing in misplaced schadenfraude at the travails of the Eurozone. However, soon broke Britain will break up and have no alternative but to accept the German idea of ‘Europe’. The more sophisticated members of the Kommentariat recognise that such views are rather silly but worry that moves towards political union could see Britain step inexorably towards an EU exit. This could do immeasurable damage, not least to Germany’s leadership of Europe. The less sophisticated simply try to shame the British into acquiescence suggesting the country with the world’s fifth or sixth largest real economy and one of the most capable armed forces has no alternative but to abandon national sovereignty in the name of ‘Europe’. Some even suggest that Britain is responsible for the Eurozone crisis for not having joined the Euro!

The Kommentariat reflect a basic political division between the two countries. The German view of ‘Europe’ is a potent mix of romanticism and realism, whilst the British view (as much as there is one) is entirely pragmatic. Moreover, whilst the rest of Europe by and large accept the German model of Europe, mainly to get their hands on German taxpayer’s money, the British steadfastly refuse.

For the British ‘Europe’ simply costs too much and could soon cost a lot more. Britain ‘enjoys’ a huge trade deficit with the rest of the EU, and transfers £4 ($6) to the rest of Europe for every £1 ($1.5) it gets back. Indeed, the only year Britain enjoyed a net benefit was 1977, at the time of the last in-out British referendum – now there’s a surprise.

The British, or to be more precise the City of London, also provide a convenient scapegoat for the Kommentariat to avoid a simple truth; the problem is the Euro itself. By extension London must not only be tamed but the British made to pay for a crisis not of their making if the German taxpayer is to be protected.

However, the ultimate silliness of the Kommentariat is to pretend Britain has no alternative. It is simply madness to think that a country the size, capability and creativity of Britain could not make its own way in the world. If the Kommentariat wants proof of that look no further than the London Olympics. The Games demonstrate again something the Kommentariat really should have learnt by now; that the British when galvanised can be world-beaters. If only Britain’s defeatist elite could see what the British people instinctively see. Indeed, if there is a dangerous British malaise it is the void between Britain’s vacuous leaders and its people.

However, the Kommentariat is right about one thing; Europeans must work together at this most dangerous of moments. Certainly, Britain must do nothing to make this crisis worse than it already is. It is a shame then that silly talk of political union so blights effective, pragmatic crisis management. Over time London and Berlin need a new start but the perpetual belittling of Britain by the Kommentariat makes that hard.

There is nothing that irritates the Kommentariat more than British commentators using World War Two as a political metaphor – so here goes. During the September 1944 Battle of Arnhem surrounded and vastly out-numbered British paratroopers were offered surrender terms by the Germans. “I am awfully sorry, old chap”, came the reply. “We simply haven’t the room to take you all. Is there anything else?”

Julian Lindley-French is Eisenhower Professor of Defence Strategy at the Netherlands Defence Academy, Fellow of Respublica in London, Associate Fellow of the Austrian Institute for European and Security Studies and a member of the Strategic Advisory Group of the Atlantic Council. He is also a member of the Academic Advisory Board of the NATO Defence College in Rome. This essay first appeared on his personal blog, Lindley-French’s Blog Blast. Photo Credit: Getty Images