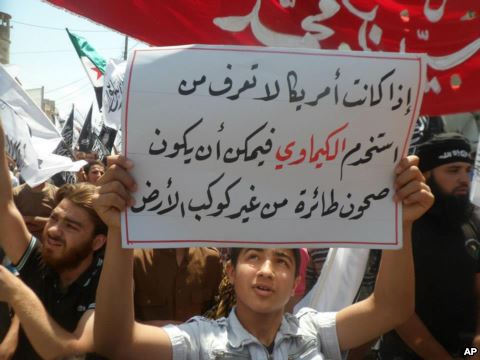 However, the situation in Syria threatens to make a mockery of the administration’s public posture, which would likely have serious and deleterious consequences when it comes to administration commitments on a host of national security issues and challenges.

The problem the president faces is that there are no good options with which to respond to a “game changing” act on the part of the Assad regime. The administration may talk tough when it comes to Syria, but backing that talk with action will be a very complicated process, to say the least.

There are calls for the administration to send arms to the Syrian opposition, but aiding the Free Syrian Army comes with a significant set of risks. There are allegations that armed opposition groups in Syria have engaged in significant human rights abuses, and offering aid to those groups might inadvertently benefit Islamists who are hostile to the United States and to American interests. Indeed, at least one UN official believes that anti-regime forces have used chemical weapons. The United States should not be eager to jump into bed with the Syrian opposition by giving arms and aid to religious fanatics and egregious violators of the laws of warfare.

Some maintain that the administration and willing allies should create a no-fly zone and a safe haven for the Syrian opposition groups—an approach that presumably will keep the United States out of the fighting even as it helps alleviate the unfolding humanitarian disaster in Syria. Unfortunately, creating a no-fly zone is an involved process. It requires having the United States establish air supremacy over Syria and knocking out Syrian anti-aircraft installations—an act of war, in short. The creation and maintenance of safe havens may well require a further act of war—the presence of American troops and materiel on the ground in Syria. As such, the administration should only commit to these steps if it is willing to contemplate the very real possibility of  being drawn into expanded military action. The fact that the administration has not explained what its military goals or its exit strategy might serve as an indication that it does not have good answers to these questions. This lack of vision will make it very difficult to get the American public behind any military action, let alone carrying out that action successfully.

Prospects for creating an international coalition against Syria are also poor. Neither China nor Russia is likely to authorize action through the Security Council, since they want to balance against the projection of American power in the Middle East. Even if they were willing to stand aside as they did in Libya, harsh American rhetoric about the Chinese and Russians may have ruined the chances for cooperative diplomacy, as Zbigniew Brzezinski has pointed out. As such, barring extraordinary events, it may well be too much of a challenge for the United States to further turn international opinion against the Syrian regime.

The tough spot the Obama administration finds itself in has ramifications that extend beyond the situation in Syria. Iran and North Korea are looking carefully to see whether the United States is willing to keep the commitments that it has made regarding Syria. If the administration backs off those commitments in such a way as to undermine its own credibility, those governments will be further encouraged to disregard American threats.

Despite the possible crossing of a red line via the use of chemical weapons, the Obama administration is probably not any closer to backing up its tough talk on Syria with action. A failure on the part of the administration not to carry out its threats will bring about a diminishment of American credibility. Damascus will likely be emboldened by any American failure to supplement words with deeds. Pyongyang and Tehran will be emboldened as well.