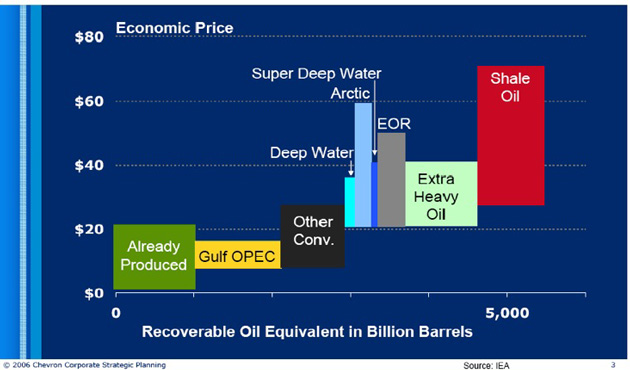 When oil ministers from the Organization of the Petroleum Exporting Countries (OPEC) meet in Vienna on June 5, they’ll face a strategic dilemma. Political instability in the Middle East and North Africa (MENA) is discouraging capital investment in local oil and gas projects, and shifting interest to North American shale—despite MENA’s cheap, abundant and easy-to-extract hydrocarbon resources (see graphs below). Although the current oil slump has hurt investment worldwide, the recovery period appears to favor investment in North America, the Caspian, and Africa at OPEC’s expense.

When it comes to new oil and gas projects, rule of law and political stability are more attractive than vast, cheap reserves. The main barrier to Middle East exploration and production is political risk mismanagement. Other regions have developed economic unions and dispute-mitigating organizations such as the European Union, the Organization for Security and Co-operation in Europe (OSCE), NATO, and the Association of Southeast Asian Nations (ASEAN). Yet internal rivalries have overwhelmed the Arab League, and the Organization of Islamic Conference (OIC) has no dispute-resolution or peacekeeping functions.

Iraq is on the verge of collapse. In northern Iraq, the Kurdish autonomous government battles the Islamic State of Iraq and al-Sham (ISIS). Meanwhile, the Shia-dominated government in Baghdad plans to invest $500 billion in its energy sector by 2030, but this looks unrealistic as long as war rages throughout the country. Iraq is not likely to defeat ISIS without foreign help, and Western leaders are reluctant to send troops to Iraq.

Iran, meanwhile, boasts a strong Islamic nation-state, but luring investors to its energy sector won’t be easy. UN sanctions may not be lifted instantly. Iran’s support for Syrian President Bashar Assad, Hezbollah terrorists in Lebanon, and Houthi rebels in Yemen has triggered a clash with Sunni Arabs. Murky oil trusts controlled by corrupt clerics do not make good business partners—not even for Chinese state-owned companies.

Libya’s proven oil reserves are the largest in Africa, yet production has fallen from 1.7 million barrels a day when Moammar Gadhafi was in power to 600,000 b/d now. The Islamist General National Congress in Tripoli, backed by Qatar and Turkey, and the internationally recognized government in Baida, supported by Egypt, are unlikely to reconcile. Even so, investors hope the chaos inflicted by a failed Western intervention will end.

In Syria, Assad’s regime faces a devastated economy and has no choice but to buy black-market oil from ISIS. The situation is so bad there that no economic data for 2014 is available, forcing experts to rely only on estimates.

According to a report in Oil & Gas Journal, total E&P spending for new projects in the $55-60/bbl price range could fall by more than 20 percent in 2015. The annual survey of the E&P capex budgets of 476 energy firms  suggests that oil investment in MENA will fall even more deeply than the world average, due to political risk.

As regional turmoil continues, many analysts believe oil prices will go up, based on demand in the developing world. The conflicts increase uncertainty, hurting the region’s production capability. Oil and gas companies with Middle East exposure will obviously be adversely affected, leading them to switch to more stable regions.

Analysts say the large expected revenues don’t mitigate the risk linked to investing in war zones, even though such countries don’t represent the whole region. For example, Saudi Arabia, Qatar, and the United Arab Emirates all serve as foreign investment magnets. However, the data tells us otherwise. From 2002 to 2008, foreign investment in MENA energy skyrocketed, mostly due to the unprecedented rise of oil prices, which peaked in July 2008 at $145/bbl.

Now, though, the amount of regional FDI is falling after a brief rise in 2011 that was disrupted by the global economic crisis, the Arab Spring, and the ensuing wars, according to the World Bank. The emergence of ISIS also worsened the situation in Iraq, which was already unstable.

While investment in Iraq and Iran decreased, oil production rose, thanks to earlier investments. Even so, the decline in FDI will affect medium and long-term output. According to the World Energy Investment Outlook published by the International Energy Agency:

Meeting long-term oil demand growth will depend increasingly on the Middle East, once the current rise in non-OPEC supply starts to run out of steam in the 2020s. Yet, there is a risk that Middle East investment fails to pick up in time to avert a shortfall in supply, because of an uncertain investment climate in some countries and the priority often given to spending in other areas. The result would be tighter and more volatile oil markets.

While the Middle East will remain the world’s largest oil-producing region, “its share of global supply is expected to fall from 32 percent to 28 percent over the course of the next few years,” reports BP’s Energy Outlook 2035. However, the major reason for this decline is growing domestic demand for oil, meaning that instead of being exported, more and more Middle East oil is likely to be consumed at home.

Essentially, both Outlooks suggest that MENA will lose substantial FDI in the short term, though it is also likely to regain FDI in the long term due to growing domestic demand. Significantly, the reports’ authors do not consider security issues, even though investors must take political risk into account.

To protect their investments, oil companies and consumer nations will likely pressure Middle Eastern regimes to control their extremists. Otherwise, the bulk of investments will go to OECD producers, Africa, Brazil, the Caspian, and the non-Russian Arctic.

For now, some MENA regions don’t look promising. Libya will lose FDI, while the outlook in Syria and Iraq is grim.

The motto of the next decade of energy investments might well come from Samir Kayande, an ITG Investment analyst: “It’s not size that matters. The companies that win are the ones that can deploy capital competitively.” Following this logic, small-scale operators like independent US shale drillers will shape the global oil market.

Even OPEC admits it. In a report issued in late May, the cartel noted that “generally speaking, for non-OPEC fields already in production, even a severe low price environment will not result in production cuts, since high-cost producers will always seek to cover a part of their operating costs.” Indeed, the future for US and Canadian oil producers looks bright.