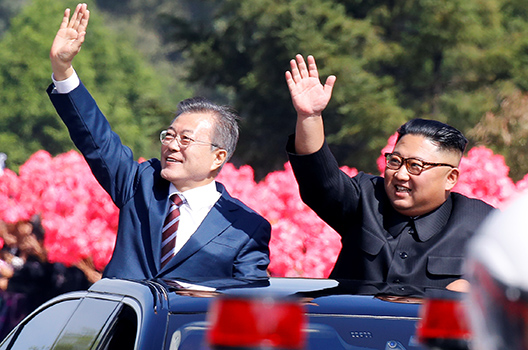 Kim’s pledge came in a meeting with South Korean President Moon Jae-in Pyongyang on September 19. At a joint news conference, Kim said he and Moon had “made a firm commitment to exert active efforts to make the Korean Peninsula free of nuclear weapons and nuclear threat and turn it into a land of peace.” Kim also said he would soon be making a trip to Seoul.

US Secretary of State Mike Pompeo said that the Trump administration is ready to “engage immediately in negotiations to transform US-DPRK relations.” North Korea is formally known as the Democratic People’s Republic of Korea.

Pompeo said the goal of this engagement would be to complete North Korea’s denuclearization by January 2021, a date set by Kim earlier this month.

Toward this end, Pompeo has invited North Korean Foreign Minister Ri Yong Ho to a meeting in New York next week. North Korean representatives have also been invited to meet US Special Representative for North Korea, Stephen Biegun, in Vienna, Austria, “at the earliest opportunity,” Pompeo said.

Robert A. Manning, a resident senior fellow in the Atlantic Council’s Scowcroft Center for Strategy and Security, discussed the latest developments and what Kim wants from the United States. Here’s what he had to say:

Q: What is your assessment of the latest developments on the Korean Peninsula?

Manning: North Korea has announced carefully calibrated steps and potential additional steps, which are modestly helpful, but fall short of what is needed. However, based on Secretary Pompeo’s statement and announcement of US-DPRK meetings at the United Nations and in Vienna, the denuclearization language in the North-South joint statement appears to offer an opening to explore initiating a US-DPRK negotiating framework.

Kim’s declaration [on September 19] carefully avoided the most important first step on denuclearization: Kim providing a full inventory of his nuclear weapons program to the International Atomic Energy Agency [IAEA] and allowing it to set up an inspection and monitoring regime—with challenge inspection rights for suspect sites.

Pyongyang has consistently shied away from this fundamental step, which, if taken, would be a sign of its seriousness with regard to denuclearization.

Q: What is Kim’s strategy?

Manning: Until now, North Korean tactics and strategy have been more consistent with efforts to create a situation where the world accepts a freeze, not dismantlement, with sanctions lifted and North Korea, like Pakistan, treated as a normal nation. With the Pompeo-Ri meeting in New York and if Special Envoy Biegun meets with North Korean counterparts in Vienna [where the IAEA is based], the North-South summit may have catalyzed a new phase of nuclear diplomacy.

Kim appears to be pursuing a strategy designed to do two things: first, give the Moon administration enough of an appearance of progress on nuclear issues to justify moving ahead on North-South cooperation and, by doing so, drive a wedge between the United States and South Korea. And, second, eventually get the United States, China, and South Korea to accept a nuclear freeze and accept North Korea as a de facto nuclear weapons state. Kim agreeing to dismantle ICBM [intercontinental ballistic missile] facilities also may be an effort to divide the United States from South Korea and Japan by ending US fears of an ICBM strike on the US mainland, while North Korea retains shorter-range missiles capable of hitting US allies.

So far, it looks like the North Korean tactics and strategy are more consistent with efforts to create a situation where the world accepts a freeze, not dismantlement, with sanctions lifted and North Korea, like Pakistan, treated as a normal nation.

Q: What does Kim mean when he says he wants the United States to take “corresponding measures”?

Manning: The United States has indicated a willingness  to explore an end-of-war declaration in return for North Korean action on denuclearization. The United States is looking at the North-South summit for signals that Kim is prepared to seriously negotiate. But so far, Pyongyang has not been willing to take that step. Kim is instead offering steps that are low-cost to him and then seeking major concessions in return. Until he clearly defines what his nuclear weapons program consists of by giving an inventory to the IAEA, this is mainly gamesmanship.

I will say that Kim deserves an Oscar for Best Director—the parade welcoming Moon and the event at May Day Stadium with 150,000 chanting for reunification was quite impressive. He may be rivalling President Trump as a Great Showman.

There needs to be an ongoing negotiations framework that can, as the North has insisted, be a phased process with concrete nuclear dismantlement steps met by concrete benefits: peace treaty talks, planning economic investment/infrastructure etc. Peace treaty/peace regime talks involving the United States, China, South Korea, and North Korea could proceed in parallel with concrete steps by Pyongyang toward dismantling its nuclear weapons.