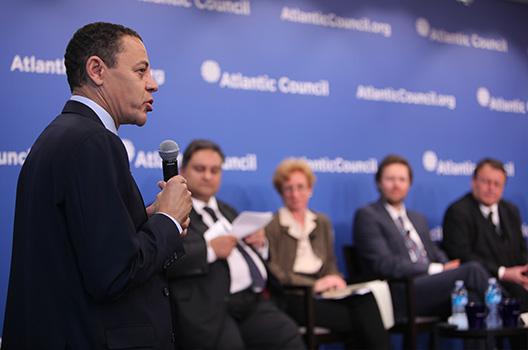 When it comes to the transatlantic digital marketplace, confluence is key, panelists agreed at the Atlantic Council on May 17.

The United States and the European Union must work together in a “holistic manner” to promote innovation and protect privacy, said David O’Sullivan, the EU’s ambassador to the United States.

In his remarks, Kennard examined five broad areas of the report, focused on building a new architecture for the digital economy: launch a US-EU digital council; use Transatlantic Trade and Investment Partnership (TTIP) negotiations to reduce digital barriers and broaden digitization in transatlantic and global trade; rethink the building blocks of US-European ICT regulatory cooperation; reinforce transatlantic data protection and privacy; and reinforce the multistakeholder model to Internet governance, both globally and at home.

The Digital Single Market (DSM) seeks to ensure the free movement of people, services, and capital. The European Commission has identified completion of the DSM as one of its ten political priorities.

“The US and Europe are at the forefront of the fourth industrial revolution,” said Bruce Andrews, US Deputy Secretary of Commerce. And while this leading role means greater innovation for both Europe and the United States, the way forward will require even more coordination, he added.

O’Sullivan said the “building of bridges between [the United States and the EU] requires both of us to converge our regulation or to find pipelines between our distinct sets of regulation.”

Andrews echoed this need for “pipelines.”

“Cross-border data flows are the central nervous system of the transatlantic digital commerce,” he said.

“There’s so much going on, on both sides of the Atlantic, we’ve got to be talking together in a really holistic manner,” he added.

In the wake of the terrorist attacks in Paris, Brussels, and San Bernardino over the past year, Jan Philipp Albrecht, vice-chair of the Committee on Civil Liberties, Justice, and Home Affairs in the European Parliament, sought greater coordination and cooperation on intelligence sharing. “On intelligence, [the EU] has no common laws at all, so maybe that hampers security more. I would say that common data protection and privacy provisions can sometimes even be helpful to allow for better information sharing and therefore better security,” he said.

US and EU officials are currently negotiating TTIP, a transatlantic trade deal that is seen as critical to improving existing standards on issues such as public health, environmental regulations, and labor and safety issues. Panelists said TTIP could ease regulatory issues.

“I think just in the same way that [the Trans-Pacific Partnership] is helping to rewrite the trade rules in Asia, we want to use TTIP. We want to use the opportunities we have to look at the economies of the future,” said Andrews.

“Our digital chapter could be much more ambitious than just data flows,” said O’Sullivan referring to the impact of TTIP. “I hope that through TTIP, but also through independent cooperation in the digital space, we can try to avoid, to the maximum extent possible, creating discontinuities between our regulatory systems.”

O’Sullivan struck a cautious note. “The fact remains, the EU is a single jurisdiction and it’s about creating a legal framework within that jurisdiction…it should not be implied that somehow our Digital Single Market has to be an extension of your jurisdiction,” he said.

“The US and Europe are at the forefront of the fourth industrial revolution,” said Bruce Andrews, US Deputy Secretary of Commerce. (Atlantic Council/Victoria Langton)

On harbors and ships

When it comes to Safe Harbor—an agreement that has been in place since 2000 and allows the transfer of European citizens’ personal data from EU to the United States—Kennard explained that it was seen at first as a “stopgap measure.” Yet today, almost twenty years later, we are “still relying on this important mechanism” in the digital economy, he added. In October of 2015, the EU’s top court deemed the Safe Harbor agreement invalid because it allowed US authorities routine access to Europeans’ online activities.

The EU-US Privacy Shield, agreed to on February 2, “reflects the requirements set out by the European Court of Justice” in its Safe Harbor ruling, according to the European Commission.

The Commission said the Privacy Shield would provide “stronger obligations on companies in the US to protect the personal data of Europeans and stronger monitoring and enforcement by the US Department of Commerce and Federal Trade Commission (FTC), including through increased cooperation with European Data Protection Authorities.”

The panel at the Atlantic Council wrestled with how to move away from “stopgap measures” to more sustainable solutions with the Privacy Shield. Panelists agreed that it is important to develop a framework for the next generation.

Moraes spoke of the urgency to create policies for the digital economy. “If we don’t get the legislation right it will not last the test of time,” he said.

On the question of building a “ship” toward a more interoperable and open digital marketplace, Albrecht qualified the excitement of his co-panelists. “While I fully agree that we should build the ship while sailing, we need to make sure that we are not sailing illegally,” said Albrecht.

Ruebig discussed the intersection of privacy and transparency. “You can be in both pillars, but the truth is between the two,” he said.

“Privacy Shield is premised on the idea that in the decades ahead more and more data will cross the Atlantic, but the framework alone will not guarantee a future of mutually beneficial digital trade,” said Andrews.

“We, therefore, believe that the European Commission’s Digital Single Market initiative is a major opportunity to spur growth in Europe’s digital economy and demonstrate the value of openness worldwide,” he added.