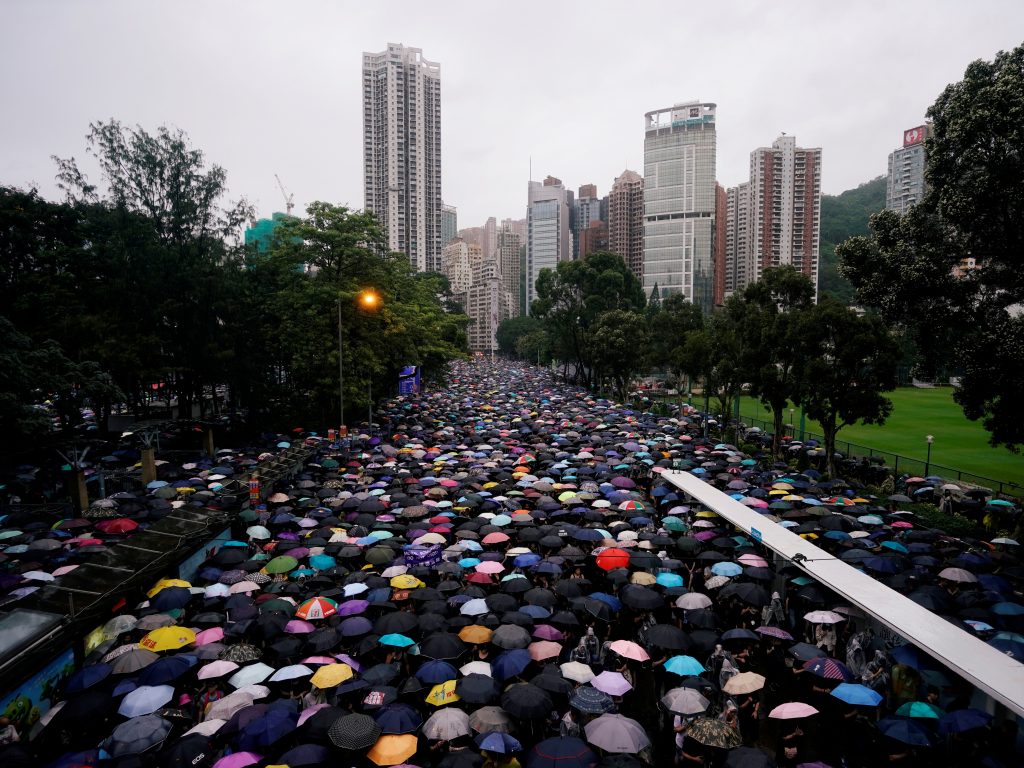 Hong Kong has been gripped by a brave protest movement sparked by Chief Executive Carrie Lam’s proposed Extradition Bill, which, though suspended, has yet to be withdrawn. Though protestors have moderate and measured requests, they have been met with the flagrantly irresponsible use of riot control devices such as tear gas in the Kwai Fong metro station. Police have turned a virtual blind eye to attacks on the press and protestors alike in Yuen Long. The protestors’ persistence has called into question whether Beijing might employ force to end the protests, envisioning another Tiananmen Square crackdown, and how Washington should potentially respond.

Constitutionally, Beijing could activate the People’s Liberation Army Garrison in Hong Kong if requested by the Hong Kong government. Still, doing so could trigger a multilateral response, ranging from financial sanctions at a time of financial instability on the Mainland to the deployment of additional hard power resources to the region. Considering the effort that Beijing devotes to censoring speech about Tiananmen at home, a similar crushing of dissent in Hong Kong would require draconian lengths, likely overstepping the One Country, Two Systems model. Even more dangerously, Beijing could use the People’s Armed Police, a paramilitary police force within the PLA’s command structure. The group has often been used to crush mainland dissent, like the 2008 protests in Tibet.

It is now more critical than ever that Washington and the international community keep focused on Hong Kong. Although it is difficult to envision the Mainland stepping down in any scenario, it is not as if the demands put forth by the protestors drastically alter the power dynamic between Hong Kong and China. The protestors do not seek a fundamental reorganization of the relationship between the Mainland and Hong Kong; their demands support the basic foundation of the One Country, Two Systems model that the Extradition Bill threatened. These are not political extremists seeking to carve off a piece of China’s territory, but rather ordinary citizens demanding the basic respects afforded by the Hong Kong Constitution.

In response to Beijing’s exaggerated deployment of harsh police activity, some have raised the question of whether Global Magnitsky sanctions would be appropriate. Contrasted with more powerful sanctions, such as dollar clearing and financing restrictions used against Iran and Russia in the past, Global Magnitsky sanctions target individuals and, depending on whom is chosen, could have strong political and reputational impact. If a symbolic denouncement is indeed the goal, as it was for Saudi Arabia after the killing of Saudi journalist Jamal Khashoggi, Global Magnitsky sanctions are likely the right tool, as they would send a powerful message of solidarity with protestors to both the Hong Kong and Mainland authorities.

Such reputational effects should not be discounted in evaluating the policy effectiveness of the Global Magnitsky designation. Given Hong Kong’s privileged status in the international financial system, the symbolic power of Global Magnitsky should not be underestimated. These designations are no longer being made in the periphery of the global financial system, affecting insiders and cronies, but rather one of Asia’s largest economic hubs, universally respected for its rule of law and investor protections. The symbolism of not only solidarity with the protestors, but also holding authorities accountable within the realistic political context of the City should not be underestimated or set aside as moral posturing. There is considerable value in the designation, yet much of Hong Kong’s allure stems from its ties to the Mainland, not necessarily from the City itself.

Since its handover, Hong Kong has positioned itself as a gateway to the tightly-restricted Mainland market. Large Chinese enterprises, including major banks, tech giants, and agile startups alike, have pursued listings on Hong Kong’s Stock Exchange to give international investors mainland exposure. The Stock Connect program has allowed foreign investors to access mainland stock markets directly both in Shanghai and Shenzhen and are subject to a daily quota. The related Mutual Recognition of Funds scheme allows Hong Kong-domiciled funds to sell shares to Mainland consumers. These factors among others will complicate firms’ decision to shift resources outside of Hong Kong, likely the most meaningful financial consequence from sanctions.

Even still, a diminishing of Hong Kong’s international status may ultimately feed Beijing’s agenda for a more Mainland-reliant financial hub. Beyond Global Magnitsky, a more robust sanctions package could pressure the New York listings of major Chinese firms or restrict access to key technological components in transpacific supply chains. Such hawkish measures, though well intentioned, could ultimately advance Beijing’s Great Bay Area Initiative (GBA), by which the Party hopes to stitch Hong Kong and Macau closer to other major cities in Guangdong Province. The region could rival the gross domestic product of the Tokyo or New York Bay Areas as early as 2030, potentially rivaling the technological innovation of Silicon Valley and even serving as the testing ground for new cross-border, yuan-denominated financial products. By pressuring New York listings, Washington could force more Mainland firms to shift to Hong Kong, while further pressure on supply chains could trigger a renewed investment push for technological self-sufficiency. With these effects, coupled with the potential exit of Western banks, multinationals, and professionals, the expanded importance of Mainland could add to Beijing’s leverage over the City, catalyzing a de-facto end to the One Country, Two Systems model.

This is, of course, assuming that there is a firm-level response. Though sanctions affect the individual decision making of compliance officers and board members, the secular reality of China’s attractiveness is clear. Though laden with bureaucracy and corruption, the sheer size of Chinese consumer markets can drive how firms ultimately respond. Even with a crackdown, this reality is unlikely to change, any more than the situation in Xinjiang has. Hong Kong’s role may diminish marginally, but the statistics are clear: China is an attractive place for firms to do business, no matter the human rights toll.

Absent the GBA, a tight sanctions regime could persuade Beijing by interrupting the tradeoff between political freedom for economic benefits. Optimistically, sanctions might deter US or European firms from the City, but they are unlikely to change the minds of Mainland state-owned enterprises or, for that matter, their party committees. Unlike other past sanctions targets, the material resources and indirect influence held by the state in the Chinese economy enable stronger resistance to coercive economic measures. Given the unique financial privileges given to Hong Kong by Mainland authorities, a robust sanctions package could, in the worst case, fragment Asian markets and reduce the United States’ standing by forcing third-country businesses to choose between two major trading partners. The consequences could be steep and, ultimately, distract from the matter at hand: the withdrawal of the Extradition Bill.

There is also the open question of China’s potential responses to US sanctions. In the past, Beijing has meshed its sanctions and trade policies, which has in essence linked compliance with ongoing Iran sanctions to developments in the trade war. In punishing other states in the region, including Taiwan, South Korea, and the Philippines, China has also pursued informal sanctions including trumped-up regulatory violations, consumer boycotts, or tourism bans that are designed to put pressure on governments and important firms. Though China may be reluctant to pressure foreign firms given the state of its economy, sanctions will almost definitely be a factor in trade negotiations in the autumn.

If this is the case, Washington should not take Chinese promises at face value and should not relax the proposed Magnitsky sanctions in pursuit of a trade deal. While stabilizing the world’s most important economic relationship should be a key goal of the administration, undermining solidarity with the protestors and the credibility of the Global Magnitsky sanctions generally would be deeply mistaken. Should the treatment of protestors worsen, Global Magnitsky sanctions against figures like Deputy Police Commissioner Alan Lau, famed for overseeing the response to the 2014 Occupy Central Movement, as well as Mainland figures, like Zhang Xiaoming, the head of Beijing’s Hong Kong and Macau Affairs Office, should be imposed.

These sanctions do not serve as a stand-in for a serious, multilateral approach to the problem of China’s human rights record. All sanctions are means to an end, rather than ends in themselves, but it is still unclear whether economic pressure on its own is enough to alter Beijing’s behavior. Hong Kong is not an isolated incident, but a symptom of Beijing’s growing revanchism, further evidenced in Xinjiang, Tibet, the South China Sea, and the Taiwan Straits. A first step in addressing this would be to take a serious, engaged approach to the ongoing Korea-Japan dispute, while toning down rhetoric, whether in the Korean Peninsula, Persian Gulf, or in NATO, that emboldens authoritarians to test America’s credibility to its allies.

To responsibly address not only Hong Kong, but also the full spectrum of Chinese abuses of the international system, sanctions should not be relied upon as the sole weapon in Washington’s arsenal. For economic measures alone to solve this matter, Washington would need to inflict damage tantamount to another financial crisis, alienating its allies and emboldening its opponents. If the situation worsens in Hong Kong, Washington should not hesitate to not only use Global Magnitsky, but also take tangible steps to boost its hard power position in the region. Though Global Magnitsky is a symbolic weapon, it may be time for Beijing to read the writing on the wall: the period of the Free World’s toleration of its human rights agenda has come to an end.