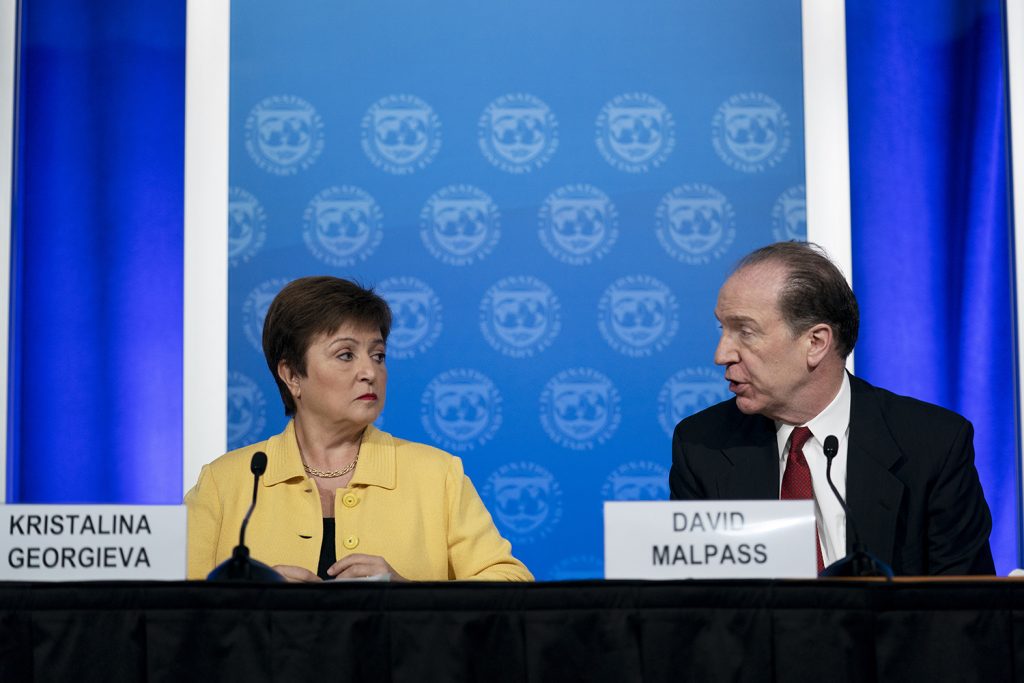 Global economic crises, such as the one precipitated by the COVID-19 pandemic, often require leadership from the world’s most predominant multilateral financial institutions: the International Monetary Fund (IMF) and the World Bank. Whether it be the “East Asian miracle” or Poland’s development success story, programs spearheaded by both financial firefighters have undoubtedly yielded successes. Critics of these institutions would argue, however, that despite repeated interventions much of the Global South remains trapped in cycles of financial instability, poverty, and large debt. As COVID-19 further exposes vulnerabilities in the resilience of developing country economies and their fiscal architectures, a critical question is whether either international powerhouse has deployed an appropriate response to the current crisis—and whether they are well suited to addressing it at all.

South Asia faces significant and disproportionate barriers to receiving the financial support necessary to weather the crisis. While advanced economies can borrow money at low interest rates to fund economic stimulus, South Asia (and the Global South more generally) faces rising interest rates that increase its borrowing costs, just as its most important sources of revenue—commodity exports, tourism, and remittances—fall. To date, foreign investors have pulled $26 billion out of developing Asian economies, $16 billion of which come from India. At the close of 2020, remittances to the region are expected to decline by 22 percent, and tourism has come to a screeching halt. Given the region’s deteriorating economic outlook, heavy funding from International Financial Institutions (IFIs) is crucial to prevent a prolonged public health crisis and financial woes. Unfortunately, this has not yet materialized.

The consensus decision-making process within both IFIs remains tedious and has resulted in little lending to developing countries. The IMF might trumpet its headlining figure of $1 trillion in lending capability, but as of mid-June the organization’s total lending commitments are just a quarter of its reserves: $245 billion. Furthermore, despite recurrent discussions, the idea of special drawing rights remains missing from the organization’s response. Alongside the IMF’s lack of aggressive action, The World Bank claims to provide up to $160 billion in financing for its coronavirus response, yet has dispersed little more than $74 billion to last through 2020. Amid the greatest shock of the decade, the lion’s share of the world’s lending capacity sits unused.

Much of the IFIs’ dispersed emergency funding is allocated through a Rapid Credit Facility, absent the traditional, highly conditional, and highly controversial IFI structural adjustment programs (SAPs). While this is a positive shift away from the conventional conditionalities, once countries transition from emergency loans into full-fledged programs, IFIs may easily reintroduce conditions as occurred following the global financial crisis. Less than two years after the crisis, the Fund pushed austerity policies and fiscal consolidation—key elements of SAPs—onto its member states. Historically, these reforms garnered little success. And yet, IFIs continue to implement similar programs and yield identical results, of which Pakistan is a prime example: last year the country accepted a $6 billion bailout program from the Fund—its thirteenth loan in thirty years. The frequency of IMF programs for Pakistan, systematically centered around similar structural conditionalities, is a marked sign of their inefficiency. Insanity is sometimes described as doing the same thing repeatedly expecting a different result, and this is no exception.

The crux of SAPs—privatization—does not automatically yield economic gains in the Global South. Transferring ownership from the public to private sector whilst liberalizing trade in states with weak infrastructure, little capital, and limited economic resources—and in the middle of a pandemic—could weaken domestic markets and be a gateway to greater corruption and cronyism. In Pakistan, $23.84 billion worth of corruption related to privatization occurred during the Pervez Musharraf-Shaukat Aziz period. Resulting weak domestic demand and heavy reliance on both volatile global finance and increasingly competitive export markets will undoubtedly widen inequality in the distribution of health and income between classes. In the context of COVID, this means the poor will increasingly bear the brunt of the pandemic and its aftermath. What’s more, the traditional tight monetary policies and tight fiscal policies required to reduce the budget deficit and strengthen exchange rates will not only cause a slowdown in economies, but also pave the way for a coming recession; Sri Lanka’s 2017 economic growth rate fell 3.1 percent from 4.4 percent in 2016 due to the aforementioned. Thus, considering the region’s overall current and projected weakened economies, in conjunction with the failure of previous SAP strategies, the chances of yielding success by reimplementing further World Bank and IMF reforms in South Asia are slim.

Easing the detrimental effects of the pandemic in South Asia will undoubtedly depend on the economic policy action taken by governments. Preventing a subsequent depression and responding to current financial issues is necessary, and priority must not be given to austerity and privatization programs that only incentivize corruption and inequality while leaving the masses out to dry. Rather than limit state intervention through structural adjustment programs, the IMF and the World Bank should seek to increase the government’s role. The Group of Twenty (G20), for example, can make a more coordinated and more generous commitment to the Global South by increasing bilateral assistance. For instance, the IMF projected that $2.5 trillion was needed to overcome the crisis, a far cry from the Fund’s $1 trillion lending capacity. This will require that both the IMF and the World Bank lift loan ceilings and loosen eligibility for loans, to be more inclusive. Many developing countries have underdeveloped and overwhelmed health systems, so there should be increased attention towards donating supplies and expertise. Safeguarding vulnerable populations and enhancing equity in development was critical prior to the pandemic, but it is now more important than ever.

Capucine Querenet is an intern with the Atlantic Council’s South Asia Center and an undergraduate student at the University of California, Berkeley.