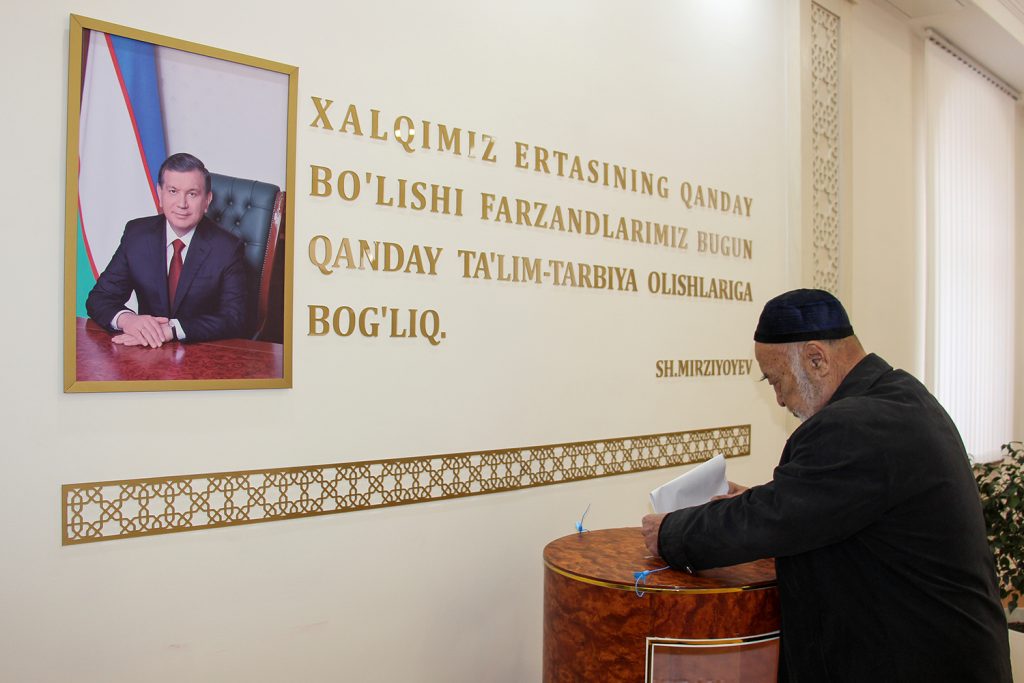 There is a heated debate in Uzbekistan about its relationship with Russia, which quite suddenly has triggered further debate about history, language, and other neglected issues during the past thirty years. Deliberation about potential accession to Russia’s Eurasian Economic Union (EUEU) sparked disputes about Uzbek language policy and what role, if any, Russian language should have in society.

The discussion is surprising because it pits the large Uzbek-speaking majority against a strawman: a very small Russian-speaking minority, including many Uzbeks—especially those in the capital—who still struggle with Uzbek. These deliberations also reveal attitudes towards Uzbek President Shavkat Mirziyoyev’s outreach to Moscow after the death of his long-serving predecessor in 2016, Islam Karimov, who was deeply suspicious of Russia. A growing anti-Russian sentiment may limit the Mirziyoyev government as it seeks closer ties to Moscow. More importantly, these events reveal the unconventional growth of civil society in Uzbekistan, much of which has emerged online.

These issues shed light onto a changing Uzbekistan. First, hardening on language policy at the expense of the Russian language is a significant reversal from Karimov’s tacit encouragement of pluralism. Second, the events show a growing public voice in foreign policy decision-making. Third, it demonstrates the expanding role of civil society on the internet, which has become the most meaningful public square in Uzbekistan.

President Karimov held Russia at arm’s length and never seriously entertained joining the EAEU. In contrast, Mirziyoyev has opened Uzbekistan’s relations with many countries, including the United States, and has opened Uzbekistan to cooperation with Russia in ways not seen since the fall of the Soviet Union. Trade between the two nations has skyrocketed in recent years, cemented by an agreement with RosAtom to build a controversial nuclear power station just outside Tashkent.

Uzbekistani “oligarchs,” who gained their wealth in Russia and who had little to do with their native country after independence, are another sign of the return of Russia, including the return of oligarchs Alisher Usmanov and Pattokh Chodiev. They are, now, heavily involved in a range of commercial ventures, as well as charitable efforts. Usmanov and Chodiev contributed millions to help both Uzbekistan’s fight against COVID-19 and to Mirziyoyev’s signature Obod Qishloq rural development program. As former classmates at the Soviet Union’s prestigious Moscow State Institute of International Relations (MGMIO), they joined forces last year to finance a branch of MGMIO in Tashkent.

Last year, it seemed almost certain that Uzbekistan would join the EAEU, most of Uzbekistan’s political parties competing in the December 2019 parliamentary election supported accession. After the new parliamentary session began, newly elected members of parliament began to speak out against accession, reflecting of growing debates among Uzbekistan’s previously quiescent Parliament (it may also be true that US reservations—expressed last fall by Commerce Secretary Wilbur Ross—played a role). On April 28, the Parliament ratified the Cabinet of Minister’s March 6 proposal to join the EAEU as an observer rather than a full member.

These debates are representative of new discussions on social media about the Soviet legacy in Uzbekistan. For example, independent journalist Karim Bahriev wrote a viral article on the taboo topic of “Russian Chauvinism.” This article linked Uzbekistan’s historical ties to Russia with a diminished role of the Uzbek language. A well-known blogger, Shaxnoza Soatova has become a vocal advocate for strengthening the Uzbek language. She was recently appointed Advisor on State language at the Ministry of Justice, which recently issued new decrees promoting Uzbek, arguing that the language has not developed since independence.

On May 14, Russia’s Foreign Ministry spokeswoman advised Tashkent against adopting this bill. This was met with a swift response by Uzbekistani politicians, who warned Russia not to meddle in their internal affairs.

Discouraging ethnic tension was central to late President Karimov’s conflict-averse, authoritarian ideology. He feared what he perceived as nationalist-inspired chaos in neighboring republics. Furthermore, the only political party that challenged Karimov, Erk (Freedom), had a what many perceived to be a nationalist agenda. Led by Mohammad Solih, the party prioritized revitalization of the Uzbek language. Solih launched an unsuccessful campaign for president against Karimov in 1991 and was forced to flee the country shortly thereafter. His escape marked the end of the discussion of the role of the Uzbek language in society.

Karimov had a surprisingly laissez-faire attitude towards language in order to discourage tensions. The 1995 Law on State Language, which recognizes Uzbek as the sole state language and mandates that government work should be in Uzbek only, was never enforced. Government documents, today, continue to be written in Russian. In Tashkent and other cities where Russian speakers live, you will find stores with signs in Russian. Language choice has been left up to storeowners or ministry officials.

Karimov discouraged nationalism through another pillar of his ethnic policy: refusing foreign policy entanglements with ethnic Uzbeks in neighboring republics. This, combined with laxness towards language enforcement, allowed Uzbekistan to stay relatively free of ethnic tensions—both internally and externally—for many years.

Debates over Uzbek language have been quite public and intense, most of which has taken place online.

Mirziyoyev has removed most restrictions on the internet, unleashing long, suppressed debates on this, once, taboo topic—language. In a shocking video that swirled around social media in 2018, the Director of the International Press Center and Rector of the Journalism University was videotaped castigating a Russian-speaking woman for not speaking Uzbek. Some Russian-speaking Uzbeks have stood up to defend Russian, drafting a petition calling for Russian to have official status alongside Uzbek. Others have argued that the Kremlin sponsored efforts to elevate Russian. This growing discussion of Uzbek language highlights the absence of an Uzbekistani identity, which could encompass all groups in society.

For the first time ever, Uzbekistan has the political space to have deeply painful, yet, meaningful debates about the role of Uzbek language in society, which are inextricably tied to foreign policy considerations. You will not find these issues debated on national TV or in print media. You will find them on Telegram channels, Facebook pages, and a burgeoning internet media. This is indicative of the unconventional growth of Uzbek civil society, where a vibrant public square has come into being on the internet.

Jennifer Brick Murtazashvili is director of the Center for Governance and Markets and associate professor of International Affairs at the University of Pittsburgh.

Passing the baton in Turkmenistan

The capital, Ashgabat, is whispering that the president plans to place his son Serdar in a leadership role, while he takes on the mantle of sage advisor, becoming the power behind the throne (rather than on it). In essence, Berdimuhamedow is securing hereditary succession for his son, while retaining power.

How governments can use cyber tools irresponsibly to preserve power

Image: A man casts his ballot next to a portrait of Uzbekistan's President Shavkat Mirziyoyev during parliamentary election in Tashkent, Uzbekistan December 22, 2019. REUTERS/Mukhammadsharif Mamatkulov/File Photo