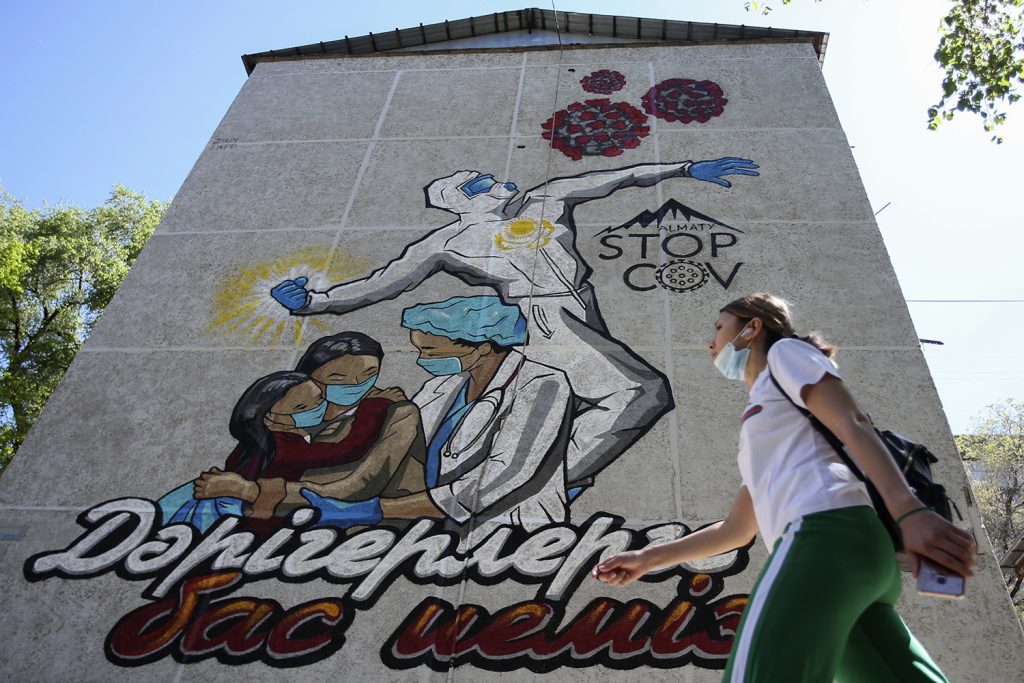 As COVID-19 spreads around the world, the states of Central Asia, including Kazakhstan, Kyrgyzstan, Tajikistan, Turkmenistan, and Uzbekistan, are taking their individual paths in combating the pandemic. The governments of these countries are being tested on their ability to manage extraordinary stresses previously reserved to wars, economic collapses, and natural disasters. Not only does it expose countries’ severe vulnerabilities across health and socio-economic dimensions, but also defines nations’ political perspectives.

So far the results are mixed. As of April 28, Kazakhstan, the region’s largest economy, reported 3,920 infections, with 1,939 in Uzbekistan, and 708 in Kyrgyzstan. The three countries report forty-seven deaths in total—a small number, especially if taken on per capita basis.

The other two countries, Tajikistan and Turkmenistan, had been clinging to a fantastical claim of zero cases for weeks, despite the recent spike in mysterious deaths attributed to pneumonia. Tajikistan finally reported its first fifteen confirmed cases on April 30, after weeks of speculations and warning from international experts.

Hope for the best, expect the worst

The baseline scenario from the World Bank, which presumes that containment measures are lifted by the end of the second quarter of the year, suggests that gross domestic product (GDP) growth in Central Asia will decrease by -5.4 percent in 2020. Furthermore, the global demand collapse for oil, followed by the breakdown of the Organization of the Petroleum Exporting Countries Plus (OPEC+) agreement between major oil suppliers in March, caused a dramatic fall in prices not just in crude but across multiple commodities Central Asian countries economies export. From mid-January to mid-March, base metal prices dropped by about 15 percent, natural gas prices declined by 38 percent, and crude oil prices decreased by about 65 percent.

The economic impact. The governments of Central Asia are taking various steps to mitigate against and adapt to the consequences of the pandemic. At the international level, multilateral financial institutions have offered a set of fast-track instruments in response to COVID-19, targeted at both private and sovereign finances. For example, the Asian Development Bank (ADB), increased the speed of loan disbursement under its existing programs. The ADB Trade Finance Program (TFP), which functions in Kyrgyzstan, Uzbekistan, and Tajikistan, was increased from $1.35 billion to $2.15 billion to support projects that respond directly to the impacts of COVID-19 or address its economic impacts. Uzbek President Shavkat Mirziyoyev signed a decree that will allow the country to take $3.1 billion in soft and long-term loans from international financial Institutions, including the World Bank, the ADB, the Islamic Development Bank, and the Asian Infrastructure Investment Bank.

In its struggle to alleviate economic consequences of the virus, Kyrgyzstan has also asked China for debt relief. Washington is willing to help as well: according to the State Department, the Trump administration offered $274 million to assist Central Asian states in their fight against the pandemic as well. At the request of Kyrgyzstan and Tajikistan, Kazakhstan has provided humanitarian assistance, which includes 5,000 tons of flour for each country worth more than $3 million.

Domestically, the degrees of fiscal support for the most vulnerable households and businesses varied across the region. Endowed with its sovereign national fund, Kazakhstan is allocating about $10 billion to fight the pandemic and $740 million to boost employment. The projected KZT/USD exchange rate will be 440 to 1 dollar, inflation will rise to 9-11 percent, and the government will borrow KZT 2.7 trillion from the National Fund. On April 8, President Kassym-Jomart Tokayev signed the modified 2020 budget, injecting a massive liquidity package.

According to the deputy chair of Kazakhstan’s National Bank, Aliya Moldabekova, the Bank’s reserves of around $57.5 billion was enough to help Kazakh citizens and businesses in quarantine-mode.

As of April 16, the direct payments of $100 (KZT 42500) to the vulnerable population cost at least $270 million, one of the boldest steps the government has undertaken to combat the social fallout. The government has also extended tax incentives measures that would benefit more than 700,000 companies and individual entrepreneurs and would allow them to save about KZT 1 trillion (more than $2 billion). Additionally, President Tokayev assigned the government and National Bank to develop economic growth rehabilitation package to help the worst hit industries by May 11.

These are commendable steps which should be modeled by the rest of the region, but more can be done, including the assistance to small and medium enterprises, loan payment moratoria, and food assistance to the poorest.

Health response. While the other Central Asian nations started implementing lockdown measures starting mid-March, life carried on as usual in Tajikistan and Turkmenistan. Large scale events, including a lavish celebration of Nowruz in Tajikistan and a presidential-sponsored sadaka meal for 1,500 quests at a mosque in Turkmenistan, were held.

Despite its weak healthcare resources, in late April Uzbekistan has opened its first infectious disease hospital outside of the capital, Tashkent. The facility is capable of providing treatment for 1,000 patients, while the entire capacity of the hospital is expected to be at 10,000 by the end of May. The European Union pledged €2.2 million to support Uzbek’s government efforts in health sector in combating the outbreak as part of the World Health Organization’s strategic plan for preparedness and response for the country.

Kazakhstan is better positioned to deal with the crisis than its neighbors given the relative strength of its economy and gradual healthcare sector improvements over the past decade.

The US Centers for Disease Control (CDC) approved $1.68 million to support Kazakhstan as part of a $6.8 million package of assistance for Central Asia, recognizing it as a regional leader in pandemic response. Kazakhstan is home to the US-backed emergency operations center, the director of which received training from the CDC’s Public Health Emergency Management Fellowship Program. Kazakhstan managed to construct a new 200 bed hospital for COVID-19 patients in its capital in only two weeks. The facility complies with the standards of the World Health Organization.

The Kazakhstani government opened flights from May 1 between the capital and the country’s biggest city, Almaty, where citizens will be required to certify that they are not infected with the virus. The country’s health ministry is still facing the task of increasing the volume of testing to at least 20,000-25,000 tests per day, which corresponds to international standards. Nevertheless, Kazakhstan is the clear regional leader in terms of its pandemic response.

Guaranteeing food security. A steady rise in countries limiting or banning food exports has triggered warnings from United Nations World Food Program leader David Beasley about possible disruptions to the global food supply. The Eurasian Economic Union banned exports of sunflower seeds, onions, and vegetables outside the Russia-led bloc. Poor wheat crops in Turkmenistan have created a dependence on imports of flour, payable only with hard currency. Kyrgyzstan and Tajikistan, as mountainous countries unsuited for large-scale grain production, as well as arid Uzbekistan, already depend on Kazakhstan for wheat and flour imports.

To increase food security in the region, the governments of Central Asia should coordinate with the United Nations to secure resources from one of six global UN Humanitarian Response Depots (UNHRD) and discuss the establishment of one such warehouse in the region—ideally in Kazakhstan—by virtue of its geography and infrastructure. In the interim, the governments of Central Asia should continue to build their strategic food stockpiles and take steps to ensure the continuity of supply chains.

In times of crisis, citizens naturally look to governments for reassurance, guidance, and leadership. This is a golden opportunity for the leaders of Central Asia to showcase their capabilities to the world and build trust from their citizens. On the other hand, a poorly managed health crisis will result in dire political consequences—and needless deaths. It is quite possible that proper crisis management in Kazakhstan, Uzbekistan, and Kyrgyzstan will boost popularity of their relatively recent leaders, while the “denial strategy” in Turkmenistan and Tajikistan will exacerbate the severity of impending policy crises. To emerge safely from this pandemic, the governments of Central Asia must work locally and globally to identify best practices, share resources, and protect the most vulnerable—citizens and economic sectors alike.

Ariel Cohen, Ph.D. is a nonresident senior fellow at the Atlantic Council and Director of the International Tax and Investment Center’s Energy, Growth, and Security Program. You can follow him on Twitter @Dr_Ariel_Cohen.

Image: A woman wearing a protective mask walks past a mural, dedicated to medical specialists involved in the fight against the coronavirus disease (COVID-19), in Almaty, Kazakhstan April 24, 2020. The mural reads: "We bow our heads to physicians". REUTERS/Pavel Mikheyev