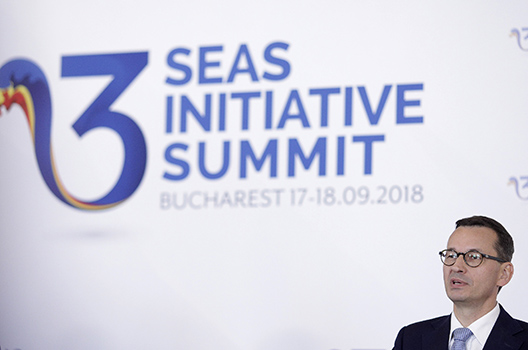 On February 11, US ambassadors from twelve EU member states met in Warsaw to discuss the ways in which the United States can help the Three Seas Initiative, a project that seeks to facilitate interconnectivity on energy, infrastructure, and digitalization projects in Central and Eastern Europe. The meeting, led by the Atlantic Council and its Executive Chairman Emeritus retired Gen. James L. Jones, Jr., comes on the heels of US Energy Secretary Rick Perry’s visit to the Three Seas Initiative summit in Bucharest in September 2018, and a little over a year after US President Donald J. Trump endorsed the project while taking part in a 2017 summit in Warsaw.

My colleagues from U.S. Embassies in 12 EU capitals and I are brainstroming in Warsaw on how we can best support the #ThreeSeas Initiative. pic.twitter.com/imb4KmIHNQ

As the United States looks to confront Russian and Chinese economic and geopolitical competition in Europe and across the world, the Three Seas Initiative offers an opportunity to strengthen the economies of US allies in Central and Eastern Europe and reduce their dependence on Moscow and Beijing’s economic overtures. Here is a quick look at the project and what it means for the United States.

What is the Three Seas Initiative?

Launched in 2015 by Croatian President Kolinda Grabar-Kitarović and Polish President Andrzej Duda, the initiative creates a political platform to promote connectivity among nations in Central and Eastern Europe by supporting infrastructure, energy, and digital interconnectivity projects.

The initiative gets its name from the three seas that border the region: the Baltic, Black, and Adriatic Seas. The twelve states that are part of the initiative are Austria, Bulgaria, Croatia, the Czech Republic, Estonia, Hungary, Latvia, Lithuania, Poland, Romania, Slovakia, and Slovenia.

Speaking at the 2018 Bucharest Summit, Grabar-Kitarović said that the initiative would “make Central Europe the backbone of European resilience,” and move the newer member states of the European Union  (EU) closer to economic convergence with their Western neighbors.

What will the Initiative specifically do?

The Initiative will help secure funding and coordinate implementation of cooperative infrastructure, energy, and digitalization projects. The main goal of the venture is to create a “north-south” energy and infrastructure corridor in the region. The Three Seas Initiative is a follow-on from the “North South Corridor” project led by the Atlantic Council’s General James Jones and Resident Senior Fellow Ian Brzezinski in 2014.

As Brzezinksi and Senior Fellow for Energy Diplomacy David Koranyi wrote, “For more than half a century after the end of World War II, infrastructure interconnections on the continent focused on the development of the East-West axis. During the Cold War, pipelines that delivered Soviet oil and gas to Central and Eastern Europe also served as tools of submission and control.”

To this day, most gas pipelines and even highways flow primarily east to west, as countries remain reliant on Russian energy imports and have prioritized connections with their Western neighbors. The Three Seas Initiative aims to right this imbalance by supporting the development of energy, transportation, and digital infrastructure within Central and Eastern Europe broadly, and along a north-south axis specifically.

What types of projects will the Initiative support?

On energy, the Initiative will look to capitalize on the new liquified natural gas (LNG) terminals in Świnoujście, Poland, and Klaipėda, Lithuania, as well as a potential future terminal to be built in Krk, Croatia. Connecting these new sources of LNG south from Poland and Lithuania, and north from Croatia could substantially lessen the need for Russian gas imports in the region. In addition to these LNG sources, the Initiative will also look to support the connection of regional energy networks to the Trans Adriatic Pipeline between Greece and Italy, as well as connect new Romanian Black Sea gas reserves to the region.

New priority projects on transportation include new north-to-south highway connections, support for new and existing rail lines between countries in the region, and plans to complete a water corridor between the Danube, Oder, and Elbe rivers.

On digital and telecommunications interconnectivity, projects include platforms for enhanced digital trade, research collaboration, and a plan for a “Three Seas Digital Highway” that will link the region through communications infrastructure, fiber optics, and eventually 5G technology infrastructure.

What is the role of the United States and the European Union in the project?

The Trump administration has been vocal in its support for the Three Seas Initiative as an opportunity to strengthen the economies of key US allies in the region and to lessen the region’s dependence on Russian energy imports, a key US concern. Speaking at the 2017 Three Seas Initiative Summit in Warsaw, Trump said the project would “transform and rebuild the entire region and ensure that your infrastructure, like your commitment to freedom and rule of law, binds you to all of Europe and, indeed, to the West.”

In addition to political support, the United States is also aiming to help spur private investment in some of the projects. During the 2018 Bucharest Summit, Perry announced a new “Partnership for Transatlantic Energy Cooperation” (P-TEC) initiative to help “raise these projects to the top of the political and economic agenda for their wider visibility and attractiveness.” The US energy secretary said he hoped the Three Seas Initiative could attract substantial investment from US and multinational businesses to work in partnership with governments to build new energy and transportation infrastructure.

Much of the funds for the projects will be from European Union Investment and Structural Funds, of which Three Seas countries have already pledged to use €2.5 billion by 2020, as well as a Three Seas Investment Fund (TSF), which six Three Seas nations created in 2018.

Initially the Three Seas project drew some skepticism from the EU and other Western European neighbors as the heavy political support from the United States worried Brussels that the Initiative could be used to undermine the EU’s authority or standing in the region, according to Atlantic Council Distinguished Ambassadorial Fellow Daniel Fried. But the EU now appears fully onboard, as Three Seas nations and Washington made it clear that the project would be “consistent with and supportive of European Union’s role and these countries membership in the EU,” said Fried. In a sign of the support, both European Commission President Jean-Claude Juncker and German Foreign Minister Heiko Maas attended the 2018 Bucharest Summit.