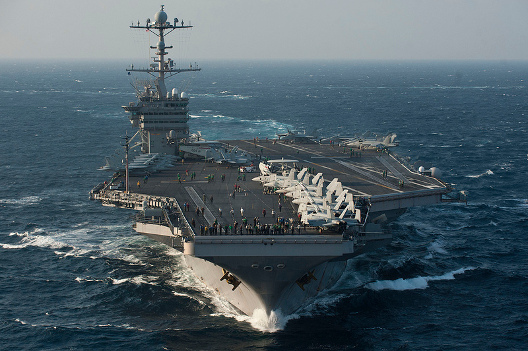 As the White House struggles to cope with a burning Middle East, another vital challenge is arising on the far horizon — China is flexing its muscles with real consequences for America’s future in Asia.

In the East China Sea, the United States worries about a stand-off between our ally Japan and Beijing over conflicting, historical claims to small, uninhabited islands the Japanese call the Senkakus and the Chinese call the Diaoyu. China opposes Japan’s ownership of the islands and, in November, announced creation of an Air Defense Identification Zone in the East China Sea that directly challenged the right of Japanese, American, and other aircraft to transit airspace in the area without prior notification to Beijing. China has made equally extravagant legal claims in the South China Sea against Filipino and Vietnamese territorial claims.

As my Harvard colleague, Graham Allison, recounts in the National Interest, China’s actions are playing out on a broad historic canvas with Beijing and Washington as the main actors. He reminds us of the “Thucydides Trap”— when, in past centuries, “a rapidly rising power rivals an established ruling power, trouble ensues. In 11 of 15 cases in which this has occurred in the past 500 years, the result was war.”

The immediate challenge is in the East China Sea. Tokyo defends its long possession of the islands through naval and air patrols while Beijing counters with its own naval vessels and aircraft to contest it. The obvious risk is potential collision by two powerful militaries at sea and in the air. The stakes are very high for the United States as our defense treaty with Japan obligates us to come to its assistance in the event of conflict with China.

The United States has rightly stood by Japan against China’s unilateral claims. Washington is also counseling China to gain better control of the often-willful People’s Liberation Army and submit its territorial claims to international adjudication rather than assert them by fiat and intimidation.

To be fair, however, Washington is also advising Japan’s nationalist Prime Minister, Shinzo Abe, to lower the temperature in his rivalry with China. His recent visit to the Yasukuni Shrine, where war criminals from the Second World War are buried, as well as Japan’s refusal to acknowledge the horrific actions of its military during the Second World War, are unnecessarily provocative to the Chinese, South Korean, and Filipino peoples.

As the United States seeks to keep the peace in the East China Sea, the immediate danger is not so much that Japan or China will decide to launch a war for the islands but that they might stumble into conflict by mistake or miscalculation.

British historian Margaret MacMillan warns of such a risk in a recent Brookings Institution essay. She recounts the improbable and unplanned events that led to the outbreak of war in 1914 in which 16 million combatants and civilians eventually perished. Her essay is a direct warning — we can’t take the current Great Power peace for granted. Human folly, frailty, and hubris could lead the great powers of our time — among them China, Japan, and even the United States — into a conflagration we never believed was possible. “The one-hundredth anniversary of 1914 should make us reflect anew,” she warned, “on our vulnerability to human error, sudden catastrophe, and sheer accident.”

The East China Sea Crisis and the lessons of World War I remind Americans of a final stark reality — global peace and security still depends on us more than any other country. It is thus essential that we remain the world’s strongest diplomatic and military power. Congressional leaders in both parties supporting deep cuts in the State Department and Pentagon budgets should remember that in Asia, the Middle East, and beyond, we are still, as Madeleine Albright once rightly claimed, the world’s “indispensable” nation.

Image: he aircraft carrier USS George Washington (CVN 73) is in the East China Sea during a trilateral exercise with the Japan Maritime Self Defence Force and Republic of Korea Navy, June 2012. (Photo: US Navy/Public domain)