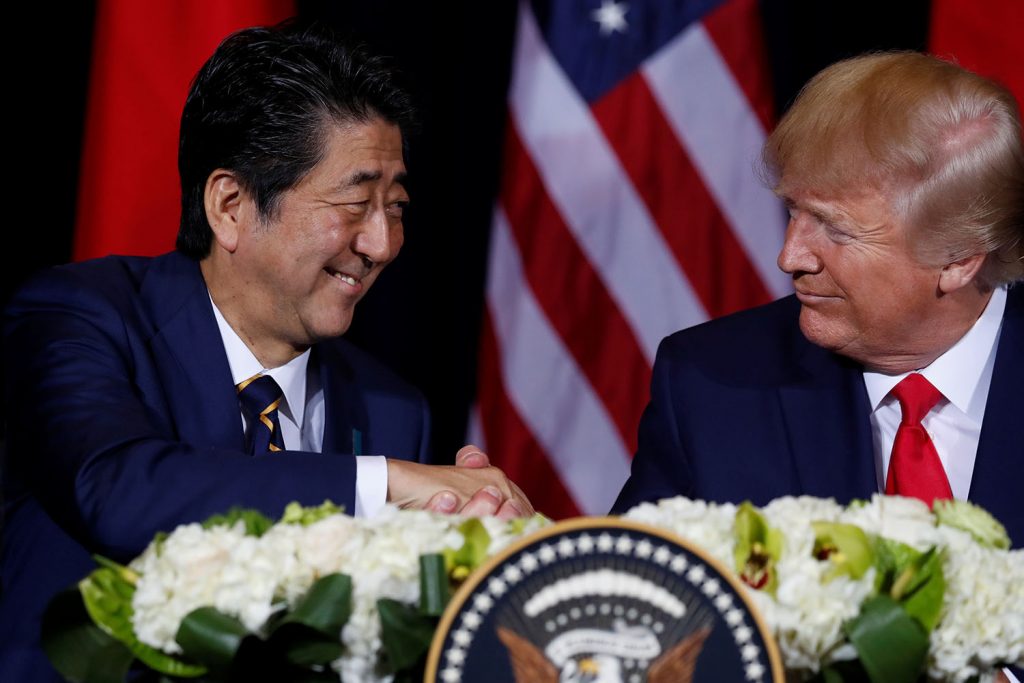 Japan's Prime Minister Shinzo Abe shakes hands with US President Donald Trump after signing a joint statement on trade during a bilateral meeting on the sidelines of the 74th session of the United Nations General Assembly (UNGA) in New York City, New York, US, September 25, 2019. REUTERS/Jonathan Ernst

On the margins of the United Nations General Assembly (UNGA) meetings several weeks ago, US President Donald J. Trump and Japanese Prime Minister Shinzo Abe announced the conclusion of a much-anticipated new trade agreement. This deal, described by the two countries and commentators as an interim agreement, provides for a limited number of tariff concessions—mostly agriculture products for US exports and a range of industrial and agriculture products for Japanese exports—and a framework of agreed commitments on digital trade issues. The agreement attracted significant attention—after all, it is now the default outcome after the Trump administration abandoned the Trans-Pacific Partnership (TPP), which included a much broader and deeper set of commitments between the United States and Japan. And while several analysts highlighted questions about whether it might comply with standards set out in the World Trade Organization (WTO), their comments were generally drowned out by analysis of the benefits to US farmers, implications for trade in autos, and a Trump trade win in the context of the 2020 US presidential election.

In fact, a more central question—and challenge—might be what this agreement means for the future of the multilateral trading system. The WTO has been taking multiple hits since the arrival of the Trump administration, including dismissive comments by the US president about how the WTO has served US interests and the current crisis over the continued viability of the Appellate Body. However, now there is a new threat that is potentially more existential, even if it plays out in a slow-drip fashion. If the United States were to complete additional tariff-cutting deals with such limited scope and other countries were to follow this model in their bilateral trade negotiations, the WTO might confront a gradual erosion of one its central tenets—most favored nation, or “MFN,” treatment.

The multilateral trading system, put into place in 1947 and now embodied in the WTO since 1995, is built on a foundation of equal treatment among member countries. The origins of MFN in trade go back centuries, and the principle is underpinned by compelling economic and political considerations. From an economic standpoint, MFN promotes uninhibited trade that can lead to optimum efficiency outcomes. In theory, the global economy will grow more, to the benefit of all, than would be the case with strictly bilateral, preferential trade relationships. From a political standpoint, MFN, as institutionalized multilaterally with the creation of the post-World War II trading system, promotes mutual trust and shared commitment among all members who abide by the rules of the system.

Under WTO rules, there can be only very limited exceptions to MFN. One form is through waivers, which require a consensus of all members and is generally limited to unique exceptions, such as US legislation that provides benefits to sub-Saharan African nations and to Nepal since it suffered a devastating earthquake. A second form is through programs that are designed to benefit all developing countries (so-called Generalized System of Preferences or “GSP.”) A third form is for bilateral or regional free trade agreements (FTAs) and customs unions. Customs unions are relatively few in number, such as that which is part of the European Union. FTAs, however, have become much more common over the last two decades and have aroused concerns that their proliferation is a threat to multilateralism in trade.

What keeps the overall quantity of FTA exceptions to the WTO’s MFN rules in check is the requirement, set forth in Article XXIV of the WTO’s core agreement on trade in goods, that an FTA cover “substantially all trade” between countries that are part of that agreement. While this requirement means that a qualifying agreement must provide tariff-free trade for virtually all trade between these countries, which in itself erodes MFN treatment globally, it makes it much more difficult for countries to negotiate and conclude such comprehensive agreements.

If now the United States and others following in its footsteps begin to negotiate agreements that cut tariffs between them on a significantly smaller scope of products, these agreements that are exceptions to the rule could become much easier to conclude. This scenario might eventually lead to an MFN system shot through with exceptions to this core principle of multilateralism on trade. With so many holes—large and small—to its original blanket coverage of equal treatment among all, it is highly probable that someday there will be virtually no such equality under the system that remains.

Some may argue that MFN will still exist in application of trade rules beyond tariffs, such as regulatory measures that affect trade, but once the restraint that has applied for tariffs no longer exists, what compunction might countries have to maintain it beyond tariffs? Others may argue good riddance—the existing system has not allowed for reciprocity in trade, and it is time for reciprocity to be the new core principle in global trade relationships. Generally, however, economic stakeholders—producers, exporters, and importers in all countries—prefer limited deviations from the norm in national tariff schedules. The greater the complexity of a tariff schedule, the greater the confusion and instability experienced by companies, large and small, in all countries.

The central point here is that the multilateral trading system is facing threats across multiple fronts, and it is essential that its defenders fully understand the magnitude of such threats and find ways to overcome them if the system is to continue to be relevant to global trade for the foreseeable future.  There are any number of ways to fight back—pursuing dispute settlement challenges against measures and agreements that violate its rules; finding new approaches for negotiating new rules, as many have already sought to do since the demise of the ill-fated Doha Round of negotiations; ensuring that bad examples are called out and efforts are made to dissuade others from following them. However, hand-wringing and hollow public statements that bemoan the situation will not be effective in altering the reckless course that some WTO members have been following. Those who wish to protect and extend the multilateral trading system will need to be bold in responding with action and creative in generating ideas to update it. Otherwise, they will be forced to simply adapt to a world in which the multilateral trading system slowly erodes away and eventually goes the way of the dodo.