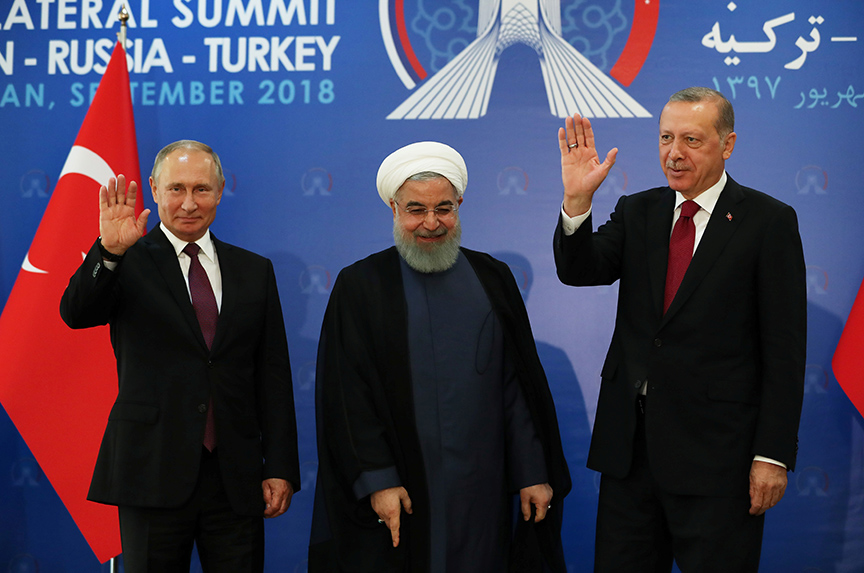 Syrian President Bashar al-Assad’s regime, backed by Russia and Iran, has made clear its intentions to seize control of Idlib province—the last remaining rebel-held stronghold in the war-ravaged nation. Now, with Russian ships moored in the Mediterranean Sea and Assad’s forces closing in from the south, it is methodically going about doing just that.

What happens next depends very much on Assad, Russia, Iran, and Turkey. It was no wonder then that all eyes were on a meeting between the Russian, Iranian, and Turkish leaders in Tehran on September 7. Efforts by Turkey to defuse the crisis, however, appear to have hit a wall: Russian President Vladimir Putin.

Why is Idlib important?

To the Assad regime, Idlib represents the final major frontier of resistance. Extinguishing this challenge is hence a priority. Russia and Iran, longtime backers of the Assad regime, naturally endorse this position.

To Turkey, Idlib matters because of its location—Syria’s northwestern province sits across the border from Turkey. The Turkish government is deeply invested in defusing the situation because full-blown military conflict could have serious ramifications. First, there is the danger of a jihadist threat on its border and second, there is the very real likelihood of a humanitarian crisis as people fleeing the fighting spill over the border. Turkey already hosts more than 3 million Syrian refugees.

Are there terrorists in Idlib?

The Assad regime, Russia, and Iran have said they want to rid Idlib of “terrorists.” At their meeting in Tehran on September 7, Putin and Iranian President Hassan Rouhani spoke of the need to eliminate terrorists in Idlib.

It is estimated that there are up to 30,000 rebel and jihadist fighters in Idlib, a province with a population of three million.

The most dominant of these groups is Hayat Tahrir al-Sham (HTS), al-Qaeda’s former affiliate. HTS had a public falling out with al Qaeda in late 2017. This resulted in splinter groups that have further complicated already mindboggling dynamics in the war.

Is the Assad regime using HTS as an excuse to target Idlib? “It is true that framing the offensive as a counterterrorism operation has public relations benefits for Assad and Russia, but in truth they both consider any armed opposition to the state to be terrorism and intend to take Idlib, by force if necessary, whatever the ideology of the dominant militias there,” said Faysal Itani, a senior fellow with the Atlantic Council’s Rafik Hariri Center for the Middle East.

The military escalation around Idlib has heightened the potential for a confrontation between Russian and US forces.

CNN reported this week that the Russians have warned the US military that its forces are planning to attack an area where US troops are present. “Moscow’s declaration has sharply raised US commanders’ concerns that American forces would be at risk if a Russian attack goes forward… And it has sparked US warnings to Moscow not to challenge the US military presence,” according to CNN.

Several US defense officials told CNN that concerns center on a US-led anti-ISIS coalition base at At Tanf. US troops help monitor a thirty-four-mile exclusion zone around the base. “Given its location near the borders of Syria, Jordan, and Iraq, the At Tanf garrison is seen as a key strategic location as the US, Iran, and Russia compete for influence in the region,” CNN reported.

The threat of chemical weapons

The threat of chemical weapons has for years loomed large over the war in Syria. Once again it is an important factor as things heat up in Idlib.

Jim Jeffrey, the US State Department’s special representative for Syrian engagement, said this week that the United States has “lots of evidence” that the Syrian regime is preparing to use chemical weapons in Idlib.

“I am very sure that we have very, very good grounds to be making these warnings,” Jeffrey said. “There is lots of evidence that chemical weapons are being prepared.”

Unsurprisingly, both the Assad regime and Russia have a different narrative.

Russian Foreign Minister Sergey Lavrov and his Syrian counterpart, Walid Muallem, believe that the rebels in Idlib are preparing to use chemical weapons in an attempt to provoke a Western response.

The United Nations, meanwhile, believes both the Assad regime as well as the rebels have the capabilities to produce chemical weapons.

“We all are aware that both the government and al-Nusra have the capability to produce weaponized chlorine,” UN Syria envoy Staffan de Mistura told reporters in Geneva.

Regardless of where the attack comes from nearly 3 million civilians’ lives are on the line.

In May 2017, Idlib was designated a “de-escalation” zone under an agreement between Turkey, Russia, and Iran. Idlib’s population has almost doubled to around three million as tens of thousands of Syrians trapped in other parts of the country were evacuated there under various ceasefire agreements with the Assad regime. Now there are few safe spaces to which they can flee.

“Idlib is like no other place because this was the place where people fled because it was safe. Russia, Turkey, and Iran said it was a de-escalation zone.” Jan Egeland, the head of the United Nations humanitarian task force for Syria, told NPR.

“President Bashar al-Assad of Syria must not recklessly attack Idlib Province. The Russians and Iranians would be making a grave humanitarian mistake to take part in this potential human tragedy. Hundreds of thousands of people could be killed. Don’t let that happen!” Trump tweeted on September 3.