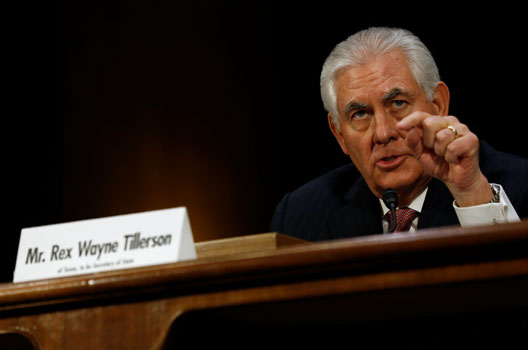 With the United States having emerged as an energy superpower, US President-elect Donald Trump’s decision to nominate the former chief executive officer of energy giant ExxonMobil, Rex Tillerson, as secretary of state is significant. Under Tillerson’s leadership, the State Department will have an opportunity to pursue a powerful energy diplomacy strategy.

In his confirmation hearing before the Senate Foreign Relations Committee on January 11, Tillerson sought to dispel some concerns over his ability to transform from a business leader accountable to his shareholders to a secretary of state accountable to the American people. He also sought to mitigate concerns regarding his views on Russia.

It was reassuring to hear that Tillerson agrees that Russia violated international law and the territorial integrity of Ukraine with its annexation of Crimea in March of 2014; that he would not recognize that annexation; that he supports the Magnitsky Act, lethal aid to Ukraine, the United States’ NATO allies, military reinforcements for Poland and the Baltic States, and maintaining sanctions against Russia.

However, like his cautious statements on human rights violations, he fell short of being explicit about Russia’s war crimes and Russian President Vladimir Putin’s role in the persecution and murder of political dissidents. His answers on whether ExxonMobil lobbied against sanctions on Russia were also muddled.

In Tillerson’s view, the Kremlin has “a geographic plan” and is “taking actions to implement that plan.” It would have been useful to hear more specifically from Tillerson his views on Russia’s geographic ambitions (presumably to reestablish control over the post-Soviet space) and how he would seek to address the challenge.

Tillerson could have also presented a more comprehensive vision of his policies vis-à-vis Russia and more explicitly recognized the significance of Russia’s comprehensive cyber and information warfare campaign against the United States and its allies.

Agnia Grigas is a nonresident senior fellow in the Atlantic Council’s Dinu Patriciu Eurasia Center and the author of The New Geopolitics of Natural Gas and Beyond Crimea: The New Russian Empire. Follow her @AgniaGrigas

Image: Rex Tillerson, the former chairman and chief executive officer of Exxon Mobil, testifies before a Senate Foreign Relations Committee confirmation hearing on his nomination to be US secretary of state in Washington, US. January 11, 2017. (Reuters/Jonathan Ernst)