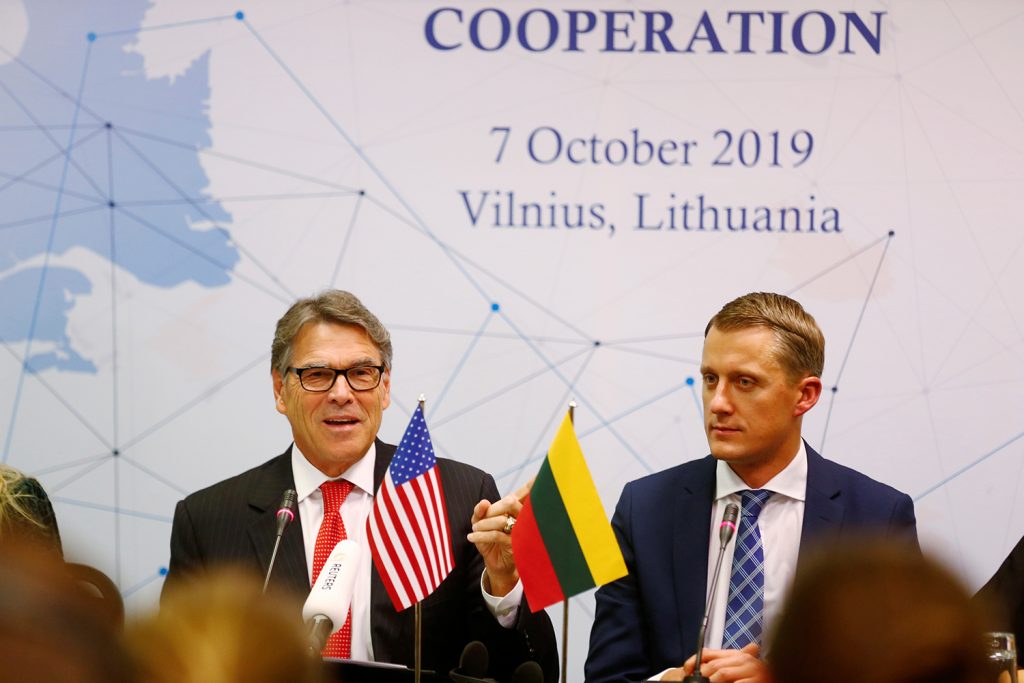 The Partnership for Transatlantic Energy Cooperation (P-TEC) advanced from framework to call to action at the second ministerial, in Vilnius, Lithuania, on October 6-7. US Secretary of Energy Rick Perry rolled out P-TEC in 2018 at the Three Seas Initiative Forum and Business Summit in Romania, and hosted the inaugural P-TEC Ministerial on the sidelines of CERAWeek in March 2019 in Houston. P-TEC and the Atlantic Council have a shared objective to enhance secure and resilient energy systems across Europe, and the Atlantic Council has been engaged in the initiative from the very beginning.

In addition, the P-TEC initiative complements regional efforts such as the Three Seas Initiative (3SI). Ian Brzezinski, senior fellow at the Atlantic Council, and one of the “founding fathers” of the 3SI, notes “P-TEC and the Three Seas Initiative are overlapping efforts with potential to significantly enhance energy security and resilience of Central Europe. Both feature an important transatlantic dimension that can expand and deepen the linkages between the economies of the United States and Central Europe.”

3SI was born out of the Atlantic Council’s “North South Corridor” project in 2014 and was led by General James Jones, co-chaired by Pawel Olechnowicz, and directed by Ian Brzezinski and David Koranyi. 3SI aims at stimulating more rapid development of the region stretching between the Baltic, Black, and Adriatic Seas across the transport, energy, and digital sectors. As Estonia surges ahead in planning to host the 2020 3SI Summit and Business Forum, a Baltic location for the second P-TEC Ministerial was a fitting choice. P-TEC also cooperates with the European Commission in Brussels: Ditte Juul Jørgensen, the new Director-General for Energy was also one of the keynote speakers at the second ministerial.

The second ministerial hosted by the US Department of Energy and the Republic of Lithuania was a significant step towards turning discussions into tangible solutions. Secretary Perry announced two vehicles to do so: the four ministerial working groups and the new initiative, E-TEAM.

Secretary Perry kicked off the second Ministerial on October 6 during dinner remarks: “Following our inaugural meeting in March in Houston, this week we will continue to focus on the partnership of twenty-three Central and Eastern European nations and the United States including the partnership’s practical implementation in the Baltic region, while strengthening energy cooperation between the United States and Baltic States. P-TEC will ensure positive outcomes for the Baltic States and other regional partners as well as result in improved transatlantic business opportunities.”

Europe Technical Expert Advisory Mission (E-TEAM) is designed to draw upon the expertise of Argonne National Laboratory and provide technical assistance to partners and allies under the framework of P-TEC. These experts can be dispatched upon request to conduct assessments of vulnerabilities in energy systems using existing models and tools deployed in the United States. The goal is to provide a snapshot for policy makers to make informed decisions about how to prioritize the protection of critical infrastructure.

Ambassador Richard Morningstar, founding chairman of the Atlantic Council Global Energy Center, who moderated a panel on critical infrastructure at the second ministerial notes that “P-TEC is significant because Central and Eastern Europe (CEE) energy security is a bipartisan issue and is a good example where parties can work together. CEE countries are some of our strongest allies.”

Global Energy Center Senior Fellow Ambassador Andras Simonyi facilitated a discussion on security of energy supply. Simonyi remarked that “P-TEC is a truly forward-looking project to engage the United States in CEE, which will enhance the transatlantic relationship in general and will benefit both: CEE and the United States.”

The working groups will create action plans based on their objectives. In the instance of the critical infrastructure working group, the action plan could include work on cybersecurity best practices, threat assessment, resilience enhancement, technical assistance on energy networks integration, and ways the United States could catalyze investment within those areas in CEE

Having advanced rather quickly, for a multinational initiative, P-TEC has tremendous potential to deepen transatlantic cooperation on pressing issues across the energy sector, especially in coordination with existing initiatives such as 3SI.