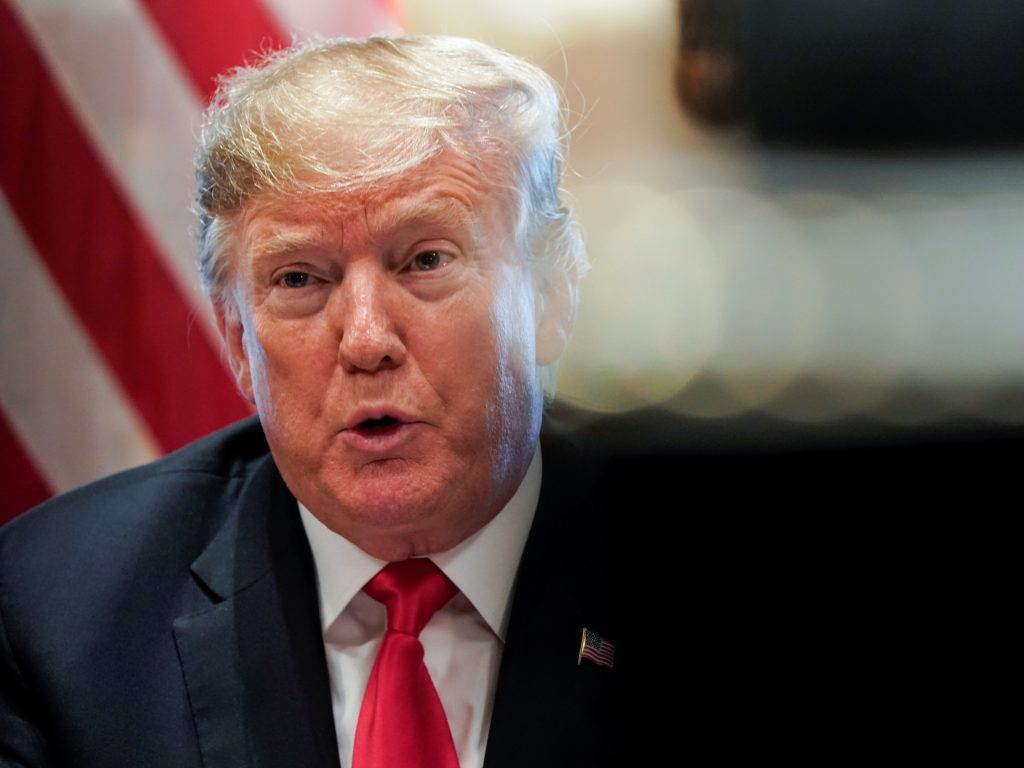 US President Donald Trump speaks while meeting with NATO Secretary General Jens Stoltenberg in the Cabinet Room at the White House in Washington, US, April 2, 2019. (REUTERS/Joshua Roberts)

US President Donald J. Trump’s flirtation with a purchase of Greenland got ugly on August 20 when he tweeted that he was putting off his planned state visit to Denmark because Danish Prime Minister Mette Frederiksen wouldn’t discuss the sale. The president triggered this blow up with an ally, a democracy that had sent troops to Afghanistan and Iraq in solidarity with the United States. That same day, the president again urged that Vladimir Putin’s Russia be brought back into the Group of Eight (G8), from which it was expelled in 2014 when it invaded and annexed territory of its neighbor Ukraine.

There are many levels of wrong with this, starting with the president’s arbitrary picking of a fight over something, a purchase of Greenland, that most Americans had considered a summertime whimsy. But it’s worse than peevishness or bullying; this episode reveals a dark vision of the national interest that, if implemented, will undo the grand strategy which, as the saying goes, made America great.

In the old days, meaning past centuries of European dynastic rivalries and colonial expansion, great powers bought, sold, and fought over territories the world over. The expanding United States did plenty of this as well, mostly on the North American continent but, starting at the end of the 19th century, overseas, seizing Hawaii, the Philippines, Puerto Rico, and other territories. These US colonial acquisitions weren’t much compared to the British, French, German, and later Japanese empires, but we were in the game. The underlying assumption was that national power required territorial control. Great powers planted the flag and grabbed what they could. The result brought both constant wars, because great powers were never satisfied with their share, and an international economy broken into closed-off zones.

But the United States soon developed a different, better idea about how to order the world.

Starting in 1918 with President Woodrow Wilson’s Fourteen Points, the United States started to champion a rules-based, undivided world. Free nations, not closed empires, would be its heart, working in concert to enforce peace. Trade would be subject to transparent rules. While then and later dismissed as idealism, the new US grand strategy rested on a higher self-interest: that the United States and Americans would prosper best in an open world, and so would everybody else.

Implemented by Presidents Franklin Roosevelt, Harry Truman, John F. Kennedy, and Ronald Reagan, this American Grand Strategy shaped the non-communist world after World War II and expanded its reach after the fall of the Soviet empire starting in 1989. The United States was inconsistent in applying its own principles (hypocrisy being one of the United States’ founding vices since the introduction of slavery in 1619). But the world that this American grand strategy brought forth—general great power peace and unparalleled prosperity—nevertheless looks awfully good compared to the world wars, global depression, colonialism, Nazism, and Communism that preceded it.

Offering to buy Greenland struck most Americans as backwards. And so it is. US interests in Greenland, at least as cited by those advocating the purchase, include access to mineral deposits, military security, and preemption of some ill-defined Chinese expansion. Fair enough. But these interests can be better secured by working within the alliance and open trade-and-investment system that has served us so well for generations. Worried about Chinese or Russian investment? Work with the European Union, Denmark, and Greenland to develop common standards for screening foreign investment on strategic grounds, including transparency rules. The United States already has such a system and the EU is putting one together. Need to expand the military presence? Try asking. Do US firms want to increase mining efforts? Greenland’s government has already made clear that it welcomes foreign investment.

But President Trump’s cancellation of his Denmark visit because the Danish government would not agree to consider a US territorial demand sounds mid-20th century, and not in a good way. It suggests, as some in the Trump administration have before, that alliances, common values, and rules are neither to be trusted nor respected; that old-fashioned sovereign control is the measure of national power, and that the sovereignty of smaller nations is of little importance. Ironically, one of the president’s other European stops coming up is to Warsaw, to mark the 80th anniversary of the outbreak of World War II, which started with a German attack on Poland after that country had, for good reason, refused a German territorial demand.

By tying the national interest to unilateral territorial demands, the US president puts himself in the same camp as Vladimir Putin. Putin’s strategy is also dismissive of international rules and the sovereignty of smaller nations, and appears to hold that only through force and intimidation can Russia advance its interests. The Kremlin has started wars with Georgia and Ukraine and reveled in its annexation of Ukraine’s Crimean territory. That’s the approach of a loser, who has little confidence in the natural attracting power of his country. That may make sense for Putin, who is running a stagnant, authoritarian kleptocracy with little appeal for its neighbors who have a choice. It shouldn’t be the American way.