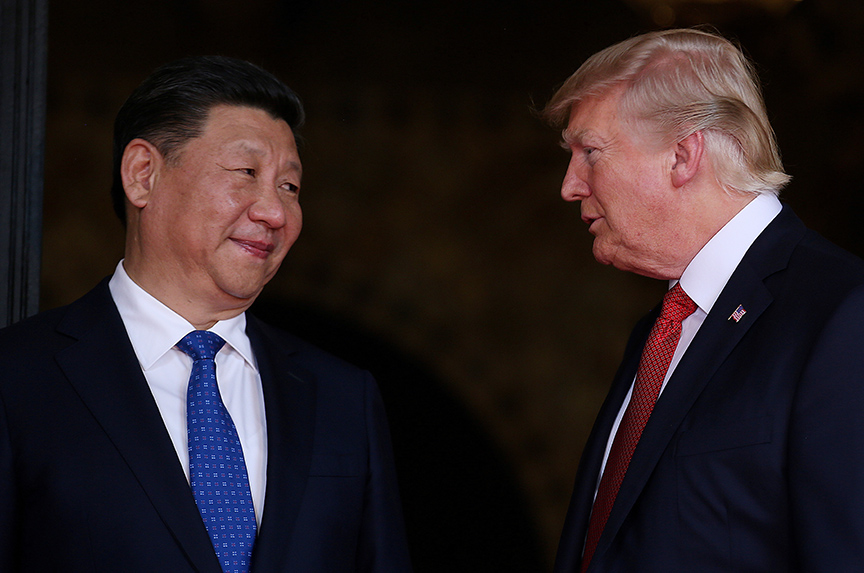 Attention Walmart shoppers: Those cheap electronics and apparel with “Made in China” tags on them will soon cost more.

US President Donald J. Trump on March 22 slapped $60 billion in tariffs on China, retaliating against its theft of technology and trade secrets.

The tariffs come at a particularly delicate time as the Trump administration requires China’s support for dealing with the North Korean nuclear crisis.

While most analysts agree with Trump’s assessment of the China problem, they also say that tariffs are unlikely to change Chinese business practices. The United States had a $375 billion trade deficit with China in 2017, nearly two-thirds of the total US global trade deficit. What would get China’s attention is reciprocity in terms of business practices.

Advocating for such reciprocity, Robert A. Manning, a senior fellow in the Atlantic Council’s Scowcroft Center for Strategy and Security, said: “If [Chinese e-commerce giant] Alibaba wanted to invest in the United States, I’m sorry, you need to have an American partner and Alibaba needs to give us their source codes.” Chinese firms that have stolen US intellectual property using such methods would be banned from investing in the United States and exports hit with tariffs.

US Trade Representative (USTR) Robert Lighthizer has been investigating China’s intellectual property practices under Section 301 of the Trade Act of 1974. His investigation has included looking at allegations that China violates US intellectual property rights by forcing US companies to form joint ventures with Chinese firms and transfer valuable technology to Beijing as the cost of doing business in China.

The US business community is put off by this cost. A survey by the American Chamber of Commerce in 2017 found that 80 percent of its members say foreign companies are less welcome in China. In the United States, on the other hand, Chinese companies have been on a buying spree, snapping up tech firms in Silicon Valley.

What Manning describes as China’s “mercantilist industrial policy” is best captured by its Made in China 2025 initiative, which identifies ten key sectors. There is a multibillion dollar investment fund dedicated to each, and China has restricted US investment in these sectors.

Jamie Metzl, a nonresident senior fellow in the Scowcroft Center, said it is no secret that China has for many years engaged in extremely unfair trade practices that have harmed the United States and its national interests.

“The words and actions of the Trump administration have massively undermined America’s role in the world, but standing up more strongly to China’s unfair trade practices and lack of commercial reciprocity is one area where this administration stands to be more effective than its predecessors,” Metzl said.

As for the tariffs announced on March 22, Manning said these are a “new tax on the American consumer that, ironically, diminishes the benefits of Trump’s biggest achievement so far—tax reform.”

US consumers, particularly in the middle class, will be hurt by tariffs on Chinese imports as the prices of goods such as electronics and apparel would likely go up.

“Today’s actions are a significant first step but they will only have meaning and impact if the Trump administration puts together a comprehensive strategy and brings other allies, particularly the European Union (EU), to its side,” said Metzl. “If America’s policy is standing up to China, now is the time to build closer relations, not pick fights with everybody else,” he added.

Metzl was referring to Trump’s tariffs on steel and aluminum imports, which will hurt and have been criticized by US friends and allies, including the European Union. Mexico and Canada—with whom the Trump administration is renegotiating the North American Free Trade Agreement (NAFTA)—have been exempted from these tariffs.

What’s that about a trade war?

Trump’s tariffs on China, coupled with the steel and aluminum imports, heighten the risk of a trade war that would look “pretty ugly,” said Manning.

Chinese officials have warned that they will retaliate with tariffs on US exports to China.  However, Chinese Premier Li Keqiang recently dismissed fears of a trade war, saying: “A trade war does no good to anyone. There is no winner.”

What could China do?

“The Chinese are very good at retaliating and very strategic about it,” said Manning.

China is one of the largest buyers of US crops, including soybeans and sorghum. Manning said China could cut these agricultural imports from districts that supported Trump. Such a move would be particularly painful for Republicans up for re-election in November.

China Southern Airlines also recently signed a $3.6 billion order for aircraft from Boeing. Manning said this order could easily be reversed if the Chinese decided to take their business to Boeing’s European rival, Airbus, instead.

Then there is what Manning refers to as the “nuclear option.”

As the largest creditor of the United States, China owns $1.2 trillion in US government bonds. The Chinese could pull out a couple of hundred billion dollars, which would destabilize the US markets, raise fears of inflation, increase interest rates, and create a sense of panic. “Trump would get the message, but I think this is the extreme-case scenario,” said Manning.

However, the Chinese government is likely be somewhat restrained in its response to the tariffs because of pressure from Chinese big tech firms. “Chinese big tech sees itself as a global multinational in the same league as Apple, Google, and Microsoft,” said Manning. “They want to do business in the United States and elsewhere, and if there is a trade war it is going to cost them.”

What can the United States do?

For the Trump administration, the most important response to unfair Chinese trade practices should be to reinforce the World Trade Organization (WTO)—where the United States is currently blocking the appointment of judges in an effort to force reform, said Manning.

Lighthizer told the US House of Representatives’ Ways and Means Committee on March 21 that the WTO “has proven to be wholly inadequate to deal with China’s version of a state-dominated economy that rejects market principles.”

The United States should also work with its economic allies, including the EU, Japan, and South Korea to avoid the risk of China playing one off the other, said Manning.

Manning said that the Trump administration could also take “subtle actions” such as barring Chinese students from studying science and engineering at US universities. “Almost their entire tech industry is driven by guys who went to Stanford or MIT,” said Manning. “There are things we can do, but it really needs to be more strategic,” he added.

Lighthizer told lawmakers that the USTR, under Trump’s direction, “is seeking to build a better, fairer system of global markets that will lead to higher living standards for Americans.”

Metzl noted that it was unfortunate that Trump pulled the United States out of the Trans-Pacific Partnership (TPP) trade agreement with Pacific Rim nations—which would have put the United States, and not China, in the driver’s seat when it comes to making trade rules of the road—and backed away from free trade more generally.

“Those principles and institutions would have significantly strengthened America’s hand in its dealing with China,” Metzl said, adding, “Nevertheless, there is still more this administration can and should do to protect America’s economic interests from China’s unfair trade practices.”

The Trump administration is not unique in its concern about Chinese business practices.

Days before Trump took office in January 2017, a White House advisory panel in former US President Barack Obama’s administration https://www.google.com/&referrer=https://www.google.com/” target=”_blank”>warned in a report that the United States must protect its semiconductor industry against a Chinese plan to dominate the sector.

That report noted that the “concerted push by China to reshape the market in its favor, using industrial policies backed by over one hundred billion dollars in government-directed funds, threatens the competitiveness of the US industry and the national and global benefits it brings.”

“We found that Chinese policies are distorting markets in ways that undermine innovation, subtract from US market share, and put US national security at risk,” it added.