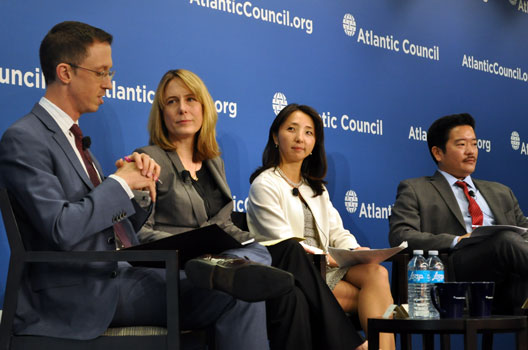 Exemplified by his extraordinary phone conversation with the leader of Taiwan and his tweets criticizing China, US President-elect Donald Trump’s undefined stance on Asia has created uncertainty and anxiety throughout the region.

On December 2, Trump spoke with Taiwan’s President Tsai Ing-wen, in what the Washington Post reported was “a breach of protocol that could disrupt US-China ties before the inauguration.” The call was the first by a US president-elect or president since Jimmy Carter switched diplomatic recognition from China to Taiwan in 1979. Since 1979, US-China relations have been governed by the “one-China” policy under which the United States acknowledges Beijing’s claim that Taiwan is part of China.

China issued a diplomatic protest in response to the Trump-Tsai call. However, Vice President-elect Mike Pence labelled the conversation a “courtesy call,” saying it was no different from Trump’s call with Chinese President Xi Jinping after the election. Trump subsequently posted a series of tweets criticizing Chinese monetary policy and aggression in the South China Sea, causing greater uncertainty as to the future of US relations with China.

Miller joined Russell Hsiao, executive director of the Global Taiwan Institute; Shihoko Goto, senior associate for Northeast Asia in the Asia Program at the Woodrow Wilson International Center for Scholars, at the Atlantic Council on December 2 to discuss strategic and current affairs surrounding cross-strait relations. David Wertime, senior editor at Foreign Policy, moderated the discussion. Jon M. Huntsman, Jr., chairman of the Atlantic Council and a former US ambassador to Singapore and China, introduced the event.

With regard to the future of US policy in Asia, “we must infer from the statements… made during the campaign and the transition process,” according to Hsiao. However, “we know very little,” he said. Miller added, “there are more unknowns than there are knowns.”

Goto described the current instability in the region, crediting the situation to sources such as China’s rise and North Korea’s aggression, and now the uncertain future of a US commitment to the region. However, she asked: “Can this growing list of uncertainties actually be an opportunity for change and can it provide new opportunities for growth?”

Hsiao described what he sees as four key strands of Trump’s foreign policy, based on what has been perceived thus far. Ultimately, he said, emphasis on greater burden-sharing with allies and partners, “emphasis on military strength in statecraft,” transactional foreign policy, and a China-centric approach to Asian affairs will define the new administration’s approach to US relations with its partners around the globe.

With regard to Taiwan, Hsiao said this stance could result in a greater willingness to allow Taiwan to acquire new advanced strategies that had been prohibited because Trump has been repeatedly critical of allies who do not “pay their share.” Hsiao contended Taiwan can manage an increased defense budget.

However, a transactional approach to foreign policy would minimize Taiwan’s strength as a democracy, according to Hsiao. Currently one of its strongest assets, democracy alone leaves Taiwan with less to offer in a system based more on bilateral relations than shared values, he said. However, this will “depend on how [Trump] defines American interests,” Hsiao added.

Emphasis on bilateral trade agreements, rather than multilateral institutions, bodes poorly for the future of the Trans-Pacific Partnership (TPP). Trump’s rejection of the free-trade agreement demonstrates, according to Hsiao, his focus on bringing jobs back to the United States rather than focusing on grand strategic considerations.

“TPP has been a proxy word for globalization,” said Goto, and this has been synonymous with job loss in the United States.

According to Hsiao, the probable failure of the TPP “doesn’t close the door for closer economic cooperation between Taiwan and the United States.”

However, “the future of trade agreements could actually be the first litmus test for how Japan and North Korea position themselves in the new region order,” said Goto. She described how Japanese Prime Minister Shinzo Abe made clear that the TPP, rather than being just a trade deal, is a strategic opportunity for Japan to bolster ties with the United States.

Abe was the first world leader to meet with Trump after the election, and he made clear that Japan remains committed to the TPP, both before and after that meeting.

Goto described the option of completing the TPP without the United States. However, she said, the new agreement would not be the TPP as it stands today. She said that “if TPP without the United States does move forward then Japan will be the single-biggest economy that will push it forward,” positioning Japan as a leader not only in Asia but on the world stage as Europe becomes increasingly insular.

Trump’s indication of a preference for bilateral trade agreements has raised questions as to whether security agreements will be forged on the same basis, said Miller.

Thus far, tensions in the South China Sea and Trump’s preoccupation with increasing naval capacity as a means to “maintaining preeminence,” leaves this issue in question. Hsiao said that without a US military presence, China will be more willing to be aggressive in the South China Sea. He described how in recent years there has been a de-emphasis of the military component of US foreign policy in Asia and a focus on trade. The new administration sees a necessary reevaluation of this policy to focus on security, he added.

Ultimately, according to Hsiao, “in this paradigm shift that appears to be taking place… there is going to be less emphasis on existing multilateral institutions,” rather, they will be “replaced with a series of transactional, bilateral agreements between powers in the region.” Hsiao said: “That will, in an ideal world, create a new equilibrium.” Though throughout the transition process, there will be a period of instability in which expectations will have to be reassessed, these reconsidered security arrangements have the potential to act as “new anchors for stability,” he added.

Additionally, there exists “an assumption among many constituencies in Southeast Asia that the new administration will have less of an emphasis on democracy promotion and human rights,” said Miller. She described how, in some corners, this is a welcome development. President Rodrigo Duterte of the Philippines delivered comments to this effect. However, with the Trump administration, Miller expressed a desire for the continuation of a “longstanding US commitment to religious freedom, religious tolerance, and religious diversity.”

She said that “the reasons for rebalance and focus on Southeast Asia in the Obama administration are compelling… it is my hope that they will be equally compelling to the new administration.”