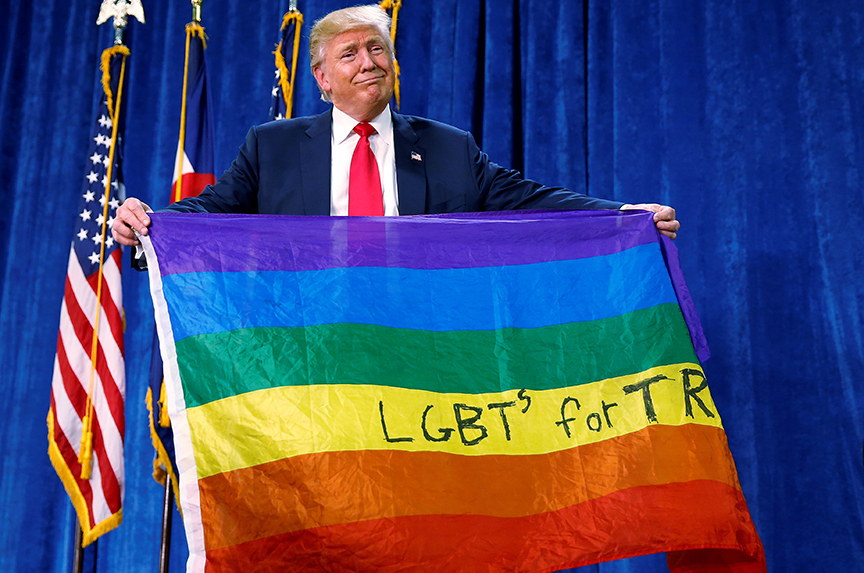 Over the course of the 2016 election, Donald Trump routinely flip-flopped on issues of equality for lesbian, gay, bisexual, and trans* Americans. After first saying he would consider appointing Supreme Court justices who would overturn nationwide marriage equality, he soon made it a recurring talking point to highlight how he would be “better for the gays” than his Democratic opponent, Hillary Clinton. This was mainly to bolster his extreme anti-Muslim stance on immigration after a shooting at a gay nightclub in Orlando last June left forty-nine people dead. The shooter, who had indeed pledged allegiance to the Islamic State, was in fact American-born.

LGBT Americans have good reason to be nervous about what the Trump administration means for the huge advances made under former US President Barack Obama. Trump’s inner circle is full of people who’ve made controversial and offensive statements. Vice President Mike Pence is a proponent of gay conversion therapy, which has been proven ineffective and leaves many young people psychologically damaged. A Pence spokesman denied the vice-president supports the discredited practice and told the New York Times that a past campaign statement had been misinterpreted.

Pence aside, people of color within the LGBT community have even more to fear, with high-profile white nationalists like Steve Bannon whispering in the president’s ear.

The situation for the international LGBT community, however, is more dangerous than the domestic one. Under Obama, human rights abuses were at least given lip service, and at best used as justification for granting asylum and imposing sanctions. So far, Trump has given gay rights advocates no reason to think that he’ll continue in the vein of his predecessor. Military intervention seems to be on the table, as in the case of Trump’s response to the use of chemical weapons on civilians in Syria, but by all indication he has no desire to grant asylum to refugees fleeing such attacks in the first place.

In Chechnya, human rights groups have reported that more than one hundred gay men were rounded up by police, some taken to concentration camps to be tortured and at least three murdered. A spokesman for Chechen leader Ramzan Kadyrov has denied the detentions, saying “You cannot arrest or repress people who just don’t exist in the republic.” He added that, “If such people existed in Chechnya, law enforcement would not have to worry about them since their own relatives would have sent them to where they could never return.”

The developments in Chechnya, a Muslim-majority Russian republic, are horrifying, but not wholly surprising. In the last few years, the Russian stance on homosexuality has degraded: in 2014, a law was passed criminalizing “gay propaganda,” a policy whose broad scope basically means acting gay is illegal. An uptick in hate crimes soon followed. Just recently, it became a criminal offense to show a Warhol-esque portrait of Russian President Vladimir Putin in drag.

US Secretary of State Rex Tillerson, who will travel to Russia on April 11, will get an opportunity to speak up for the LGBT community and prove to the world that human rights abuses will not be tolerated.

Trump has the opportunity every day to show LGBT+ Americans that they matter to him as much as other citizens, and that he will, indeed, be “better for the gays.”

It is vital that the president and his secretary of state seize these opportunities.

Image: On the campaign trail, Donald Trump made it a point to say how he would be “better for the gays.” As president, he now has the opportunity to make good on that promise. (Reuters/Carlo Allegri)