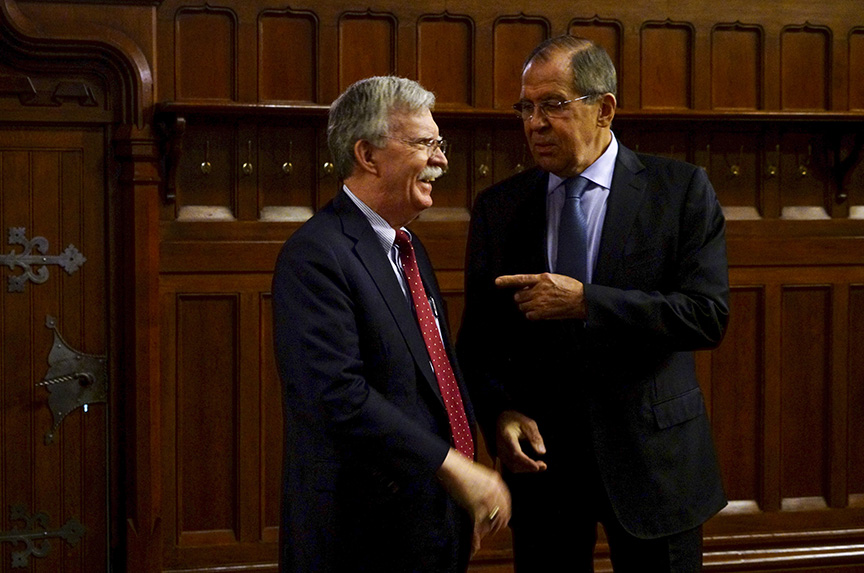 If there is one thing most arms control experts can agree on it is this: Russia has for many years been violating the Intermediate-Range Nuclear Forces (INF) Treaty.

Another thing they agree on: US President Donald J. Trump’s intention to walk away from the treaty signed by the United States and the Soviet Union in 1987 has created the impression that it is the United States that is at fault.

The Russians have “not only broken the INF Treaty, they have stomped all over it for well over a decade at least,” said Ellen O. Tauscher, a former US under secretary of State for arms control and international security.

“Something needs to be done, and it is important that the United States, on behalf of ourselves and our allies, especially our NATO allies, understand exactly how to get either Russia back in line or deal with the consequences of the Russian failure to adhere to this treaty,” she said.

At the same time, Tauscher, who spoke along with other former US officials in an Atlantic Council phone briefing on October 22, said she was “greatly disappointed” with the way Trump made and announced the decision.

“This has become the knee-jerk de facto Trump administration way of doing things,” said Tauscher. She believes two factors brought Trump to the decision: first, “it is the other guy’s treaty and not his” and second, US National Security Advisor John Bolton who “has never met a treaty that he liked, and certainly not an arms control treaty.”

Trump said on October 20: “We’re not going to let [Russia] violate a nuclear agreement and go out and do weapons, and we’re not allowed to.”

“If Russia is [developing weapons] and if China is doing it, and we’re adhering to the agreement, that’s unacceptable,” he added.

Russia said it would be “forced to take measures” if the United States ditched the treaty. “Russia is and has been devoted to the clauses of the agreement, and we think the intention of the US to withdraw is, of course, concerning because such steps, if taken, can make the world a more dangerous place,” said Kremlin spokesman Dimitry Peskov.

The Kremlin said Vladimir Putin would seek an explanation of the INF decision from Bolton, who is visiting Moscow and is expected to meet the Russian president on October 23.

In 1987, US President Ronald Reagan and Soviet leader Mikhail Gorbachev signed the INF Treaty. The treaty banned ground-launched medium-range missiles with a range of between 500 and 5,500 km (310-3,400 miles).

“Quitting the INF is a mistake,” Gorbachev said in response to Trump’s decision.

Franklin C. Miller, a principal at the Scowcroft Group and a former senior director for defense policy and strategy on the National Security Council, declared: “The INF Treaty is dead; it is dead because Russia killed it.”

Russia, Miller said, had taken a high-level decision in 2012 to have a covert program to “design, test, and now deploy battalions of a prohibited system.”

“To argue that [the INF Treaty] still exists is to believe in unicorns. Further, to argue that it still exists actually endangers arms control because if both sides don’t abide by a treaty, it’s called unilateral restraint, not arms control,” he said. “And that puts a shadow over any kind of agreement.”

Richard Burt, an Atlantic Council board member who played a key role in the completion of the INF Treaty, said “the problem we now confront is the way the Trump administration has handled this, the overwhelming view of people, not only in the United States and Russia but around the world, will be that it is the United States that killed this treaty.”

“The handling of this decision is simply God awful,” he said, calling the decision “impetuous” and “very poor issue management.”

Burt said that when seen in the context of the strains and stresses in the transatlantic alliance—Trump administration’s decisions to impose trade tariffs on its allies, and leave the Paris climate agreement, the Trans-Pacific Partnership (TPP), and the Iran nuclear deal—the INF decision “is going to be viewed as another sign of US unilateralism.”

German Foreign Minister Heiko Maas said the United States should consider the consequences of pulling out of the INF Treaty. “The treaty… has for thirty years been an important pillar of our European security architecture,” Maas said in a statement. “We have often urged Russia to address serious allegations that it is violating the agreement. We now urge the US to consider the possible consequences.”

The European Union said in a statement that besides urging Russia to abide by the INF Treaty the United States should “consider the consequences of its possible withdrawal from the INF on its own security, on the security of its allies and of the whole world.”

Jim Miller, who served as under secretary of defense for policy in Obama administration, said the lack of consultation with allies and unilateral action “reinforces that the US is now an unpredictable and an unreliable ally.”

However, not all allies balked at Trump’s decision.

British Defense Secretary Gavin Williamson told the Financial Times that the United Kingdom would be “absolutely resolute” with the United States “in hammering home a clear message that Russia needs to respect the treaty obligation that it signed.”

And NATO spokeswoman Oana Lungescu said that the Alliance has frequently expressed concern about Russia’s nuclear-capable 9M729 missile. “In the absence of any credible answer from Russia on this new missile, allies believe that the most plausible assessment would be that Russia is in violation of the INF Treaty,” she said.

While in office, former US President Barack Obama had argued that Russia was in violation of the INF Treaty.

In 2014, the Obama administration concluded that Russia had violated the INF Treaty by testing a prohibited ground-launched cruise missile. However, Obama was reluctant to pull the plug on the treaty largely in deference to European concerns that doing so would trigger an arms race.

In its Nuclear Posture Review, published earlier this year, the Trump administration concluded: “Russia’s increased reliance on nuclear capabilities to include coercive threats, nuclear modernization programs, refusal to negotiate any limits on its non-strategic nuclear forces, and its decision to violate the INF Treaty and other commitments all clearly indicate that Russia has rebuffed repeated US efforts to reduce the salience, role, and number of nuclear weapons.”

US officials and supporters of Trump’s decision say leaving the INF will allow the United States to counter Russia’s missile deployments aimed at Europe and respond to China’s buildup of intermediate-range nuclear-tipped missiles in the South China Sea.

Trump has been more explicit about this.

Trump said the United States would build up its arsenal “until people come to their senses.”

“It’s a threat to whoever you want to include China and it includes Russia and it includes anybody else that wants to play that game… [Russia has] not adhered to the spirit of that agreement or to the agreement itself,” he added.

While this has raised concerns about an arms race, Franklin C. Miller said: “There is an arms race in NATO Europe; it’s only Russia that is in it.”

Besides the INF decision, there are also doubts about the Trump administration’s enthusiasm to extend the New Strategic Arms Reduction Treaty (START) between the United States and Russia. This treaty, which limits the number of deployed, long-range, and strategic nuclear systems, needs to be extended by February 2021. A failure to extend will result in the expiration of the treaty.

“The rollout of [the INF] decision put the US in the position of being the one that has killed the treaty. That will be detrimental to our ability to sustain the New START treaty, which is even more in the interest of the US than the INF Treaty,” he said.

Jim Miller said it is more likely that the INF decision will make Russia more inclined to prepare for a breakout, which would make it challenging to keep New START in place.

Burt said: “The INF decision and failure to get into real discussions about extending New START has us sleepwalking into a new nuclear arms race.”

“This,” he added, “is going to have consequences for us and our allies that we haven’t thought through.”

“Without some sort of counterdeployment, Russia has no interest in abiding by what was called the INF Treaty,” said Franklin C. Miller.

“We need to present something to the Russian leadership that suggests that continuing violation of this treaty is simply not in their interests,” he added.

Burt contended that the Russian military never really liked the INF Treaty because Russia faces an array of existing and emerging nuclear powers in the eastern hemisphere. “They like this medium-range missile category,” which the INF Treaty restricts, he said.

“You have to hand it to the Russians for their deft handling of this that where the US is seen as pulling out of an agreement that they never liked to begin with,” said Burt. “That is a failure of American diplomacy.”

The Trump administration should make an effort to “get the story out that Russia has abrogated this treaty already and that we either need to respond or bring them back into compliance,” said retired Gen. Philip M. Breedlove, a former Supreme Allied Commander Europe.

“We need to take diplomatic action, informational action, military technical action, and economic action to… try to find a way to come back into compliance and make this treaty relevant and useful again,” he said.

At the very least, said Tauscher, “we have to work with our allies to make a decision about whether INF can be fixed.”

She added: “If it can’t be fixed, what do we do about it, how do we counter Russian aggression and how do we prevent the arms race from going forward?”