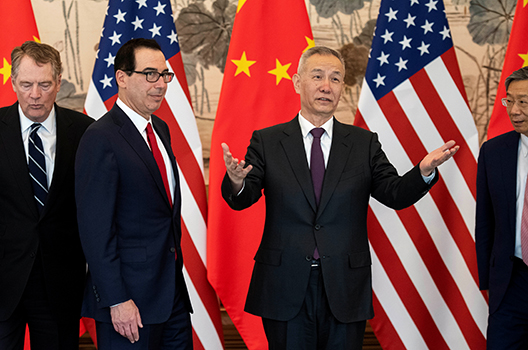 A strong economy and the support of his base have created the conditions necessary for US President Donald J. Trump to ratchet up pressure on China in trade talks, according to the Atlantic Council’s Bart Oosterveld.

The stock market’s “muted overall reaction to the threat of tariff escalation” and the fact “that the United States is performing exceptionally well on jobs and growth” have provided the administration “the economic leeway to take drastic measures against China,” said Oosterveld, who is the director of the Atlantic Council’s Global Business and Economics Program and C. Boyden Gray Fellow on Global Finance and Growth.

Trump also enjoys considerable support from his base on staying tough on China, Oosterveld said, a fact that is compounded by tacit approval from the US Congress. “While there may be disagreement on strategy and tactics,” Oosterveld said, “there is a broad bipartisan support for a tough stance on China on a range of topics, including trade.”

“The combined perceived economic and political benefits of continuing the trade war make it unlikely that Trump will back off anytime soon,” Oosterveld argued.

The Trump administration is set to enact new tariffs on Chinese goods after lengthy negotiations for a trade agreement collapsed last week. The Federal Register announced on May 8 that the United States will raise tariffs on $200 billion of Chinese goods from 10 percent to 25 percent, beginning on May 10.

China has promised to take “necessary countermeasures” if the US tariffs go into effect.

According to a report from Reuters, US-China trade talks hit a snag on May 3 when Chinese negotiators sent US officials “systematic edits to a nearly 150-page draft trade agreement” that both sides have been working on for months.

In a tweet on May 5, Trump suggested that the 10 percent tariff on China would be increased to 25 percent on May 10. He also floated the possibility that $325 billion of untaxed Chinese goods could be subject to new tariffs as well.

….of additional goods sent to us by China remain untaxed, but will be shortly, at a rate of 25%. The Tariffs paid to the USA have had little impact on product cost, mostly borne by China. The Trade Deal with China continues, but too slowly, as they attempt to renegotiate. No!

Three days later, on May 8, Trump tweeted that Chinese Vice Premier Liu He was leading a delegation to the United States “to make a deal.”

Oosterveld warned that “even if the two sides conclude an agreement this week, we should not expect the US administration to back down on its decision to raise the tariffs from 10 to 25 percent.” Trump’s threat to further increase tariffs, Oosterveld added, “is still a strong card on the table that we can expect to be raised again.”

….Guess what, that’s not going to happen! China has just informed us that they (Vice-Premier) are now coming to the U.S. to make a deal. We’ll see, but I am very happy with over $100 Billion a year in Tariffs filling U.S. coffers…great for U.S., not good for China!

Trump’s May 5 tweets suggest that he believes the tariffs have fed into the good economic conditions the United States has enjoyed over the last several months. The president tweeted: “these payments are partially responsible for our great economic results…the Tariffs paid to the USA have had little impact on product cost, mostly borne by China.”

The United States and European Union negotiators have been working on a new trade agreement since last July when European Commission President Jean-Claude Juncker agreed to begin negotiations if Trump backed off a threat to place new tariffs on cars and car parts.

Trump has suggested that these car tariffs could be put into place if significant progress is not made on a transatlantic trade deal. “The looming deadline for potential tariffs on cars and car parts by May 18 provides a similar opportunity for President Trump to escalate tensions on the transatlantic front.”

To make matters worse, the increased tariffs on Chinese goods could cause the US trade deficit with Europe to come back into the White House’s crosshairs. Kasperek noted that UN Conference on Trade and Development reports suggest that “exports from the EU may rise by as much as $71 billion over time once the tariffs on China come into effect on May 10.”

“President Trump is likely to see this as a justification to raise car tariffs in order to rebalance the deepening trade deficit this would create with the EU,” she added.

Going forward, Oosterveld argued that Trump is deploying both a short-term and long-term strategy. First, trying to “force the visiting Chinese delegation into further concessions or renegotiation of certain aspects of the draft [trade] agreement.” But then, should negotiations not be successful, he will “use the escalation in the trade war as critical to shifting supply chains and bring companies/jobs back to the United States,” which Trump views as critical to future electoral success, Oosterveld said.

“While no one wins in a trade war, exports out of the EU, Mexico, Japan, and Canada stand to gain from an escalation of US-China trade tensions,” Kasperek said. “The clear losers of any escalation will be the United States and China,” she added, especially as there appears to be no end in sight to the trade war.

Image: China's Vice Premier Liu He gestures next to US Treasury Secretary Steven Mnuchin and Yi Gang, governor of the People's Bank of China (PBC) as US Trade Representative Robert Lighthizer looks on as they pose for a group photo at Diaoyutai State Guesthouse in Beijing, China March 29, 2019. (Nicolas Asfouri/Pool via REUTERS)