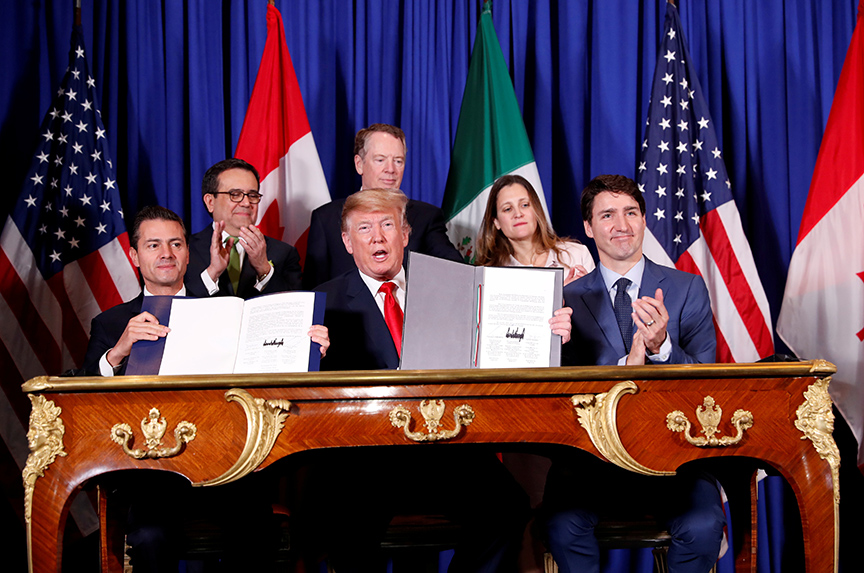 In 1994, when the North American Free Trade Agreement went into force, it intrinsically linked the economies of the United States, Mexico, and Canada; becoming the lynchpin of the North American economy and amplifying its competitiveness in the international market.

Trump called it a “truly groundbreaking achievement.” The USMCA must still be approved by the US Congress where Democrats will take control of the House of Representatives in January.

What is the USMCA?

How is the USMCA different from NAFTA?

Although many provisions remained the same there are several key changes and new provisions that distinguish the USMCA from NAFTA. The following are some of the biggest changes:

Agriculture: The USMCA includes a brand new agricultural biotechnology provision under Chapter 3 Article 10 which covers all biotechnologies, even new technologies such as gene editing, which can have real impact on not only food and agriculture, but human health as well.

Auto: Chapter 4 sees increased rules of origin requiring that 75 percent of auto content be made in North America, up from 62.5 percent in NAFTA. Further, 40-45 percent of this content must be made by workers who get paid at least $16 an hour. This is aimed directly at the Mexican auto industry considering that auto workers in the United States and Canada already earn this amount.

Dairy: Nestled under Chapter 3’s Canada-US Bilateral Annex, Canada has eliminated its controversial Class 6 and 7 under the protection of which it was dumping milk ingredients like protein concentrates (butter), skim milk, and whole milk powder on the world market.

Digital Technology: Chapter 19 on digital trade includes provisions ensuring the cross-border flows of data, including that of personal information and preventing the forced localization of data in Articles 8 and 12, respectively.

Dispute Settlement: Dispute settlement mechanisms focused on trade remedies such as anti-dumping and countervailing duties were left untouched, but the investor-state dispute mechanism will be phased out completely with Canada and significantly reduced (only remaining in certain key sectors such as oil and gas, infrastructure, and telecommunications) with Mexico under Chapter 14.

Labor: In NAFTA, the labor standards were not a part of the formal trade deal and were instead included in a side agreement called the North American Agreement on Labor Cooperation. They are now included in the body of the USMCA under Chapter 23.

There is no deadline for ratification of the deal. However, under Trade Promotion Authority, following the signing of the USMCA on November 30, a 105-day clock starts for the US International Trade Commission to complete and submit its report on the economic impacts of the deal to Congress. That report will be received no later than mid-March. Implementing legislation, once submitted, must first pass through House committee and then a full House vote before moving to the Senate.

The Trump administration also needs to send multiple documents to Congress including: the final text of the agreement; the Statement of Administrative Action, which details changes to US law; and the draft implementing bill, which is the legislation Congress will actually vote on. If minor changes are still being made this will slow its progression to ratification.

To add to this already long timeline, the most major foreseeable delay revolves around provisions on labor. Republican lawmakers have spoken out against Chapter 23’s provisions around employment discrimination on the basis of sex, while House Democrats have indicated that they want stronger, more enforceable labor standards.

In the meantime, NAFTA is still in place, barring any action from Trump. North American investment certainty depends on moving this agreement forward, increasing pressure on Congress to vote in favor of ratification of the new agreement.