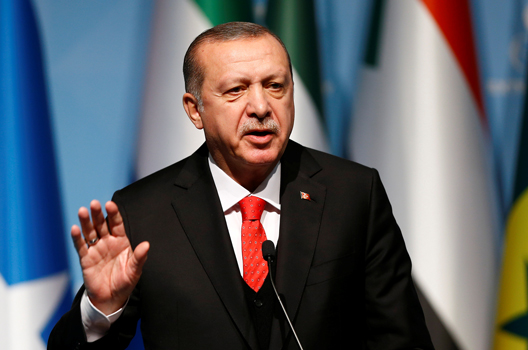 In 2017 Turkey has made tremendous strides in the development of its renewable energy sector, notably the allocation of over two billion dollars for the production of wind and solar energy. These sources of funding, or tenders, are part of Ankara’s ambitious plans for the future of renewables, outlined and set forth in the context of its 2023 goals—a holistic set of economic growth targets to commemorate the Republic of Turkey’s centennial.

To analyze Turkey’s plans for increasing its renewable energy sources, it is necessary to understand its motives in the context of the larger energy strategy. Ankara primarily aims to achieve greater energy independence and security and decrease the economic burden of energy imports which make up around half of Turkey’s total trade deficit. The increased sustainability and environmental benefits of using renewable resources are secondary bonuses.

These motives have informed the strides the country has already taken toward increased renewable energy production. Historically a country heavily reliant on oil and gas imports for its energy needs, Turkey has embarked on a strategy of aggressively developing its domestic resources. In addition to renewable energy, Turkey’s plans include increased production of nuclear energy and coal. Turkey is currently constructing its first nuclear power plant with two more planned. Meanwhile, Turkey’s plans to develop coal power lag behind only that of China and India.

Ankara’s push for an expansion of renewable energy has taken two giant steps forward in 2017, with two wind and solar tenders each exceeding one billion dollars. In August 2017, a consortium composed of Siemens and Turkish companies Kalyon and Türkerler beat seven other bidders to win a billion dollar wind power project to construct and implement 1,000 megawatts (MW) in wind projects in five different regions across Turkey, with an emphasis on the west coast.. This megaproject alone will increase Turkey’s wind energy production by 17 percent when completed in 2019. Turkey held a solar energy tender for $1.3 billion in March, which was awarded to a joint venture of South Korean Hanhwa Q Cells and Kalyon, who will construct a 1,000 MW solar power plant in the central province of Konya.

These two megaprojects fall under the Renewable Energy Resource Area regulations (YEKA in Turkish), drafted by the Renewable Energy General Directorate of the Ministry of Energy and adopted into law in October 2016. The regulations aim to use renewable energy resource sites more effectively and efficiently, opening new land for renewable generation and streamlining the tendering process, thus enabling large-scale megaprojects in contrast to the small capacity projects previously undertaken. The scale of these projects will better position Ankara to reach its 2023 goals.

The result of the latest wind power tender, which came after thirty auction rounds, provides a 3.48 cents/kilowatt hour (kWh) feed-in tariff for the energy produced. This is one of the lowest prices for wind energy in the world among countries offering a similar model of renewable production, including Morocco, Peru, Mexico, and Egypt. The price indicates a drastic reduction from Turkey’s previous tariff of 10.3 cents/kWh, offering Turkey significant energy cost savings and demonstrating the competitiveness and potential of the country’s wind power sector, which will only encourage further investment. The price reduction was caused not only by the new regulatory framework, but also by the sheer magnitude of the tender, which dwarfed previous wind offers in Turkey, allowing the companies to capitalize on economies of scale.

Renewable energy in Turkey has grown dramatically in recent years as a result of increasing government incentives, new regulations, and the global dissemination of competitive technology. Excluding hydro power, renewables’ portion of electricity production in Turkey has risen from 0.3 percent at the turn of the century to around 8 percent today—and it continues to rise. This is all the more impressive considering Turkey’s overall electricity production has more than doubled in the same time frame. However, despite these gains, Turkey’s 78,497.4 MW of electricity production continues to be dominated by coal, natural gas, and hydropower at 33.9 percent, 32.1 percent, and 24.7 percent respectively.

As part of its centennial strategy, Turkey aims to generate 30 percent of its electricity from renewables (excluding hydro) by 2023. However, the feasibility of this goal is questionable; its achievement would require reaching a level of renewable generation that is 3.5 times higher than the present level in just six years. The most ambitious targets set forth in the strategy focus on the production of wind and solar energy. Wind production, now around 5 GW is targeted to quadruple to 20 GW. Solar energy, which contributes less than 1 percent to Turkey’s production today, is targeted to rise tenfold to 5 GW.

Turkey’s renewable energy sector presents both opportunities and challenges. Due to its natural resources, the country offers exceptional potential, particularly in the solar and geothermal sectors. Turkey has the second largest solar energy potential in Europe, second only to Spain, with an average of 7.2 sunshine hours per day. Further, it has the highest geothermal potential in Europe, seventh largest in the world.

The biggest challenge Turkey faces is finding the financing to deliver the potential projects by 2023. Estimates indicate that $60 billion of capital is needed to achieve the goals set forth in the strategy. Thus, it is critical that Turkey include foreign companies in megaprojects as it has on the two previously mentioned, not only to gain technological know-how, but to share the financial burden. Several of the largest renewable energy companies in the world participated in Turkey’s two large tenders in 2017, and their continued interest will be key to Ankara’s success moving forward. To overcome these issues, Turkey needs to continue offering a secure investment environment and incentives, extend the use of smart grids, and further liberalize the electricity market.

Renewable energy also offers a promising avenue for cooperation with the European Union (EU). Despite political tensions, energy remains an area in which Turkish and EU interests and challenges largely overlap as both parties face the same restrictions imposed by limited domestic fossil fuel resources. As the most vocal supporter of the global push to achieving the goals set forth in the Paris climate accord, the EU has a vested interest in supporting Turkey’s renewable energy development. Expanding and deepening the support provided by international financial institutions to Turkey’s renewable energy sector would be a good step. For example, the European Bank for Reconstruction and Development (EBRD) has a current portfolio of around 1 billion euro invested in energy projects in Turkey, of which the vast majority focus on renewables. This is a large amount, but composes only 15 percent of the EBRD’s overall Turkey portfolio.

Increasing the use of renewables in electricity would also support Turkey’s longstanding goal of creating a natural gas hub within its borders by freeing up more natural gas it plans to import for export. Turkey has long aspired to act as a bridge for natural-gas-producing countries in the Middle East and import-dependent countries in Europe.  This would also contribute to energy security in the region, most notably Southeastern Europe, as well as Turkey, by providing a new, independent source to compete with the region’s dominant supplier.

Ultimately, while Turkey has yet to achieve its goals, the two tenders constitute important steps that demonstrate the foreign and domestic interest in Turkey’s renewable energy sector. Should Turkey overcome the technological and financial challenges and develop its renewable resources as envisioned, the prize will be greater energy diversification, independence, and sustainability.