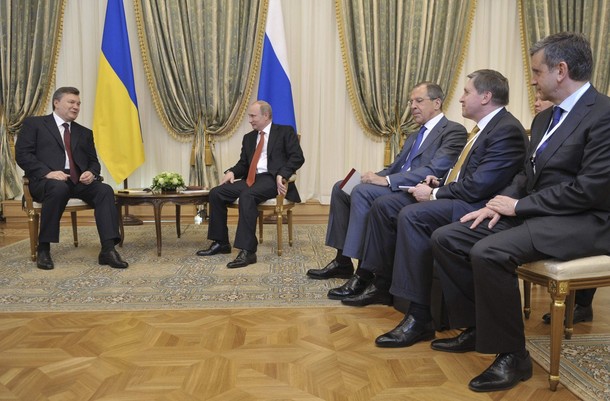 Ukraine’s leaders remain convinced they will be treated by the West like Russia, whose human rights violations are largely ignored. In reality, Ukraine is being treated like Belarus, whose human rights situation is scrutinized and regularly condemned.

In a speech to Germany’s lower house of parliament, Chancellor Angela Merkel said, “Today we are living in peace and freedom in Germany, and in the European Union, but sadly not in the whole of Europe: for in Ukraine, and in Belarus, people are still suffering under dictatorship and repression.”

As then-President Leonid Kuchma explained in his 2003 book Ukraine is not Russia, Ukraine does not have three strategic assets possessed by Russia – a seat on the UN Security Council, nuclear weapons, and energy resources. President Putin’s crimes against humanity in Chechnya were tolerated by the international community while Serbian President Slobodan Milošević’s crimes against humanity in Kosovo, Bosnia-Herzegovina, and Croatia were prosecuted in The Hague.

Kyiv continues to misunderstand this simple fact of geopolitics. Speaking on condition of anonymity, a Ukrainian foreign ministry official responded to Merkel by saying: “we see selective application of democratic standards towards Ukraine. Because according to all respected international ratings, there is quite a number of nations in Europe and other parts of the world where democracy evidently meets much more serious challenges than in Ukraine.”

The first factor is disinterest. Former US Ambassador to Ukraine Steven Pifer has pointed out how Ukraine is a low priority for both the US and EU, who have far bigger domestic and international problems on their agendas.

The second factor is a home goal. Ukraine has brought upon itself virulent Western criticism because it has sought EU and (until 2010) NATO membership. Therefore, in seeking to integrate into Euro-Atlantic institutions, which require it abide by European values, Ukraine is inevitably treated more harshly than Russia and Belarus who have not sought to become part of the Euro-Atlantic community.

A third factor is over-self-importance. Ukrainian leaders have an exaggerated sense of their country’s geopolitical importance and use this to threaten to re-orientate their country from Europe and integrate with Russia and the CIS. Nataliya Prykhodko writes that the Ukrainian authorities repeatedly warn, “By its actions, the EU is pushing Yanukovych into Putin’s embrace, and if Europe does not close its eyes to the Tymoshenko case and sign the association agreement with Kyiv, Ukraine will be forced into economic and political union with Russia.”   Polish Foreign Minister Radek Sikorski warned Ukraine’s leaders: ‘When raising the stakes you can over-estimate the strength of your own cards.”

A fourth factor is Germany, the dominant country in the EU, with whom it is vital to have good relations if one desires European integration. Yet, Ukraine-German relations have deteriorated under President Yanukovych.

First, in July 2010, only six months after Yanukovych was elected and a month before he was to visit Germany, Nico Lange, director of the Konrad Adenaeuer stiftung in Kyiv, was detained for twelve hours in Kyiv’s Borispil airport on the personal orders of then-Security Service (SBU) Chairman Valeriy Khoroshkovsky. The trumped up charges against Lange included falsification of visa rules, illegal financing of political parties, and espionage. Merkel and the German Ambassador to Ukraine were forced to intervene to free him from detention.

Second, growing human rights problems in Ukraine have given enlargement sceptics such as Germany, which has always been cool towards the Eastern Partnership, the ammunition to attack Ukraine as unable to meet political demands in the association agreement.

Third, Yanukovych  twice broke personal promises to Merkel to ensure reforms were taken to decriminalize two 1962 Soviet articles used to imprison Yulia Tymoshenko. When the opposition put forward decriminalization of the two articles, the Party of Regions voted on both occasions against the reforms. Merkel grew up in Communist GDR and this may be a good explanation of why she understands Yanukovych. Her communist upbringing undoubtedly gives her a better insight into Yanukovych’s Homo Sovietcus mind-set than politicians who grew up in democratic Western Europe.

Fourth, Tymoshenko, imprisoned for seven years in October 2011, is leader of the Batkivshchina party that is a member of the European Peoples Party (EPP) which includes Merkel’s German Christian Democrats. The EPP understandably defends Tymoshenko as one of their own.

The West’s treatment of Ukraine like Belarus, not Russia, may lead to consequences for Yanukovych. Western boycotts of Yanukovych have already begun and, as noted in my January post “Time for the EU to End Double Standards on Corruption,”  visa blacklists and sanctions could follow after the October parliamentary elections.