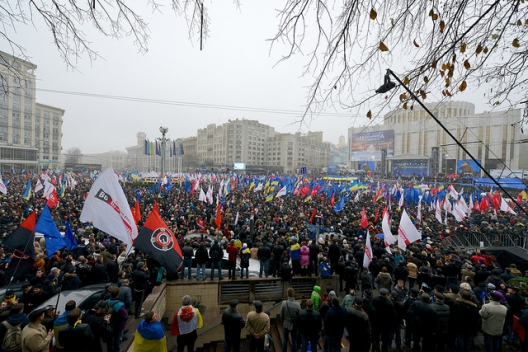 Last Thursday’s government decision to cancel plans to seek an Association Agreement with the EU at the Vilnius summit of the Eastern Partnership, which starts tomorrow, has sparked a mass protest by one hundred thousand people in Kyiv that bring back memories of the Orange Revolution nine years ago. The EU had turned up the pressure ahead of Vilnius, and the US Senate on November 18 adopted a harshly worded resolution. By then, it was clear that the EU would not sign if former Prime Minister Yulia Tymoshenko was not released from jail.

The decision should not come as a surprise as the Ukrainian authorities never negotiated in good faith for the release of Tymoshenko and ignored previous EU and US condemnations of “selective use of justice” by Yanukovych. Soon after Tymoshenko was defeated by only three percent in the 2010 presidential elections and the victorious Yanukovych came to power, a range of criminal charges was instituted against Tymoshenko and her allies. She was imprisoned in October 2011 for seven years and three years ban from public office. The intent was no doubt to make sure that she would not pose a threat to Yanukovych in 2015 when he will run for reelection.

Nevertheless, the “Tymoshenko problem” continues to haunt Yanukovych. Announcing her intention to go on hunger strike in solidarity with protestor she called upon Ukrainians to “peacefully and constitutionally wipe Yanukovych regime off the face of the earth.” In an open letter published last Friday she wrote, “Frankly speaking, yesterday after the government decision to deny singing of the association agreement I wanted to kill you. I think 70 per cent of people felt the same way.”

Ukraine is in a severe political crisis similar to that in the three years leading up to the Orange Revolution although with two major differences. The first is that a decade ago Ukraine’s economy was rapidly growing—there was 12 percent growth in 2004—while today the country is in recession and there is a severe financial crisis. The second is that, unlike in 2004, the chances of a peaceful outcome to today’s crisis are more unlikely.

There are five factors behind Yanukovych’s cancellation of negotiations with the EU, including   an absence of European values, selective use of justice as central to authoritarian consolidation, an unwillingness to pardon Tymoshenko, fractured EU diplomatic policy, and weak economic and financial incentives provided for Ukraine.

Firstly, Yanukovych is not ideologically committed to European integration in the manner of eastern European and Baltic leaders who desired to escape their communist past and Russian hegemony. Yanukovych’s “bottom line” was always how integration would benefit or damage his personal interests. As the well-known investigative journalist Serhiy Leshchenko explained, “Association with Europe was never Viktor Yanukovych’s dream. Values in the European sense of that term for Europeans do not mean anything for him unless they can be converted into a Honka private airplane and landing strip with gold trims.”

President Yanukovych lives in a palatial Mezhyhirya mansion, a former Soviet palace that was privatized by his 2006-2007 government, has become a symbol of rampant corruption as it is way beyond his government salary. The grounds, which include a massive hunting preserve, tennis courts, sauna and a fake Spanish galleon, has been described  as “a nightmarish amalgam of nouveau riche kitsch, late Ottoman excess, Disneyland vulgarity, and Donald Trump tastelessness.”

Secondly, as Serhiy Kudelia writes, the imprisonment of Tymoshenko had two purposes, to remove a political threat and to send a signal to other Ukrainian elites about who was now “boss.” In other words, Tymoshenko’s imprisonment plays the same role as that of Mikhail Khodorkovsky for Russian elites and their imprisonments have aided the consolidation of authoritarian regimes in both countries.

Thirdly, Yanukovych, therefore, never negotiated in good faith for a compromise over Tymoshenko. Although he was willing to let her travel to Germany for medical treatment, he never had an intention to pardon her. Only two weeks before the Vilnius summit a new criminal charge was unveiled against her alleging she had deposited $500 million in Swiss bank accounts in the 1990s when she was allied with Prime Minister Pavlo Lazarenko (who was imprisoned in the US from 2006 to 2012 on money-laundering charges) and dubbed the “gas princess.” But, this is not unusual for Ukrainian and Eurasian elites who spend as much time in Monaco, London, and Vienna as they do in Ukraine. Cyprus, a favorite offshore zone for Ukrainian oligarchs, is Ukraine’s largest foreign investor.

A criminal charge was also unveiled against Tymoshenko’s lawyer Serhiy Vlasenko, who had already been stripped of his parliamentary seat, alleging he had beaten his former wife. Meanwhile, changes to legislation aimed to prevent another opposition leader, international boxing champion Vitaliy Klitschko, from standing as a candidate in 2015 because he had allegedly lived abroad in Germany for a long period of time and did not possess residency requirements of having lived for ten years in Ukraine prior to the election to be a candidate. In the last few days Klitschko’s email accounts have been hacked, probably by the Security Service of Ukraine, and his private photos and correspondence were put on a clone website of Ukrayinska Pravda. An airplane carrying Klitschko, whose poll ratings give him a 15 percent lead over Yanukovych, was prevented from landing in Kyiv on the first day of protests (November 24) in order to stop him addressing the massive crowds.

Fourthly, EU officials and member states kept changing the “deadline” for the signing the Association Agreement. Poland’s Foreign Minister Radoslaw Sikorski only a few weeks before Vilnius said the deadline could be extended into 2014 while the Polish President Bronislaw Komorowski said the Association Agreement could be signed in Vilnius and the benchmarks be implemented the following year. After the government’s decision Stefan Fule, the EU commissioner in charge of EU enlargement and neighborhood policies, said signing could be postponed until next spring. Such confusing and mixed signals undermined the EU’s credibility as a negotiating partner and reinforced Yanukovych’s view that the EU was bluffing on human rights.

Finally, Yanukovych blamed the EU for not offering sufficient financial compensation to cover economic losses from Russian blockades that have been introduced since September on Ukrainian goods exported to Russia in violation of World Trade Organization (WTO) rules.  Eastern Partnership countries such as Ukraine are expected to undertake half to two thirds of the political, legal, economic and energy reforms required for prospective members with the EU offering limited assistance and no inducement of full membership compared to that offered to prospective members in southern and eastern Europe. Meanwhile, Ukraine would only feel the benefits in the medium to long terms.

At the same time, Ukrainian leaders always knew that the initial investment costs would be high while they should have expected a tough reaction from Russia such as trade blockades; after all Russian President Vladimir Putin is not known for being subtle in his handling of relations with his neighbors. Russian leaders have also threatened that Ukraine could split if European integration went ahead pointing to high support for membership of the Commonwealth of Independent States (CIS) Customs Union in Russian-speaking eastern Ukraine.

In the final analysis power and money trumped European values. In 2015 Ukrainian voters will have the ability to reaffirm their country’s European future by voting out President Yanukovych. The likelihood of free elections being held, however, are remote because he is not contemplating giving up power as that would lead to Tymoshenko’s release and possible criminal charges being served against him for abuse of office and political persecution of his opponents. Yanukovych’s two choices are therefore both unpalatable: either to “Lukashenize” Ukraine by moving from a semi to a full authoritarian regime where elections have no meaning or to hold free elections and lose them.

Taras Kuzio is a nonresident fellow at the Center for Transatlantic Relations, School of Advanced International Studies, Johns Hopkins University, Washington, DC, and is a Toronto-based research associate at the Centre for Political and Regional Studies, Canadian Institute of Ukrainian Studies, University of Alberta. The views expressed are his own.