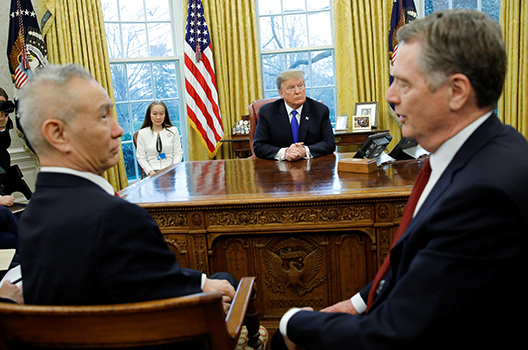 The Trump administration has suspended, until further notice, a scheduled tariff increase—from 10 percent to 25 percent on $200 billion of Chinese imports—citing progress in trade negotiations between Washington and Beijing. Reportedly, talks have focused on six areas: forced technology transfer and cyber theft, intellectual property rights, services (in particular financial services), currency manipulation, agriculture, and non-tariff trade barriers. If successfully concluded, these provisions will form a new binding trade agreement between the United States and China, but one that will not be subject to congressional approval, as negotiations were undertaken in the context of addressing China’s unfair trading practices referred to in US President Donald J. Trump’s order to impose tariffs by invoking Section 301 of the Trade Act of 1974. Trump has set high expectations, wanting to hold a “signing summit” with Chinese President Xi Jinping at his Mar-a-Largo resort by the end of March. Despite the apparent momentum in the talks, it is unclear that the negotiations will remove all of the trade barriers and economic grievances between both sides.

According to congressional testimony by US Trade Representative Robert Lighthizer, the administration’s emphasis in the negotiations is less on how much China pledges to buy from the United States in the future (“don’t go for the soybean solution”) but more on enforceability—concrete measures to hold China accountable if it does not fundamentally change its unfair trading practices. It is difficult to see China agreeing to “fundamental changes” in essential features of its economic and political system and development plans, such as the use of state-owned enterprises or gutting the “Made in China in 2025” plan. If the United States insists on strict enforceability in these areas, talks could still fail, despite all the positive signals.

Alternatively, both sides could agree on a process of monthly, semiannual, and annual meetings at escalating levels of political seniority to review progress in implementing the agreement, with the United States likely to retain its unilateral power to impose tariffs if needed. In this context, the existing 10 percent tariff is unlikely to be lifted, despite being demanded by China—the United States views this tariff as a key incentive that prompted China to negotiate seriously in the first place.

While concluding a trade agreement would lessen the threat of tariffs as a source of uncertainty and friction in US-China trade relations—at least for the near future—non-tariff barriers such as export controls and heightened investment screening loom large in their potentially disruptive impact on trade, investment, and the smooth operation of global supply chains. More importantly, these non-tariff barriers will be more difficult to remove and thus can become ongoing sources of tension between the two countries.

Following the passage of ECRA, the Commerce Department has tasked the Bureau for Industry and Security (BIS) with writing the implementation rules and updating the Entity List, which will identify entities including businesses and research institutions with which US persons need to obtain specific BIS licenses to deal in technologies subject to export control. The rules will specify which countries (such as China) and categories of goods essential to US national security can be subject to enhanced export controls. For goods, there will be two classes of export control: on “emerging technologies” (such as those specified in “Made in China 2025” priorities) and on “foundational technologies” (probably focusing on semi-conductors, which are key components for more advanced technologies, including artificial intelligence). Depending on how extensive such rules and the Entity List will be, they can be disruptive to trade in technological goods as well as to the listed entities dependent on such goods in their operations—for example, as in the case of the temporary ban on US companies dealing with the Chinese telecom company ZTE in 2018.

Pursuant to FIRRMA 2018, the US Treasury Department has expanded the scope of transactions subject to review by the Committee for Foreign Investment in the United States (CFIUS) to include certain non-controlling investments in US businesses involved in critical technologies related to specific industries. These include, among others, aerospace/defense, nuclear power, petrochemical manufacturing, telecommunications, battery manufacturing, nanotechnology, biotechnology, and semi-conductors. While CFIUS has long had authority to review transactions in which a foreign person could gain control of a US business, now it has a mandate to review transactions which afford a foreign investor access to any material non-public technical information of the US business. As a result, CFIUS caseload will increase by several orders of magnitude and investments from countries such as China in specified industries will be much more difficult.

Sanctions and their enforcement

In addition to the tariff and non-tariff trade barriers, US sanctions and secondary sanctions (against foreign entities violating the primary sanctions) have become an important irritant to trade relations. A case in point is the thirteen-item indictment filed by the US Department of Justice in New York City against Chinese telecom giant Huawei for violations of sanctions on Iran and the request for Canada to arrest and extradite Huawei’s Chief Financial Officer Meng Wanzhou to the United States. China has naturally protested strongly against the United States and Canada over the incident. Since the legal process of indicting Huawei and requesting extradition of Meng have gone this far, it is difficult to see how Trump could use the release of Meng as a bargaining chip in trying to get a deal with China—as mentioned in his tweets. Given the tendency of the United States to use economic and financial sanctions as preferred tools to achieve national strategic goals, this and potentially other sanction violation cases in the future will likely keep tensions high between the United States and China.

Overall, it is important to put US-China trade relations in a larger perspective. As seen in US Vice President Mike Pence’s speech at the Hudson Institute on October 4, as well as the US National Security Strategy released in December 2017, Washington’s assessment of its relationship with China has changed from being cooperative and competitive commercially to being competitive geopolitically and increasingly antagonistic. In this context, trade and trade measures such as tariffs and non-tariff barriers will be used more and more in the service of national security. US-China relations, not only in trade but in other areas, will likely be filled with tension. This has become the new normal.