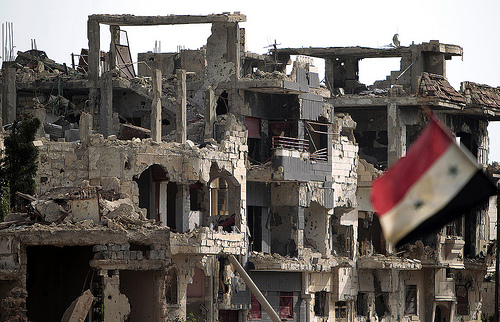 Syria’s savage civil war may have just entered a new and darker phase. During the past few weeks, momentum has shifted sharply away from the rebels in favor of the Syrian dictator Bashar Assad. The real possibility that his government, long presumed to be on life support, may now survive is bad news for rebel forces and the millions of Syrians who have suffered at the hands of a brutal regime. It is also a wake-up call for the United States, Israel, Saudi Arabia, and Europe, which could all end up the big losers in this Middle East power play.

Assad’s dramatic turnaround has been facilitated by an unholy trinity of Hezbollah, Iran, and Russia. Hezbollah has entered the war in a big way by sending large groups of fighters to help the Syrian army push back rebel militia groups, particularly along the border with Lebanon. During the last few weeks, Hezbollah made a key difference in the bitter battle for Al Qusayr, near the strategic city of Homs.

Iran has also doubled down on support for Assad by resupplying his forces with advanced armaments. Russia confirmed late last week that it intends to send Assad powerful and sophisticated S-300 missiles. If made operational in a few months, they could be a strategic game-changer and an immediate threat to Israel. Their deployment may also be a Russian shot across the US bow — a warning to not even think about the possible use of American air power against Assad’s resurgent and capable military.

These key Hezbollah, Iranian, and Russian reinforcements mean Assad will not only live to fight another day but could possibly even prevail over the divided and disputatious rebels — a surprising rebirth for a leader who most presumed was finished two years ago when Syria’s Sunni majority rose up against him.

The only country with the power and resources to stop Assad now is the United States. Washington has a lot to think about and a lot is at stake. One reason to act is to help the several million Syrian refugees who have lost their homes and hope and are on the run as the great powers bicker at the United Nations. Another is to prevent a wider regional war that could draw in Lebanon, Jordan, Iraq, and Turkey. Washington also realizes a victory for Iran and Hezbollah would be a long-term setback for the United States and Israel in the battle for power and influence in a changing Middle East.

Despite President Obama’s understandable reluctance to dive into yet another Middle East quagmire, there may be no alternative. Secretary of State John Kerry’s recent diplomatic whirlwind put the United States back in the game. By bringing the Syrian opposition and government together in Geneva next week to consider a transition in power, Kerry is calling Assad’s bluff and Russia’s too. If, by some miracle, the warring Syrian parties manage to agree, it would open the shortest route to end the war. If it fails, as most expect, the world will point to Syrian and Russian hypocrisy as the major reason why.

In this event, the United States and Europe could then counter by shifting support to the rebels. The European Union has already lifted its arms embargo, and Britain and France are prepared to supply the rebels with weaponry. The EU has supported rebel-held areas economically. The United States should do the same.

The Obama team could help to put Assad on the defensive by arming selected rebel groups and directing US air power to strike at Assad’s key military bases in retaliation for his use of chemical weapons.

The stakes are just too high for the United States to sit on the sidelines. If the Geneva talks fail, Washington should shift to a strategy to weaken and defeat the Iran-Hezbollah axis, drive Assad from power, and deal with the inevitable mess that will be left in his wake. With support from John McCain and other Republicans, Obama might even forge a rare bipartisan consensus to preserve US strength in the region. As is so often the case around the world, the most difficult crises can only be overcome by strong, principled, and aggressive American leadership. It may be Syria’s only hope.

Nicholas Burns is professor of the practice of diplomacy and international politics at the Harvard Kennedy School of Government, and Atlantic Council Board director. He is faculty chair of the school’s Middle East Initiative, India & South Asia Program, and is director of the Future of Diplomacy Project. He served in the United States Foreign Service for 27 years until his retirement in April 2008. Follow him on Twitter @RNicholasBurns. This piece first appeared on the Boston Globe.