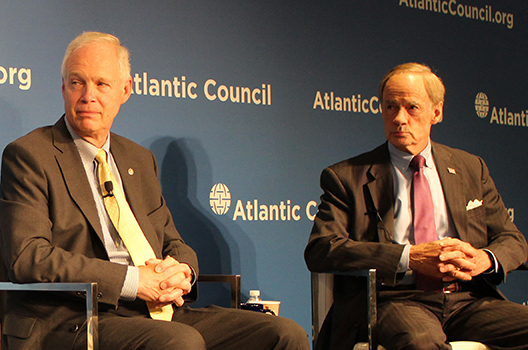 The migrant flow from Central America to the United States is a serious problem that needs to be addressed, but cannot be solved through the use of tariffs, two US senators said at the Atlantic Council on June 12.

On May 30, US President Donald J. Trump threatened to impose a 5 percent tariff on all Mexican goods by June 10 unless the Mexican government did more to help prevent migrants from reaching the US border. He further warned that this tariff would be increased by five percentage points each month until satisfactory progress was made. On June 7, Trump announced that a deal had been struck with the Mexican government that saw the tariff threat dropped, although it could be reinstated if the there is a “problem.”

US Sen. Ron Johnson (R-WI) told the Atlantic Council that he “understand[s] [the president’s] frustration. But I don’t necessarily understand the administration’s worldview when it comes to the trade wars and tariffs.”

Johnson argued that the current number of migrants reaching the United States’ southern border and attempting to cross illegally “is an out-of-control situation… [and] is exactly what President Trump was trying to and has been trying to solve. But the president has not been getting much help from Mexico and he certainly has been getting no help from the United States Congress whatsoever.”

The Mexican government has reportedly promised to deploy its national guard to the Guatemalan border, arrest more migrants in Mexico, and handle more busloads of asylum applicants who have been turned away from the United States. “The Mexicans have been asked for a while to do a better job with their border with Guatemala,” US Sen. Tom Carper (D-DE) explained but added that he thought “they have been responsive to do that.”

While both Carper and Johnson sympathized with the problem facing the Trump administration, they criticized the heavy toll tariffs—or even the threat of tariffs—place on US consumers and producers. “Tariffs are a tax paid by consumers on the country imposing them and increases our cost of consumption,” Johnson explained.

“Businesses want certainty,” Carper added, but the continued specter of potential tariffs means that “right now they don’t have it and they need it.”

In addition to hurting US consumers and businesses, both senators argued that hurting the Mexican economy would actually be counterproductive to controlling immigration. Johnson explained that the large number of economic migrants from Mexico seen a decade ago has largely stopped because “Mexico has a vibrant economy… It is in America’s best interest that Mexico’s economy is strong.” Carper agreed, saying “people have found that they have good economic opportunity to stay right where they are.”

Rather than tariff threats on Mexico, Carper said more focus needs to be placed on the conditions within Honduras, Guatemala, and El Salvador, where most of the migrants are fleeing economic plight, drought, crime, and violence. Carper lamented the situations in Guatemala and Honduras, specifically. “In Honduras, we don’t even have an ambassador,” he said, while presidential elections in Guatemala on June 16 feature “no good candidates” and a former anti-corruption attorney general, Thelma Aldana, has been prevented from returning to the country to campaign.

In March, the Trump administration announced that it was cutting off all direct assistance to El Salvador, Honduras, and Guatemala—the so-called Northern Triangle countries. “We’re not paying them anymore because they haven’t done a thing for us,” Trump told journalists at the time.

The State Department said in a statement: “At the secretary’s instruction, we are carrying out the president’s direction and ending FY 2017 and FY 2018 foreign assistance programs for the Northern Triangle. We will be engaging Congress as part of this process.”

Carper suggested the United States and Mexico put more resources toward thwarting the “coyotes”—organized crime members who illicitly offer transportation and assistance to migrants in exchange for money. Most of these “coyotes” have been empowered over the years by “our insatiable demand for drugs,” Johnson explained. To curb the ability of violent organized crime to both cause and profit from this illegal migration, the United States needs “a long-term effort” involving regional partners such as Mexico and tangible legislation from the US Congress, he argued.

The Trump administration’s threat against Mexico is just the latest use of tariffs to attempt to leverage better trade deals or concessions from third countries. In early 2018, the United States placed tariffs on aluminum and steel on Canada and Mexico in order to pressure them into negotiations to revise the North American Free Trade Agreement, which resulted in a revised version known as the United States-Mexico-Canada Trade Agreement currently awaiting ratification. The United States has also placed tariffs on the European Union and China in order to achieve more favorable trade outcomes.

“I understand using tariffs as leverage to get a better deal,” Johnson said, but he stressed that tariffs could force US-based producers “to move their manufacturing for international customers overseas. We are starting to see that at least contemplated.”

Jaime Castaneda, senior vice president for policy strategy and international trade at the National Milk Producers Federation, explained that in the dairy industry “just the threat of not having [open trade with] Mexico certainly had a repercussion in producers’ prices and producers’ income.”

Beth Hughes, senior director for international affairs with the International Dairy Foods Association, agreed pointing out that tariffs on goods coming from Mexico could not just increase prices for consumers, but also for producers as “most of what [the dairy industry] import[s] from Mexico are ingredients” that go into US-made dairy products.

This interconnection between the US and Mexican economies is also present in the automotive industry, which has been particularly hurt by the aluminum and steel tariffs. Warning about the effect should the Trump administration return to its threat of tariffs on all Mexican goods, Jeff Beck, director of federal government affairs for the Auto Alliance, said that “a five percentage point tariff would be absolutely devastating for the automotive supply chain. Auto parts actually go across the border several times in many cases before they actually get put into a completed vehicle. The impact of these tariffs would actually be multiplied for the auto industry.”

Maria Zieba, director of international affairs at the National Pork Producers Council, reported that the tariffs placed on US pork in retaliation for the 2018 tariffs caused a “$1.5 billion loss just last year alone” for the US pork industry. “We have been bearing the brunt of the retaliatory tit-for-tat between the two countries,” she added.

“The economic fates of the United States, Canada, and Mexico are intertwined,” Jason Marczak, director of the Atlantic Council’s Adrienne Arsht Latin America Center, explained. He further warned that “by making products from Mexico more expensive and less competitive, we open the door for products from other countries outside North America—China, for example.”

Johnson said that the uncertainty around the tariffs needs to end and that he “can’t wait for this administration to wrap up these trade deals” around the world so that businesses can stop worrying about new tariffs. He argued that it was “well past time that Congress start returning and retaining [its] constitutional authority” on tariffs that has been given to the executive branch since the 1930s.

“We averted an unprecedented economic crisis with our number one trading partner,” Marczak said, but the threat of tariffs still looms and could cause much more pain for US consumers and producers if the administration turns to them again to improve its negotiating position.