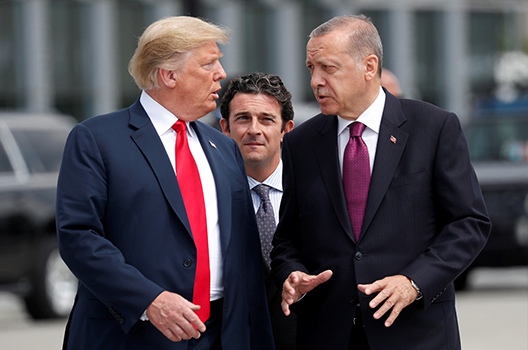 There was a time when Turkish people mourned together with the people of the United States, such as when John F.  Kennedy was killed, or when they fought shoulder to shoulder together during the Korean War. How did such a great alliance turn into a cold shoulder?

The historically strong US-Turkey relationship has been tested in recent years by a seemingly never-ending series of disagreements and crises. After each development, commentators claim again and again that US-Turkey relations have never been so bad. Each point of conflict seems to make relations that much worse and the recent sanctions on two Turkish ministers have initiated a new wave of such claims. So far, relations have remained resilient and a meeting on August 3 between Secretary of State Mike Pompeo and Turkish Foreign Minister Mevlüt Cavuşoğlu is a testament to the two NATO allies’ ability to maintain dialogue despite increasing tensions.

The roots of the current disagreements between the United States and Turkey began during the final years of the Obama administration. First came the US decision to support the Syrian-Kurdish People’s Protections Units (YPG), a militia with close ties to the Kurdistan Workers’ Party (PKK), a designated terrorist organization by Turkey and the United States, as well as the European Union.

Turkey makes no distinction between the two groups and has repeatedly decried the strategy of using one terrorist organization, the PKK, to fight another, ISIS. For the United States, the need to find an effective ground force with which to combat ISIS overrode any other concerns. Tensions between the United States and Turkey over Syria climaxed in January 2018, as Turkey invaded the Afrin canton in northwestern Syria to remove the YPG. The United States worried that the fight between Turkey and the YPG would distract from the fight against ISIS. Efforts to de-escalate tensions over Syria culminated in a June 2018 agreement brokered between US Secretary of State Mike Pompeo and Turkish Foreign Minister Mevlüt Çavuşoğlu to peacefully push the YPG out of Manbij in northern Syria.

While tensions over Syria have unfolded over the course of several years, a number of other issues have emerged recently. The coup attempt on July 15, 2016 in Turkey added further acrimony in the US-Turkey relationship. The United States was criticized in Turkey first for not immediately condemning the coup attempt and then, more seriously, over the fact that the alleged mastermind of the coup, Fethullah Gülen, has been living in the United States in self-imposed exile since 1999. Many in Turkey suspected the US government of complicity in the coup attempt. The perceived obstinacy on the part of the United States against the extradition, further increased Turkish suspicions and anti-American rhetoric, leading to greater lack of trust and understanding.

The election of Donald Trump in November 2016 was heralded by many in Turkey as an opportunity to reset US-Turkish relations. Despite establishing a closer rapport with the Turkish President Recep Tayyip Erdoğan, Trump did little to change the Obama-era policies that led to the current predicament.

Fresh tensions again flared in the fall of 2017 over an Iran sanctions judicial case involving Turkey in the district court of New York. Reza Zarrab, a Turkish-Iranian businessman, was alleged to have helped the Turkish state-owned bank Halkbank evade US sanctions on Iran by facilitating payment for Iranian oil and gas with gold. Zarrab was arrested after traveling to the United States for vacation in March 2016. Before the trial began, Zarrab flipped to become the state’s witness and offered to testify against Mehmet Hakan Atilla, a deputy general manager of Halkbank.  Zarrab had previously been a central figure in a 2014 graft scandal, allegedly fabricated by Gulenist-affiliated prosecutors, in Turkey involving high-level figures in the Turkish government. Turkish authorities viewed the case as another Gulenist attempt to attack the Turkish government. Tensions over Iran will likely soon be back on the agenda as American sanctions on Iran have snapped back.

Amidst a time of growing problems between the United States and Turkey, Turkish-Russian relations, following a rapprochement in the summer of 2016, have been quickly warming. Turkey and Russia have made agreements to cooperate on Syria, including through the Astana process in 2017, construct a new gas pipeline to Turkey, and supply Turkey with the Russian S-400 missile defense system. The last agreement became a sticking point for the United States, who was not pleased by the prospect of advanced Russian military hardware in a NATO ally for several reasons.

First, the system would not be interoperable with NATO defense systems, creating a weak spot in NATO defenses. Second, the United States is worried about the potential for the systems to collect information on NATO’s next generation fighter jet, the F-35. Turkey argues the system is necessary to protect its airspace and notes that Turkey originally approached the United States to procure the Patriot missile defense system and only turned to Russia when it could not seal a deal. It also notes that Greece earlier procured the previous generation of Russia’s missile defense system, the S-300, to not nearly the same level of uproar.

The F-35 itself has become deeply entwined with the S-400 deal. The S-400 was one of the leading reasons for the inclusion of a provision in the National Defense Authorization Act (NDAA), recently passed by Congress, prohibiting the delivery of F-35s to Turkey until after the Pentagon produces a report to analyze the effects of removing Turkey from the joint production agreement. Turkey has criticized the bill and vowed to take the case to international arbitration if they don’t receive the jets, noting that they have already contributed billions of dollars to its development and production.

After the coup, as Turkey cracked down on alleged perpetrators and suspicion and mistrust in the United States reached its height, Turkey detained and arrested American citizens and Turkish nationals working in US consulates in Turkey over alleged links to the Gülen movement and PKK. The arrest of consulate workers in the winter and fall of 2017 led Washington to restrict most visas to the United States, a move immediately reciprocated by Turkey. The visa crisis was resolved in less than three months, at the end of 2017. Now attention is focused on the arrest of a pastor who has lived in Turkey for twenty years, named Andrew Brunson. Brunson and the United States have rejected the terrorism charges as baseless and called on Turkey to release him, but the Turkish government, citing judicial independence, says it cannot intervene.

Brunson’s continued detention kicked off arguably the most serious conflict in US-Turkey relations, after threats from President Trump and Vice President Mike Pence to impose sanctions on Turkey over Brunson turned into reality on August 1. The Treasury Department announced sanctions on Turkish Interior Minister Süleyman Soylu and Justice Minister Abdulhamit Gül for their alleged roles in the arrest and continued detention of Brunson.

Turkey’s Foreign Ministry announced its determination to not bend to US pressure and suggested it would quickly implement its own sanctions in response. Secretary of State Mike Pompeo held a meeting with his counterpart Mevlüt Cavuşoğlu on August 3 on the sidelines of an ASEAN meeting for a discussion undoubtedly dominated by sanctions. Indeed, Turkish President Erdoğan announced the freezing of assets of the US Attorney General and US Secretary of the Interior in Turkey, while also saying that the channels of diplomacy are working intensely. Even though it was a mostly symbolic move, Erdoğan showed that Turkey is not willing to back down.

While all this was happening, NATO’s Supreme Allied Commander Europe and the Commander of the United States European Command, General Curtis Michael Scaparrotti visited Ankara on August 1 to meet with Turkish Chief of General Staff, General Yasar Guler, to discuss cooperation in Syria and Iraq.

In every crisis there exists an opportunity. The imposition of sanctions has brought a new level of urgency and awareness on both sides, which could paradoxically make it easier for the United States and Turkey to reach a breakthrough. The ongoing diplomatic dialogue is a very encouraging and necessary starting point. Ultimately, the only way for the two countries to return to truly healthy and productive relations is to overcome the mutual distrust and lack of understanding built over the years. It is time for both sides to acknowledge mutual mistakes and work towards building mutual trust and a true partnership, which both parties need.

Defne Arslan is the Director of the Atlantic Council IN TURKEY

Pinar Dost is the Deputy Director, Atlantic Council IN TURKEY

Grady Wilson is a program assistant, Atlantic Council IN TURKEY