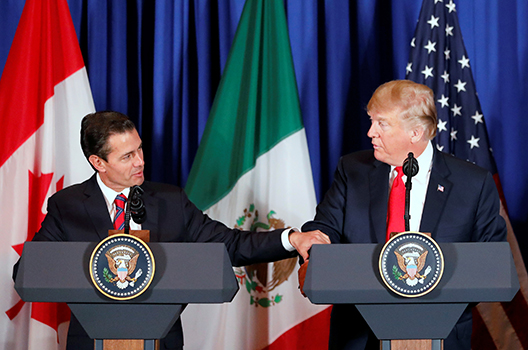 Congressional Democrats and the US Trade Representative (USTR) are inching toward agreement on key elements of the US-Mexico-Canada Trade Agreement (USMCA) to replace the North American Free Trade Agreement (NAFTA). The Trump administration is aiming to achieve Congressional approval of the new trade agreement during September or October, when it still may be possible to get it through the Democrat-controlled House of Representatives before 2020 electioneering is in full swing.

Stakeholders in the vast North American marketplace, and the Trump administration, stress the benefits of the modernized USMCA, including in such areas as internet commerce and data protection, which could start boosting the economy in 2019, rather than waiting for ratification until after the 2020 US presidential election. But supporters also privately stress that approving USMCA now will bring critical stability and predictability for the continental commercial network that supports some 12 million US jobs, with what are currently the United States’ two biggest trading partners—Mexico and Canada. These advocates cite the disruption generated by tariffs and tariff threats over the past two years, and express worry that more damage could be done unless USMCA is set up to stabilize the partnership. Farmer groups in particular hope that the new agreement will help solidify exports to what have traditionally been two of three largest foreign markets for US farmers, especially as demand from China is threatened by a continuing trade war with Beijing.

USMCA will provide stability at a time when uncertainty is a top threat to US growth and investor confidence. While much of the concern has to do with China, the approval of USMCA would show investors and other countries in Europe and Asia that the United States is serious about solving trade issues in a way that does not hinder growth.

The Road to Passage

A number of barriers need to be overcome to “get to yes” on USMCA, however. These include a busy fall US legislative schedule filled with contentious battles over spending caps, appropriations bills, and lifting the debt ceiling. Press reports suggest that some Democrats are already worried that a vote on USMCA could divide the party and hand a victory to US President Donald J. Trump, on top of the objections many Democrats still have about the agreement itself.

US Speaker of the House Nancy Pelosi has spoken of the need for “surgical” adjustments to the USMCA and has designated a group of House members to explore changes with US Trade Representative Robert Lighthizer on labor rights, enforcement provisions (including dispute resolution), intellectual property rights for biologic drugs, and the environment. Initial exchanges have been positive. While President Trump is still calling for Congressional action immediately, it appears that after an internal debate, the  administration is willing to keep working with the Democrats for a potential vote in the fall.

The Democrats have yet to agree on the specific changes they seek to ensure that Mexico will implement the agreement’s labor commitments. They specifically demand that the United States be able to take effective action to enforce the strong labor rights requirements in the USMCA. Mexico recently passed a major labor reform law, which should meet USMCA standards and the Mexican government has shared its plans for implementing these reforms with the US Congress.

Although Mexico’s Senate has already approved USMCA, Mexican officials say that they are willing to find ways to make the mechanisms for resolving disputes under USMCA more effective, if that can help alleviate Democrats’ concerns about being able to enforce the agreement. This would address concerns that dispute settlement panels can be too easily blocked under the current USMCA text. A delegation of House members is reportedly traveling to Mexico to explore their concerns directly with Mexican officials.

Outside of their concern about Mexican standards, congressional Democrats also seek changes in the draft agreement to reduce the current time period for intellectual property protection for biologic drugs from the current ten years, in order to speed reductions in drug prices.

Canada, USMCA’s third party, is letting the United States and Mexico sort out their differences and is waiting to see if the US Congress will ratify the agreement. Canada’s parliament has not approved the deal, while parliamentary elections are slated for October 21.

Why the USMCA is Needed

In private conversations, many economic stakeholders are rooting for the Democrats and USTR to reach a compromise on USMCA to help prevent further disruptions to the “$1 million a minute” trade between the United States and Mexico. While NAFTA would likely remain in place if Congress does not endorse USMCA, a new USMCA could dissuade Trump and Mexican President Andres Manuel Lopez Obrador (AMLO) from taking steps that undermine the massive US-Mexico commercial relationship.

Many privately cite Trump’s threats in recent months to impose tariffs on Mexican imports over migration flows from Central America (and drug smuggling) as the type of actions they hope approving USMCA will inhibit. Business leaders point out that the ups and downs of the US-Mexico economic relationship over the past two years have been very disruptive for business planning and investment. Some experts are urging Congress to insert language in the implementing legislation as they approve USMCA that would put new limits on the US president’s ability to impose such tariffs without Congress.

Having USMCA fully in place would also give investors added certainty around market protections, as AMLO moves to implement his promised historic “fourth transformation” in Mexico through  social, economic, governance, and political reforms. Pundits and business leaders have been alarmed by a series of moves by the AMLO administration that they worry will undermine Mexico’s economy and business environment. The surprise July 9 resignation of Mexico’s respected finance minister Carlos Urzua is the latest example, as Urzua cited conflicts of interest, unqualified senior officials, and decisions not based on data or good analysis among his reasons for resigning: all red flags for the private sector. The resignation followed alarming government threats the week before to take international gas pipeline companies to international arbitration over existing legal contracts.

Approving USMCA would not eliminate trade tensions or all of the problems between the United States and Mexico, but it will provide a valuable institutional framework to manage them and protect this vital relationship as it continues to flourish.

Earl Anthony Wayne is a non-resident senior fellow at the Atlantic Council and a global fellow and co-chair of the Mexico Institute Advisory Council at the Woodrow Wilson Center.  He served as the US ambassador to Mexico and assistant secretary of State for economic and business affairs.