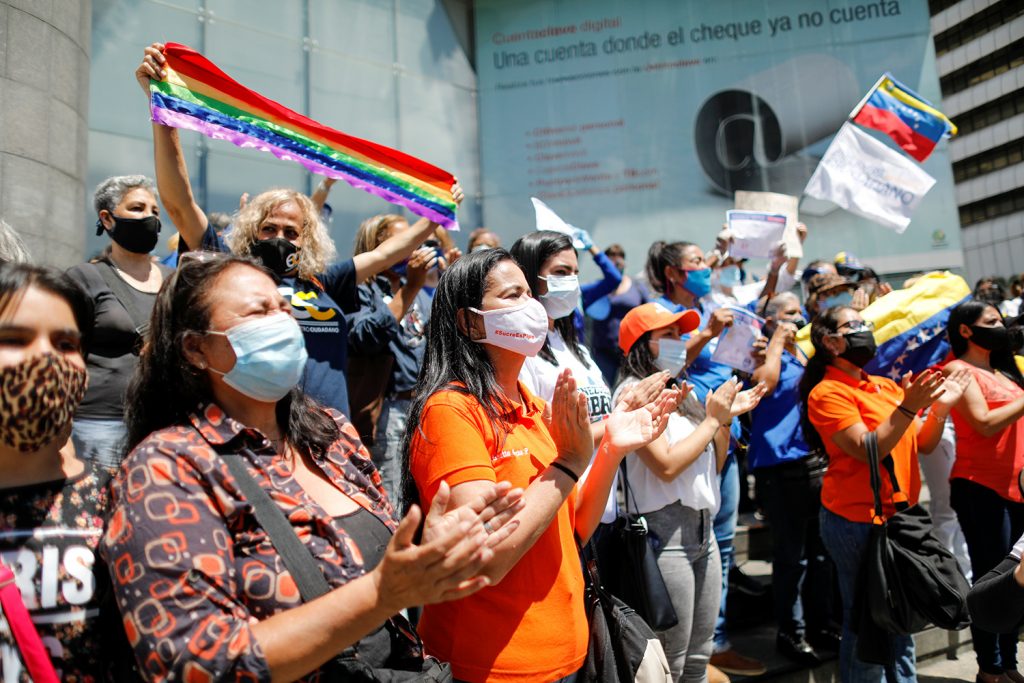 Civil-society organizations, including those led by women, are increasingly being targeted by Nicolás Maduro’s regime in Venezuela. Arbitrary detentions and human-rights violations have become commonplace. Undeterred by an environment of censorship, persecution, torture, and extrajudicial killings, women across all sectors—including politics, health, and journalism—are speaking out.

Including women and women’s civil-society groups in peacebuilding efforts is essential to strengthening and advancing a more inclusive and diverse—and, ultimately, successful—approach to rebuilding Venezuela’s democratic institutions. It is thus critical that the international community hold the Maduro regime accountable for its crackdown, which violates the United Nations (UN) Universal Declaration of Human Rights. The international community should also direct more financial and technical resources toward Venezuelan civil society to ensure that women can continue to play an active role in peacebuilding efforts in the country.

According to UN High Commissioner for Human Rights Michelle Bachelet, groups exercising their right to peacefully assemble play an important role in “mobilizing the population, permitting the formulation and expression of grievances and aspirations, facilitating the celebration of events, and, importantly, influencing public policies.”

But civil-society organizations in Venezuela face repressive laws and regulations that restrict them from exercising their freedoms of assembly and expression. One such law is the 2017 “law against hate,” which the Maduro regime has used to silence dissent, including online.

Between March and December 2020, Venezuelans nevertheless participated in nearly eight thousand protests triggered by the political, economic, humanitarian, and health crises in the country. Of the sixty-five women who were detained in 2020, the majority were arrested during peaceful protests.

Women, including María Estefanía Rodríguez and Jurubith Rausseo García, have lost their lives while exercising their right to peaceful assembly. Rodriguez, a forty-six-year-old single mother of three, was shot dead while protesting in the state of Lara in 2017, and García, a twenty-seven-year-old woman, was shot near Caracas during a demonstration in 2019.

How the Maduro regime is exploiting the pandemic

The Maduro regime’s use of the military and irregular armed groups to instill fear in the population during the pandemic has been well-documented and reported by civil-society and nongovernmental organizations. According to Human Rights Watch, the regime used a state of emergency implemented in response to the health crisis as “an excuse to punish dissent and intensify their control over the population.”

Since the regime imposed COVID-19-related lockdown measures in March 2020, political persecution and arbitrary arrests have increased in Venezuela. Female victims experience regime intimidation differently than men do, facing gendered attacks such as sexist comments, public humiliation, and online gender-based violence. While detained, women have been subjected to sexual and gender-based violence (SGBV), including forced nudity and sexist insults. In April 2020, for instance, Andrea Bianchi—the girlfriend of a member of opposition leader Juan Guaidó’s team—was arbitrarily detained, beaten, stripped, and threatened with sexual abuse. Former National Assembly Deputy Delsa Solórzano identified the aggressors as members of the Special Actions Force, a command of the Bolivarian National Police of Venezuela.

Security forces have also targeted healthcare workers and journalists. After alerting her colleagues to the first case of COVID-19 in the Pedro Emilio Carrillo Hospital in the city of Valera, Andrea Sayago, a bioanalyst, was forced to resign, detained for two days by members of the Bolivarian National Intelligence Service for “acts of terrorism,” and charged with misuse of privileged information. Sayago and her lawyers have not been able to see her case file.

In a separate instance of high-handedness in March 2020, journalists Ariadna García and Tairy Gamboa were detained by police officers and forced to delete footage after reportedly covering people shopping in Sucre state during the government-ordered lockdown.

In response to the regime’s crackdown on human-rights defenders and nongovernmental organizations, the United Nations on February 18 urged Venezuelan authorities to “review restrictive laws and practices to ensure compliance with Venezuela’s obligations under international human rights law, and respect and protect the work of civil society, including women human rights defenders.” Although UN investigators have implicated the Maduro regime in crimes against humanity, there has been no justice for the victims of these human-rights violations.

Besides facing human-rights violations, many women in Venezuela are unable to obtain a minimum standard of living. Venezuela’s political, economic, humanitarian, and health crises have exacerbated existing gender inequalities and disproportionally affected women and their access to healthcare, economic opportunity, and security. Without the right to peacefully mobilize and without protection from arbitrary detention, women are hindered in their efforts to demand change for themselves and for Venezuelan society as a whole.