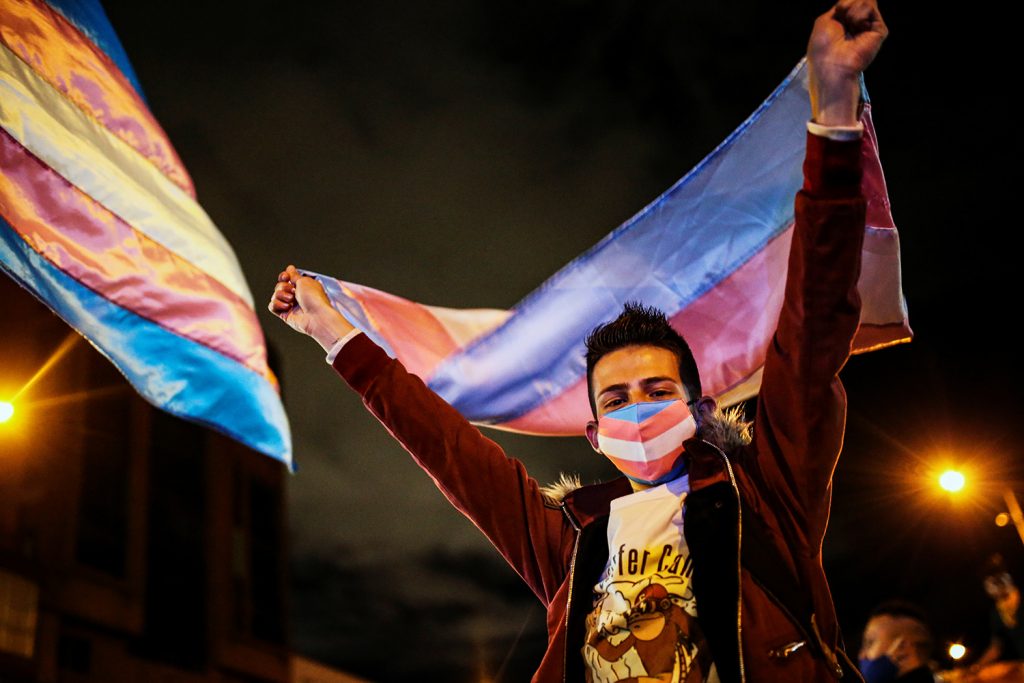 The 110th International Women’s Day, celebrated this year, hailed the achievements of women. It encouraged people to raise awareness about gender-based issues and call for further action toward gender parity in a post-COVID-19 world. There is one group of women, however, that has been left behind in these conversations: trans women.

Gender and sexual minorities remain among the most vulnerable groups worldwide, and this is particularly true for trans women. Three hundred and fifty trans and gender-diverse people were murdered globally in 2020, a 6 percent increase from 2019, according to data gathered by Transrespect Versus Transphobia Worldwide (TvT)’s Trans Murder Monitoring project. That continues the trend of year-over-year increases in murders since 2008. Nearly all, or 98 percent, of those murdered were trans women or trans-feminine people. Eighty-two percent of all those murders happened in Central and South America. Forty-three percent happened in Brazil alone.

But anti-trans violence is not contained to any single region and often coincides with belonging to another marginalized group. In 2020, 79 percent of the twenty-eight trans people murdered in the United States were people of color, and 50 percent of the eleven trans people murdered in Europe were migrants. As TvT has explained, it is impossible to estimate the number of unreported cases because most countries fail to collect systematic data and authorities, families, and the media often misgender victims. To begin to address the gamut of challenges and threats trans and gender non-conforming people face, countries will have to promote and protect trans rights globally as well as advocate for and support increased trans political representation.

The state of LGBTI representation

Among more than 519,000 elected officials in the United States, there are only 979 LGBTI people in elected positions (or 0.19 percent). There are only forty-nine trans and gender non-conforming elected officials (or 0.009 percent), and thirty-three of them are trans women. These numbers, tracked by the Victory Institute’s Out for America 2020 map, show an 88 percent increase in the number of LGBTI elected officials since November 2017, following US election cycles in 2018 and 2020 that were dubbed “rainbow waves” because of the historic numbers of LGBTI candidates who ran in and won elections. Even so, the estimated 5.6 percent of the US population that is LGBTI is still seriously underrepresented in elected office, and those who do run for office are frequently subjected to homophobic and transphobic attacks.

In Latin America and the Caribbean, where reports of murders of trans and gender-nonconforming people are high, the state of LGBTI rights and representation is not much different. Many countries in the region made progress in the expansion of LGBTI rights and policies (e.g., decriminalization of homosexuality, same-sex marriage and adoption, and the right to serve in the military) in the last two and a half decades, albeit unevenly and with a corresponding backlash that has led to stagnation in recent years. There are certainly Latin American trans women trailblazers such as São Paulo State Deputy Érica Malunguinho da Silva, Ecuador National Assemblywoman Diane Marie Rodríguez Zambrano, Uruguayan Senator Michelle Suárez Bértora, and Venezuelan National Assemblywoman Tamara Adrián. But, much like in the United States, trans women in elected office throughout Latin America and the Caribbean are few and far between.

LGBTI rights and representation at the local level: a catalyst for national change

Having LGBTI representation in legislative bodies increases the likelihood of passing legislation beneficial to the very groups that these legislators represent, according to Andrew Reynolds, director of the LGBTQ Representation and Rights Initiative at the University of North Carolina at Chapel Hill. Other studies indicate a “snowball effect” in which local policy action leads to state and federal action.

These bottom-up phenomena also manifest in Latin America and the Caribbean, explains Javier Corrales, a professor at Amherst College, in his analysis of how LGBTI rights and representation have evolved in the region. In countries such as Brazil and Uruguay, social movements have been more successful when they established strong ties with political parties. For example, social movements that allied with the Workers’ Party in Brazil and the Frente Amplio in Uruguay, in support of efforts ranging from anti-discrimination and civil-union legislation to national coverage for gender confirmation surgery, succeeded in passing some of these beneficial policies.

Similarly, in countries that rely on federalism as a system of governance, like Argentina, Brazil, and Mexico, social movements have been able to achieve incremental gains at the subnational level that allow for policy experimentation and may change the status quo or pave the way for the same gains at the national level later. Investing in trans political leadership at all levels is thus important not only to improve the lives of those within these leaders’ jurisdictions but also to advance progress everywhere.

An increasingly globalized world has fostered unprecedented international solidarity among LGBTI people and allies, as they continue to connect online and take advantage of newfound access and exposure to queer content and cultural forms. Nonetheless, anti-LGBTI sentiment and frequent targeting of trans people by conservative groups have had grievous repercussions for LGBTI communities. Anti-LGBTI sentiment and targeting may also be on the rise because of the pandemic. To lessen the spread of COVID-19, governments in Colombia, Panama, and Peru imposed gender-based curfews that failed to account for trans people. In Bogotá, that has resulted in increased discrimination and violence against transgender citizens by the public and police trying to enforce the curfew.

This is a matter not only of human rights but of democracy, economic development, and geopolitics. At the ninth Summit of the Americas in April, the Biden administration and LGBTI allies in Latin America and the Caribbean must work in tandem to change the global narrative around issues related to gender and sexuality—and commit to advancing a trans-inclusive agenda. To refuse to act despite the dire circumstances is to allow the loss of more trans lives.

Joseph Rojas, Jr. is a participant in the Atlantic Council’s Young Global Professionals Program and an intern at the Adrienne Arsht Latin America Center.

In Latin America and the Caribbean, this year’s Human Rights Day marks a grim trend as COVID-19 sets back decades of progress for women and girls. And without enlisting everyone, including men, in the fight for women’s empowerment, society’s ability to achieve gender equality is limited.

Image: A demonstrator with a transgender pride flag and face mask looks on during a protest against the murders of transgender people in Colombia, in Bogota, Colombia July 3, 2020. REUTERS/Luisa Gonzalez