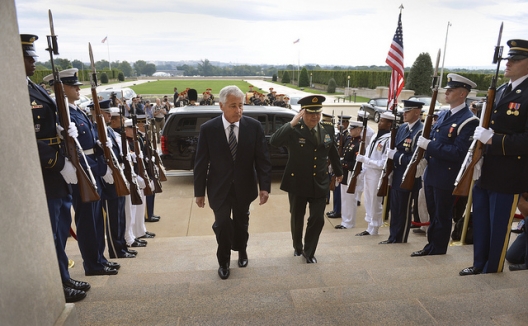 Hugh White’s recent post appears to question the premise of my recent East Asia Forum piece arguing that counterbalancing China is not containment, implying that it is a distinction without a difference. He argues that the US strategic goal in Asia is to maintain its primacy, something that China’s rise is overtaking. It is the merits of this aim, White argues, which need to be debated before arguing over distinctions between counterbalancing and containing, what he sees as the means of maintaining the ends: US primacy in Asia.

This argument confuses the means with the ends. Strategies are means not ends, and US primacy in Asia is better seen as a means. Ends are what President George H. W. Bush referred to as ‘the vision thing’. At the end of the Cold War, it was ‘Europe whole and Free.’ The United States’ vision for Asia is to achieve an open international order, marked by freedom of navigation and unimpeded access for commerce and the new global commons, cyber and space.

US leadership and its security presence in Asia has and continues to support and sustain this vision of regional order, one that is shared broadly across the Asia Pacific region — indeed, East Asia has prospered to an unprecedented extent over the past four decades as a result of the United States’ commitment to this vision. Of course, the diffusion of global power as a consequence of the success of East Asian and other G20 economies requires adjusting the distribution of power in the international system to more accurately reflect political realities. For the US, this is increasingly reflected in a more primus inter pares, or ‘first among equals’, policy approach, as is evident in its embrace of Asia’s evolving multilateral political, economic and security structures.

The United States’ security presence in East Asia, exercised through its bilateral alliances and security partnerships, is widely recognised across the region as an essential public good underpinning stability and prosperity in the Asia-Pacific. The US security presence reassures allies, helps secure maritime freedom on which the regional economy depends, and tends to constrain historic military competition and rivalry among actors in the region. This is evident in the United States’ current reinforcing of relations with allies and growing security partnerships in the region.

Social science is fixated on putting reality into categories, but in the real world things are often more complex. The notion of a binary reality — US primacy or not — misses the dynamic unfolding in East Asia. China has carved out a larger role as it has integrated itself into the global and regional economy — it has grown from a US$200 billion economy to one that is now more than US$7 trillion, and its defence spending has now reached some US$120 billion. The US, as one of China’s largest export markets, has facilitated this evolution with its foreign direct investment and its support for China’s entry into the WTO, as have China’s neighbours throughout Asia.

The US counterbalancing role has been aimed at shaping the parameters of China’s growing role so as to achieve the ends of an open international order. This was obvious in the 1996 Taiwan Strait missile crisis when the US used a show of force to make the point that disputes are to be resolved peacefully and not through intimidation or use of force. In the decade that followed, Beijing gave every indication that it had learned from the crisis as it moved to assure its neighbours of China’s peaceful rise.

But in the aftermath of the global financial crisis, Beijing appeared to think the US was in terminal decline and its moment of re-emergence had arrived. How else to explain the stark comment of then Chinese foreign minister Yang Jiechi in 2010, (reminiscent of Thucydides) in regards to China’s behaviour in the South China Sea disputes, who said bluntly: ‘China is a big country and other countries are small countries, and that’s just a fact’.

In effect, China’s intimidating demeanour has been an exercise in self-containment, and has pushed nations from India to Vietnam to increasingly bandwagon with the US and, increasingly, with each other to seek, and indeed facilitate, the US to sustain its historic role in the region.

To turn Hugh White’s argument on its head, China’s aspirations are not just about displacing US primacy. It is one thing for China and other emerging economies to want a larger role in shaping rules commensurate with its new economic and strategic weight. But it is quite another to rewrite the rules unilaterally as many fear may be the outcome of China’s ambitions. The difference is one between a rising power accommodating the existing order and working from within to reshape it rather than disrupting it from without.

The argument that there are options other than choosing between competing against China for primacy or abandoning Asia to China is correct. The US has increasingly moved from primacy to primus inter pares in its approach to the region, as seen by its engagement with Asia’s multilateral political and economic structures. The other options do require a combination of accommodation and constraint, as Hugh White suggested.

But accommodation is a two-way street. If Beijing views the US role in East Asia as a historic aberration, it is incumbent on China to define how a more prominent China would accommodate US interests. Beijing must define an approach to the region that reflects a balance of interests with other actors in the Asia Pacific rather than pursue a narrow nationalistic approach centred on redressing historic grievances. Otherwise, its sought-after ‘new great power relationship’ remains an empty shell.

Robert A. Manning is a senior fellow with the Brent Scowcroft Center on International Security. James J.Przystup is a senior fellow at the Institute for National Strategic Studies, National Defense University (NDU). The views expressed are his alone and do not necessarily represent the views of the NDU, the Department of Defense or the US Government.