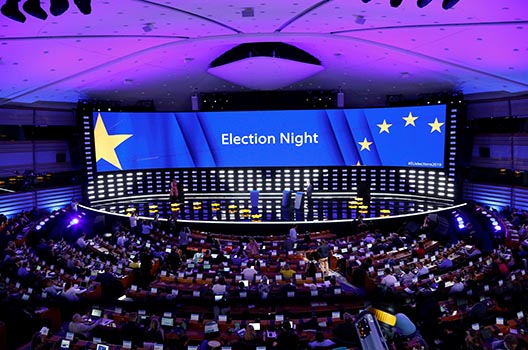 The recently concluded European parliamentary elections have fractured longstanding political alliances. From the Liberal and Green parties to the populists and Euroskeptics, voters have delivered a more fragmented European Parliament. Challenges abound as the European Union (EU) needs to among other things address climate change, rekindle sustainable economic growth, and address foreign policy issues. All of these are pan-European issues, which will require looking beyond national borders and setting up new coalitions to craft policy directions. The European Parliament can serve as a forum to reconcile Europe and its citizens, provided it becomes a public square for transnational debate.

The European parliamentary elections—held this year from May 23 to 26—are one of the largest democratic displays in the world. Many observers, however, often view them as a “strange beast” and consequently ignore the consequences. The European Parliament shares responsibility with the European Council in crafting European legislation and the budget of the European Union (EU). As it appoints the president and members of the European Commission, the policy priorities it defends matter a great deal.

Members of the European Parliament, if they organize across countries and group by political affinity, can exert decisive influence in enabling, delaying, or preventing new legislative proposals from being adopted.

Most commentators expected a largely fragmented political landscape to emerge from this year’s elections; and indeed, the traditional parties at the left of center or right of center shrunk.

Voter turnout was a source of concern ahead of the elections. Since the first European elections in 1979, which had a 62 percent turnout, voter turnout has steadily declined reaching 42.6 percent in 2014. This year, turnout climbed above 50 percent—a welcome sign of support for democracy at the European level.

Over the past four decades, the EU has grown from nine to twenty-eight member states. The bloc’s decisions have increasingly intersected with national policy making, transforming the European elections into a much-needed massive democratic exercise, to convey the preferences of European citizens.

The European Parliament is the only EU institution that is directly elected. Its responsibilities span legislative, supervisory, and budgetary matters. The European Parliament, the Council of the EU, and the European Commission together deliver initiatives or legislation on issues, including roaming mobile charges, data privacy, migration, trade deals, investment, and protecting the environment. Such policies affect European citizens. Therefore, public engagement early on in the decision-making process is paramount.

While the European Parliament’s political composition influences policy decisions, very often European citizens do not make this connection. Take for example the liberalization of rail transportation in France. This entailed implementing decisions that had been taken at EU level by European member states in the Council together with the European Parliament after several years spent debating and crafting these decisions. Once the European-level legislation was ready to be implemented at the national level, national debate and popular resentment were reignited and directed at the French government.

The results of the European parliamentary elections in a member state rarely match the political composition of the national parliament in that country. This is due to the nature of this election (often seen as very different from national elections), the timing (usually not synchronized with any particular national electoral cycle), and the use of diverse national voting systems across member states (more proportional voting systems).

This creates scope for members of the European Parliament (MEPs) to set aside traditional party affiliations and debate within parliamentary groups and committees with the goal of developing policies that are relevant to European citizens. Given the diversity of views represented in the European Parliament and the challenges that face the EU, the new assembly will need to find common ground on issues that are of common European interest and can be supported by coalitions of different political leanings.

In addition, MEPs have the opportunity to reach out to like-minded colleagues who represent different countries. Seizing these opportunities is key to creating space for political dialogue on pan-European issues. Coalition-building will be essential, albeit more complex than in the past. This could be a game-changer in future parliamentary debates at a time when the influence of traditional political parties in the European Parliament is bound to fade.

Pessimists will argue that such a political landscape will make it harder to find common ground on the contours of future policies or may even lead to setbacks. But optimists will see this as a welcome renewal, which could trigger new thinking about what is required for Europe to thrive.

Notably, fault lines on economic matters could become more apparent, for instance between parliamentarians who defend economic protectionism or economic nationalism and the proponents of globalist or liberal stances. The same will be true for migration. Newly elected MEPs could seek to find the political space available in cross-country or cross-political group cooperation. For instance, the electoral success of the Green parties will need to translate into action. European citizens wish for their leaders to do much more to address climate change and build a sound environment for future generations. Consequently, strong political alliances could emerge on climate change.

Cross-country and cross-group alliances will also be necessary when it comes to choosing the next president of the European Commission (and indirectly candidates for other EU top jobs), and to ensuring an effective legislative process.

This year’s European parliamentary elections, rather than being about the “European project,” played a role in exposing the dividing lines on policy choices made at the European level. More so than in the past, candidates attempted to discuss how they envisaged policies that will shape the future of European citizens. In addressing upcoming economic, social, and environmental challenges, voters pointed future decision-makers in at least one clear direction, that of addressing climate change as a matter of urgency. This will require transnational and cross-party coalition building.

Image: A general view of the Plenary Hall during the election night for European elections at the European Parliament in Brussels, Belgium, May 27, 2019. (REUTERS/Francois Lenoir)