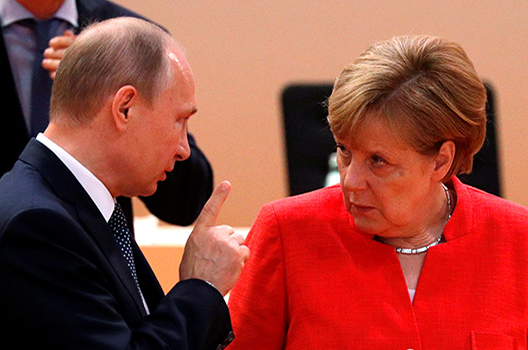 As German Chancellor Angela Merkel and Russian President Vladimir Putin meet on Saturday near Berlin, several items will be on the agenda, including the war in Syria, the conflict in east Ukraine, and US tariffs. The most important item, however, will be the Nord Stream 2 pipeline bringing Russian gas to Germany. The Nord Stream 2 project has faced harsh criticism from both partner EU countries and Washington and reflects the continued complexity of the German-Russian relationship. Merkel’s need to balance her interests between her Western allies and Moscow means that her meeting with Putin will likely produce an empty-promise agreement on Nord Stream 2, with Russia saying that it will continue its gas transit via Ukraine even after the pipeline is completed.

Nord Stream 2 is the second pipeline that will bring Russian gas to Germany under the Baltic Sea and one that by bypassing Ukraine would potentially cut Kyiv out of the gas transit business. Western allies also worry that it would also increase both Germany and the EU’s reliance on Russian gas imports to more than 40 percent. Given that Russia is known for using energy as a tool of foreign policy, exporting corruption via its business dealings and seeking to fracture the unity of the EU and NATO, the Nord Stream 2 pipeline is about much more than gas for both Washington and the European Union.

The Trump administration has threatened to sanction the Nord Stream 2 pipeline, which it argues would make its European allies too dependent and vulnerable to Russia. A proposed energy bill by Senator John Barrasso (R-WY) would mandate sanctions on companies involved in the Nord Stream 2 project and facilitate the exports of American liquefied natural gas (LNG) to NATO allies. Washington’s push against Nord Stream 2 during a downturn of trade and diplomatic relations with Germany, however, is putting Merkel between a rock and a hard place.

By signing up to Nord Stream 2, Germany is seemingly turning its back on the European Union at a time when it is seeking a leadership position. Germany has the largest economy, greatest population, and loudest voice in Brussels, but Nord Stream 2 runs directly counter to EU’s energy security strategy, which argues that the Union must diversify its energy sources, suppliers, and routes. More than a dozen EU member states, led by Poland, oppose the pipeline project, driving a further rift in the Union.

Berlin’s pursuit of Nord Stream 2 is also souring its relations with Ukraine, as the new route would divert much-needed transit fees from the country and could free Russia’s hand by ensuring that further military action eastern Ukraine would not interrupt gas flows to Western Europe. While Germany has sanctioned Russia for its annexation of Crimea and has been one of the key participants in the Minsk agreements calling for a ceasefire in eastern Ukraine, Nord Stream 2 threatens to damage its image as a protector of Ukraine’s sovereignty.

On the other hand, German-Russian relations are multi-dimensional, and their complexity is not always appreciated in Washington and other European capitals. Despite Germany’s Cold War history, sentiments on Russia vary widely across the political spectrum, and Merkel must hold together a tenuous political coalition. The left-wing of Merkel’s coalition partners, the Social Democrats, favor closer cooperation with Putin, going back to Merkel’s predecessor, social democrat Gerhard Schroeder.

Schroeder approved the first Nord Stream pipeline and its financing guarantee in 2005 during his time as Chancellor and, upon leaving office, became chairman of the shareholders committee for the Gazprom-owned consortium, Nord Stream, and subsequently for Nord Stream 2. In 2017, Schroeder was appointed chairman of Russian oil giant, Rosneft. Over the years, Schroeder has lobbied for better relations with Russia, promoted anti-American sentiments in German politics, and has called Putin a “flawless democrat.” Although no longer a considerable power in German politics, Schroeder has come to represent the Kremlin’s strategy of gaining influence in European politics and business through sweet deals, posts, and financing. Schroeder is just one of many German politicians across the political spectrum that have avoided criticism of Putin and advocated closer cooperation with Russia.

In Germany, energy trade has long been perceived as a perfect vehicle for cooperation with Russia. In 1969 at the height of the Cold War, West German gas company Ruhrgas signed a twenty-year contract to import Soviet gas, forging a close relationship with Sojuzgazenxport (later part of Gazprom) and laying the foundations for the German-Russian energy trade and Ruhrgas-Gazprom collaboration that still exists today.

Merkel’s own center-right Christian Democratic Union party is far more hesitant about cooperation with Moscow and Merkel is known for her skepticism of Putin’s leadership. The German chancellor has also shown, however, a unique pragmatism on the need to hold together Germany’s increasingly fractured domestic politics, which has seen a rise of populist and radical parties.

In her meeting with Putin, Merkel needs to show that Germany’s allegiance lies with the EU and the United States rather than with Russia. In a perfect world, she would forego expanding the gas relationship with Russia, relying instead on new abundant LNG exports (including from the United States), which would give Berlin more opportunities for energy diversification.

However, Merkel’s domestic restraints make it more likely that we will see a soft compromise, where Putin promises not to abandon the transit of gas through Ukraine in return for the completion of Nord Stream 2. This would allow Berlin to save face in front of its European allies, Ukraine, and Washington. It is doubtful, however, that Moscow would actually adhere to such an agreement in the long term. Merkel, however, does not seem to have much of a choice and must walk a fine line between her Western allies, Germany’s dependence on Russian gas, and her domestic political allies.

Agnia Grigas, of the Atlantic Council, is the author of Beyond Crimea: The New Russian Empire and The New Geopolitics of Natural Gas. Follow her @AgniaGrigas and Grigas.net