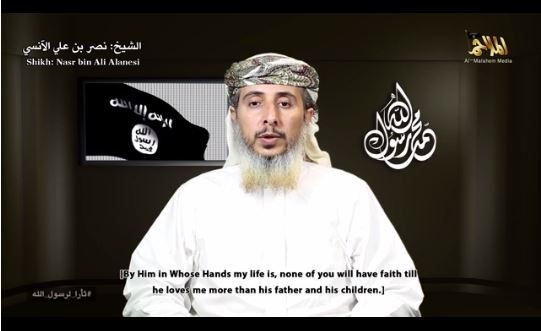 A leader of al-Qaeda in the Arabian Peninsula, Sheikh Nasr bin Ali Alansi, declares the group’s authorship of the Paris attacks in a video released by its media arm. (Al Malahim/ CC License)

Atlantic Council Analyst Says Debate on the Continent Is Revived

Today’s arrests and gun-battles in Belgium, as police intervened to prevent what they said were Islamist terrorist attacks in the making, underscore that last week’s Islamist violence in Paris may signal what Atlantic Council analyst Barry Pavel then called “a new normal.”

Europe’s round of violence is renewing public debates over how to balance state security measures against guarantees of civil liberties and privacy, says Atlantic Council Senior Fellow Nicholas Dungan. Dungan, who also is a senior adviser at the Paris-based Institute for International and Strategic Relations (Institut de Relations Internationales et Stratégiques) discussed Islamist violence in Europe with the Atlantic Council’s Ashish Kumar Sen:

Q. What do we know about the situation in Belgium?

Dungan: Some reports in the Belgian media, so far not confirmed by the authorities, say that the guns used in the Paris attack came from Belgium.

One of the questions you have to ask about the Paris attacks is ‘Where would anybody in France be able to get that kind of weaponry?’ In the United States you can go to WalMart and buy a gun. Not in Europe. So there has to be some terrorist or criminal supplier to get the kind of equipment that they had in Paris.

The second thing that strikes me, which people have emphasized right from the beginning — even before 9/11 — is the asymmetric nature of these threats. Five terrorists mobilized 88,000 French security forces last week and France, Europe and the world held their breath for three days, based on the criminal, terrorist actions of fewer than half a dozen people.

Third, the terrorists have chosen soft targets. They haven’t assassinated any leader of any major Western country, any country that is perceived as their enemy. They have gone after ordinary citizens. That’s what 9/11 was about, 7/7 in London, the Madrid bombings, the attacks in Paris last week and, apparently, the plot that was just foiled in Belgium.

Q.  Last year a gunman killed four people at a Jewish museum in Brussels. The Belgian Islamist militant organization, Sharia4Belgium, is at the center of a trial in Antwerp in which 46 members of the group have been accused of belonging to a terrorist organization. Why does Belgium have this problem with Islamist violence?

After 9/11, the US went into a paroxysm of homeland security. As overdone and sometimes farcical as it might appear, it actually also appears to have worked. We will see more of this in Europe. You now have paramilitary commandos on the streets of France guarding Jewish schools. It might well be that we’re going to end up living with more of this.

The big question that comes up again and again is: what is the price in terms of personal freedom and privacy which citizens in a democratic society are willing to pay for public and personal security? France is now talking about whether they should adopt something like the [United States’ 2001] Patriot Act. It may very well be that people in Western societies will be willing to sacrifice considerable individual liberties in return for perceived personal safety and public order.

Q.  French President Hollande said last week that French authorities had disrupted many terrorist plots. Today in Belgium reports say these terrorist suspects were planning a major attack. Many of the Westerners who have joined Islamist ‘jihads’ in the Middle East, in Syria in particular, are believed to be Europeans. Are these people now bringing their jihad back to Europe?

It would seem they are. What they seem to be are citizens of European countries who, nonetheless, come from a background which may be an ethnic background, or a socio-economic background, or a religious background, which makes them particularly susceptible to conversion to jihad. Combine all three of these factors and you end up with people who are looking for a sense of purpose in life.

With respect to returning jihadis, the big difference between Europe and the United States is that to some extent the United States is a harder place to get into. There is only one open border and that’s with Canada. There has been less immigration to the US from certain parts of the Arab world, for well-known historical reasons. Europe is likely to remain on the front line of this problem for some time to come.