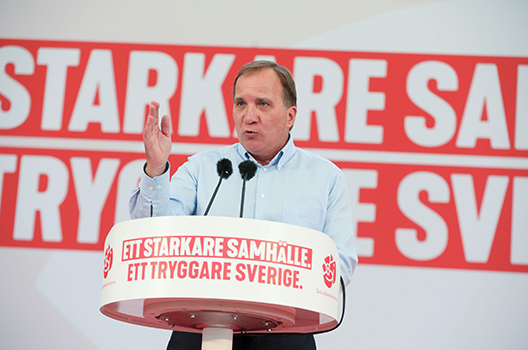 The Swedish elections on September 9 could set the country on a path to joining NATO as a full member. Opinion polls do not show a clear winner in the elections. Neither the center-left Red-Green coalition government, that has run the country for the past four years, nor the main opposition center-right bloc has a commanding lead. However, if the four-party opposition bloc—consisting of the Conservatives, the Liberals, the Center Party, and the Christian Democrats—wins it will likely steer Sweden toward NATO membership.

The opposition supports NATO membership as a way to minimize the insecurity Sweden would face in case of a crisis or war, by adding security guarantees to the already close relationship Sweden has with the Alliance. In addition, membership would increase Sweden’s ability to deter potential threats before they materialize. Membership supporters also argue that Sweden, as part of the Western community, should work within NATO to support it as a liberal institution.

Sweden’s present security doctrine was adopted unanimously by parliament in 2009. It is a far-reaching, unilateral declaration of solidarity, which covers all other European Union (EU) member states (in accordance with the EU Treaty of Lisbon), as well as Nordic countries that are not members of the EU. Given that “Sweden is not a member of any military alliance,” this doctrine stipulates that “Sweden will not remain passive if another EU member state or Nordic country suffers a disaster or an attack. We expect these countries to take similar action if Sweden is affected. Sweden should, therefore, be in a position to both give and receive military support.”

Sweden officially abandoned neutrality, as did Finland, when it joined the EU in 1995. The choice to remain outside of military alliances should not be confused by a wish to remain passive in case of crisis. There is a broad recognition among Swedish politicians that security in the Baltic Sea region is highly interdependent and must be built in concert with other countries, regardless of NATO membership.

Since the end of the Cold War, Sweden has cooperated with NATO in international peace keeping missions and gradually become its closest partner, alongside Finland. The deteriorating security situation in the Baltic Sea region since 2014 has spurred collaboration even further. Sweden and Finland are nowadays as interoperable with NATO as most other allies. They take part in advanced exercises focusing on collective defense, such as the upcoming “Trident Juncture” in Norway, and work closely with NATO on a range of political and military issues, including information and intelligence sharing.

The closeness between Sweden and NATO was highlighted when US Secretary of Defence James Mattis met with his Swedish counterpart Peter Hultqvist in Washington in May 2017. Mattis declared that if the Russians would come, “America will not abandon democratic allies and partners, and we will stand with Sweden. . . It’s not a NATO ally, but it is still, from our point of view, a friend and an ally.”

As an official Swedish inquiry on NATO membership concluded in 2016, NATO would most likely welcome Sweden as a member of the Alliance, and the accession process could be compressed to take about a year.

Obstacles to push NATO membership ahead will be found closer to home. In order for a push in this direction to succeed, a range of hurdles must be overcome. These include gathering broad parliamentary support, a majority of public opinion, avoiding a referendum, raising defense spending to 2 percent of gross domestic product (GDP), and maintaining strong relations with Finland.

First, broad parliamentary support for NATO membership will not be easy to gain. If the opposition wins, it will form a minority government. Most likely, a majority of parties in parliament will still be against NATO membership. From their perspective, military non-alignment upholds some kind of balance of power in the Baltic Sea area and enhances the region’s strategic stability in an era of notable turbulence. These parties see no reason why Sweden should “rock the boat.” The prime ministerial candidate from the Conservative Party, Ulf Kristerson, recognizes the dilemma: “We will not throw in an application as soon as it is technically possible. But the Social Democrats do not have an eternal veto either. We will methodically approach NATO and seek support for full membership.”

Second, even though public opinion has shifted since 2013 toward supporting NATO membership, different opinion polls show different results. Quite a large number of Swedes indicate that they do not have a clear opinion on the matter. The majority rarely reaches more than 45 percent in support of membership. From NATO’s point of view, these numbers should preferably stabilize around at least 50 percent as the accession process proceeds.

There are strong advocates for a referendum on NATO membership, even though that is not formally required. Parallels are drawn to the Swedish referendum held on EU membership in 1994. The challenge for the government would be twofold: given the opinion polls, it is not obvious that “yes to NATO” would win and there would be a substantial risk for disinformation campaigns by external actors to spur skepticism among the public to join NATO.

Raising defense spending to 2 percent of GDP by 2024 is not a fixed requirement for NATO membership, but given the harshness of US President Donald J. Trump’s criticisms on the matter, Sweden would most likely have to present a credible national plan on how to reach the target. Given the current level of about 1 percent of GDP spending, that would be a challenge for the new government. Presently there are no such plans, even though the Conservatives have indicated that such a target should be reached by 2028.

Finally, close contact and coordination with Finland is needed in order to proceed with Swedish NATO membership. Ideally, Sweden and Finland would join NATO hand in hand, as they did with the EU in 1995. Given their close bilateral defense cooperation, which also includes operational planning beyond peacetime, as well as their geographic proximity, historical ties, and closeness to NATO, that would be the most natural path to follow. But in Finland, public opinion has not shifted toward joining NATO, and there is no majority of political parties for membership either. Hence, Sweden would have to be careful not to leave a non-NATO Finland in a vulnerable position next to an aggressive Russian neighbor. There is also a crucial psychological dimension to consider. The Finns have not forgotten the shock in 1990, when the Swedish government declared its intention to join the EU without consulting or informing Finland in advance. The mistrust it created still needs healing.

Even if the opposition wins the elections and forms a new government with Swedish NATO membership on the agenda, a formal application would not reach NATO Secretary General Jens Stoltenberg—a former prime minister of Norway—until political skillfulness has been successfully applied at home.

Anna Wieslander is director for Northern Europe at the Future Europe Initiative, Atlantic Council. Follow her on Twitter @AnnwieAnna.