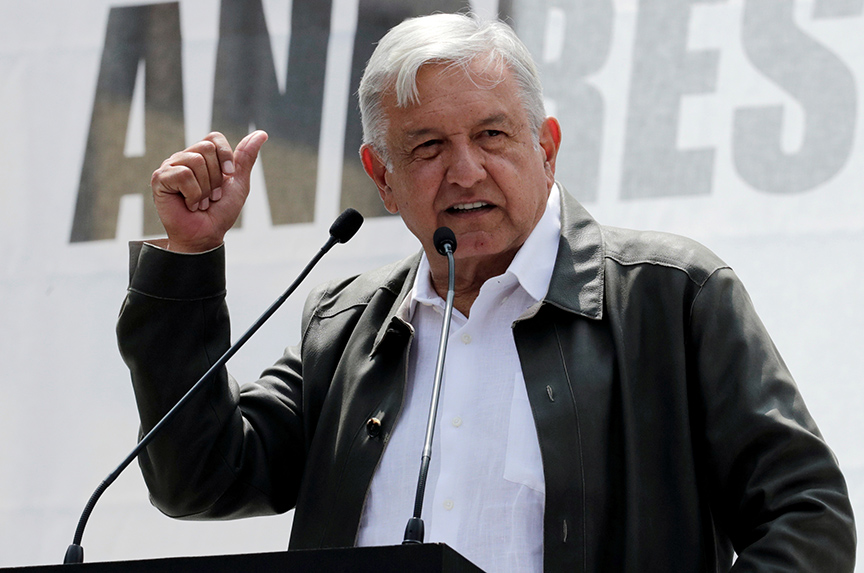 Mexico’s president-elect, Andrés Manuel López Obrador, attended a rally, part of a tour to thank supporters for his victory in the July 1 election, in Mexico City, Mexico, on September 29. He will be sworn in on December 1. (Reuters/Henry Romero)

Andrés Manuel López Obrador has his work cut out.

The populist leader, who is more popularly known as AMLO, will be sworn in as the president of Mexico on December 1. This may be good news for the US-Mexico relationship.

“The numerous visits by US officials during the transition are Exhibit A,” he said. “But key to the foundation of the relationship will be advancing the USMCA [a revised trilateral trade deal between the United States, Mexico, and Canada]. A new North American trade deal, although not perfect, will be essential for underpinning the bilateral relationship in the years ahead.”

The relationship between Trump and Peña Nieto was strained by differences over trade and immigration. On February 20, following an impasse with Trump over the US president’s call to build a wall along the United States’ southern border, Peña Nieto called off his planned visit to the White House.

“AMLO is a nationalist who believes in the greatness of Mexico. He will look to work with the United States,” Marczak said in an earlier interview with the New Atlanticist.

Katherine Pereira, an associate director in the Adrienne Arsht Latin America Center, said Mexico’s new president will have to “work to strengthen US-Mexico relations and to reinforce the importance of passing USMCA through a US Congress of newly elected members amid unresolved aluminum and steel tariffs.”

Trump, Peña Nieto, and Canadian Prime Minister Justin Trudeau signed the USMCA on November 30. It must still be approved by the US Congress where it, potentially, faces an uphill battle as Democrats take control of the House of Representatives in January.

Pereira said: “The desire to engage remains, with the United States sending the largest delegation we have seen to AMLO’s inauguration.”

“This is a new era for Mexico, with great potential for prosperity—a reality that often evades the discourse in the United States,” she added.

AMLO’s landslide electoral victory on July 1 marked a seismic shift for Mexico which from 1929 to 2000 was ruled by the PRI (Institutional Revolutionary Party), and after that by presidents from one of two mainstream political parties—the PRI and the conservative National Action Party (PAN). AMLO was a member of PRD—the Democratic Revolution Party—from which he split and formed Morena.

“AMLO was elected amid a wave of popular support for change, and the five-month transition period showed that he’s committed to sweeping reforms,” said Marczak.

“But,” Marczak said, “the honeymoon for AMLO will be short.”

“He takes office with new tensions at the US border, with Mexicans demanding quick security improvements, and with questions lingering from investors following recent public consultations. He will be faced with delivering on social improvements while courting the investment needed to propel Mexico’s promising economy,” Marczak said.

“The expectation of change is palpable. Now the real work begins,” said Pereira.

She said: “His first 100 days will be very telling as to how he plans to govern and how he may deliver on promises to root out challenges such as the rise in crime, stagnant wages, and corruption.”

AMLO hails from the southern state of Tabasco and is a former mayor of Mexico City. He ran unsuccessfully for the presidency in 2006 and 2012.

Marczak said AMLO “lived the life of what many people refer to as the ‘Two Mexicos.’”

“He saw firsthand the great divide between northern Mexico, especially Mexico City and the states along the US-Mexico border, and southern Mexico and the great inequality that exists on both sides of the country,” he said.