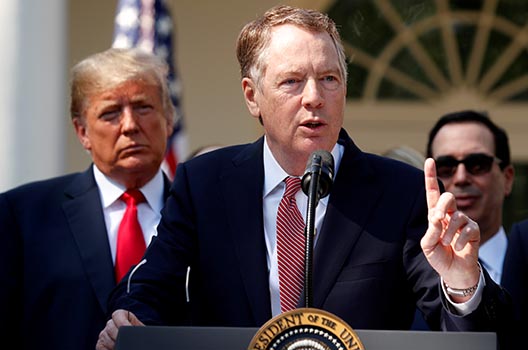 Over the past two years, the US-Mexican relationship has been marked by challenges on trade, immigration, and security. In June 2018, the United States, citing national security concerns, placed tariffs on Canadian and Mexican aluminum and steel. These tariffs cast a shadow over negotiations on the United States-Mexico-Canada Agreement (USMCA) and the subsequent processes to ratify the trade deal. The Trump administration’s May 17 decision to lift the tariffs is good news for the ratification of the USMCA.

In the midst of over a year of negotiations to update the North American Free Trade Agreement (NAFTA), the United States used Section 232 of the Trade Act of 1962 to impose tariffs—25 percent on steel and 10 percent on aluminum imports—on Canada and Mexico. The tariffs placed an additional hurdle in front of passage for the USMCA, NAFTA’s replacement. Mexico and Canada retaliated with tariffs on agricultural goods, mostly hurting US farmers. The application of Section 232, which allows tariffs on grounds of protecting national security, hindered trade and diplomatic relations between the United States and its neighbors.

Mexican Undersecretary of Foreign Relations for North America Jesús Seade and Canadian Foreign Minister Chrystia Freeland met US officials last week to discuss USMCA progress. Freeland is reported to have said that ratifying the USMCA would be “very problematic as long as tariffs remained in place.”

After the United States agreed to lift the tariffs, Mexico and Canada lifted their tariffs on US goods and Freeland said Canada would move quickly to ratify the USMCA.

Without the tariffs, the pathway for USMCA ratification is mostly cleared—at least for Mexico and Canada. There are renewed signs of the political will needed to push forward the ratification of the trade deal: US Vice President Mike Pence will meet Canadian Prime Minister Justin Trudeau in Canada to discuss the USMCA on May 30. Given that their economies are closely tied to US markets, there is a strong incentive for both Mexico and Canada to have a free trade agreement with the United States. In 2017, almost 80 percent of Mexico’s exports and 76 percent of Canada’s exports went to the United States; nearly 90 percent of Canadian steel and aluminum exports go to its southern neighbor.

Therefore, with the elimination of tariffs on aluminum and steel, Mexico and Canada are likely to ratify USMCA without further delays. The United States, however, has its own internal challenges. Some Democrats in the House of Representatives have openly expressed a reluctance to vote for the USMCA. They argue that the deal does not provide enough protections for workers and the environment. Richard Neal, Chairman of the House Committee on Ways and Means (D-MA), reportedly stated that “when it comes to the new agreement, House Democrats continue to have a number of substantial concerns related to labor, environment, enforcement, and access to affordable medicines provisions. Those issues still need to be remedied.” Notwithstanding, approval of the USMCA would provide trade certainty to the region.

The elimination of tariffs will also reduce tensions between the United States and Mexico. Other topics, like migration and security, demand continued strong cooperation and coordination between both countries. The migrant caravans crossing Mexico with the goal of reaching the United States, and the ongoing bilateral coordination to tackle drug trafficking and organized crime are just some important transnational issues that highlight the need for strong and stable relations between the North American neighbors.

Pablo Reynoso Brito is a program assistant with the Atlantic Council’s Adrienne Arsht Latin America Center, where he focuses mainly on Mexico and the USMCA.

Maria Fernanda Perez Arguello is an associate director with the Atlantic Council’s Adrienne Arsht Latin America Center, where she focuses mainly on Central America, Mexico, the USMCA, and anti-corruption efforts.

Image: US Trade Representative Robert Lighthizer discusses the United States-Mexico-Canada Agreement (USMCA) as US President Donald Trump and US Treasury Secretary Steven Mnuchin look on during a news conference in the Rose Garden of the White House in Washington, US, October 1, 2018. (REUTERS/Kevin Lamarque)