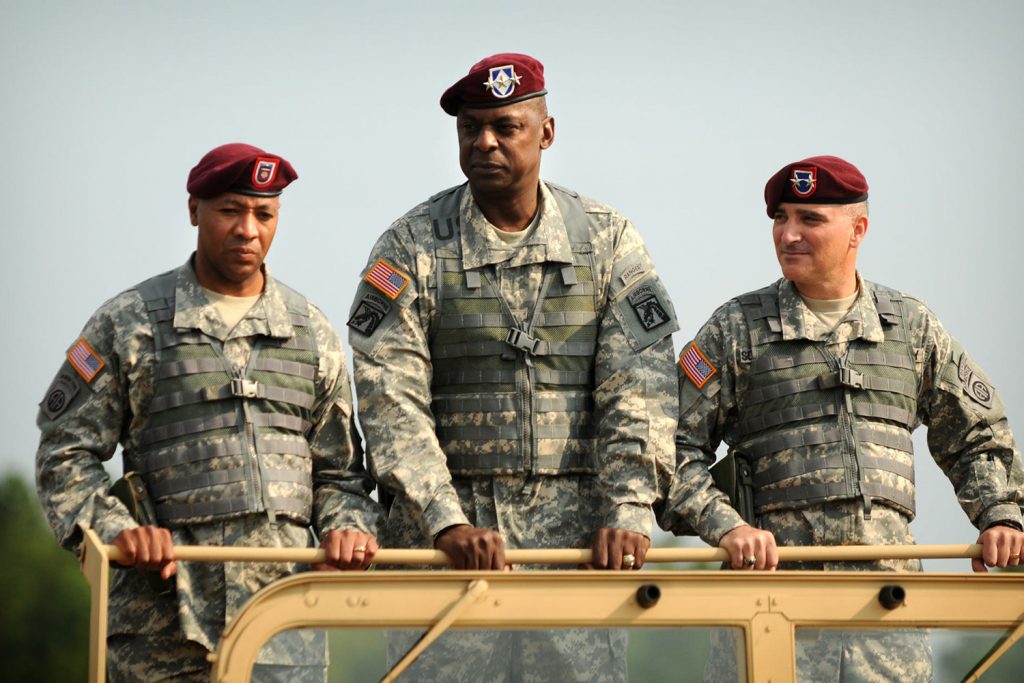 General Lloyd Austin landed in Iraq in September 2010 to assume command of US Forces-Iraq (USF-I), at that time the largest US military operation in the world numbering over 150,000 troops. I arrived in Iraq just before Austin, beginning my year-long service as political minister counselor at the US embassy in Baghdad in August 2010, working briefly with Ambassador Chris Hill and then as a member of Ambassador James Jeffrey’s senior leadership team. From the first day, Ambassador Jeffrey and General Austin forged the closest civil-military relationship I have ever seen. It’s no secret that their predecessors, Ambassador Hill and General Ray Odierno, did not work well together. Indeed, by the end of both men’s tours of duty, they had adopted sharply opposing views on how the United States should work with Iraq’s various factions, and these differences were undermining the ability of the embassy and USF-I to work cooperatively to stabilize Iraq.

General Austin and Ambassador Jeffrey turned things around very quickly, to everyone’s great relief. For starters, they agreed that whenever possible, they would meet jointly with Iraqi leaders. This was an especially important for the message to send to Iraq’s conspiratorially minded prime minister at the time, Nuri al-Maliki. Maliki had the support of the United States to form a post-election coalition government, but Washington wanted him to find an important role for Ayad Alawi, a former prime minister and head of the Iraqiya party, which had won slightly more seats than Maliki’s Rule of Law coalition in the last elections. General Austin and his small team of political advisers worked hand in glove with Ambassador Jeffrey and the embassy’s government formation team to make sure both Maliki and Alawi understood that we spoke with one voice. I often attended Austin and Jeffrey’s weekly meetings with Maliki, at which they worked out in advance how to pitch our long list of offers, requests, and concerns, sometimes combined with warnings and even threats, especially about the Iraqi government’s failure to stop the steady stream of rocket attacks being launched by Iranian-backed militias at both the embassy and USF-I bases. Austin and Jeffrey similarly engaged jointly with Iraq’s long-feuding Kurdish leadership to urge them to maintain their critical balancing role among the other Iraqi factions in Baghdad.

We all understood that the Obama administration wanted to end the US combat role and withdraw our forces. Before the emergence of ISIS several years later, the war appeared to have been won, as Iraqi forces carried out virtually all counter-terrorist and anti-militia combat operations and weekly death tolls dropped toward zero. The idea was that there would be a carefully-staged transition of responsibility for our relations with Iraq from a joint USF-I/Embassy mission to an embassy-led effort supported by a small US military training team. General Austin’s long experience in Iraq over the course of several combat commands combined effectively with Ambassador Jeffrey’s time as the deputy chief of mission at Embassy Baghdad after the United States and its coalition partners transferred sovereignty back to Iraq in 2004.

Austin and Jeffrey’s cooperated not only in their dealings with the Iraqis but also with Washington. General Austin joined Ambassador Jeffrey for secure video meetings with the National Security Council and State Department senior staff, and General Austin opened up his weekly secure video briefing from USF-I’s components to the ambassador and his team. Joint USF-I/embassy working groups planned the transition to the embassy’s leading role. As I prepared to depart Baghdad, Austin and Jeffrey had begun to approach the Iraqis about maintaining a residual US force to address several specific military tasks including counter-terrorism intelligence sharing, port and oil installation security, and securing Iraq’s airspace. Unfortunately, this effort collapsed as the White House repeatedly reduced the size of the forces on offer, the Department of Defense insisted there was no substitute for a status of forces agreement, and Maliki balked at presenting a status of forces agreement to the parliament. General Austin was a strong proponent of the residual force, but as the efforts to reach agreement on it failed, he carried out flawlessly his orders to withdraw virtually all our military forces. What happened next is well known.

Lloyd Austin was a great soldier, an inspiring commander to his troops, and a down-to-earth, approachable colleague who we civilians were privileged to work alongside. With his nomination as the next secretary of defense, there are legitimate concerns about civilian control of the military and the appropriate role of retired senior officers in government. There are also many who believe that the next secretary of defense should have a background in emerging threats from China and Russia, rather than our recent wars in the Middle East. Those concerns can and will be debated as Austin’s nomination proceeds. But from my time in Iraq, I can only share my appreciation for Lloyd Austin as a commander, as a man, and as an American patriot who spent most of his life in service to his country.

Ambassador Marc J. Sievers is a nonresident senior fellow for Middle East Programs at the Atlantic Council. Ambassador Sievers retired in 2019 as a career member of the senior foreign service, having most recently served as US Ambassador to Oman from January 2016 until November 2019.

Biden picks a general: Here’s how Lloyd Austin could reinforce civilian control at the Pentagon

With careful and consistent attention to the messages he sends through his words, actions, and appointments, there is no reason why a Secretary Austin can’t also succeed at reinforcing longstanding American ideals on civilian-military relations.